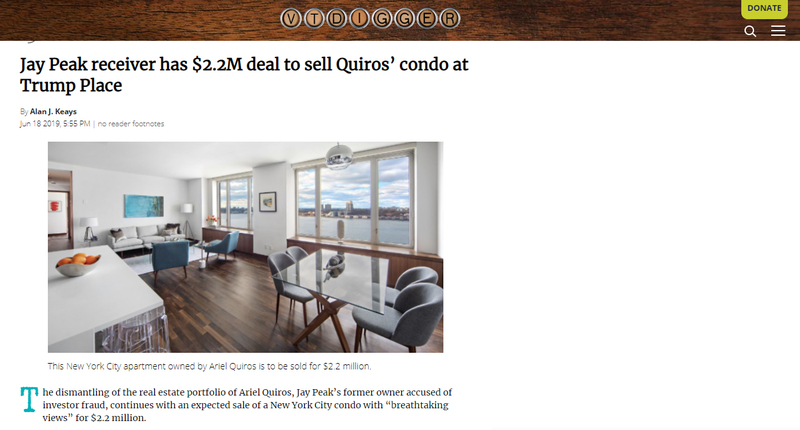 This New York City apartment owned by Ariel Quiros is to be sold for $2.2 million.

The dismantling of the real estate portfolio of Ariel Quiros, Jay Peak’s former owner accused of investor fraud, continues with an expected sale of a New York City condo with “breathtaking views” for $2.2 million.

Michael Goldberg, the court-appointed receiver overseeing the dismantling, wrote in a recent court filing that he intends to sell Quiros’ condo, unit 18L at 220 Riverside Blvd. and formerly known as Trump Place, for $2,220,000.

“The Receiver believes the sale is consistent with the market rate for condominiums of similar size and location and is in the best interest of the receivership estate,” Goldberg wrote in the filing.

“The sale will relieve the Receiver of the carrying costs needed to maintain the property and the proceeds of the sale will benefit the investors and other creditors.”

Goldberg did not return a call Monday seeking comment.

The sale comes about a month after a federal grand jury indicted Quiros, his former business partner Bill Stenger, and two of their associates on criminal charges related to a failed plan to build a biomedical research facility in Newport, raising $80 million from over 160 EB-5 investors.

Those criminal charges followed civil lawsuits by state and federal regulators more than three years ago in which the Newport project was termed “nearly a complete fraud.”

Quiros and Stenger both reached settlements in those lawsuits, but the criminal charges filed last month remain pending. To resolve the civil case brought by the U.S. Securities and Exchange Commission against him, Quiros agreed to surrender $81 million in properties.

Goldberg, the receiver, is now in the process of working to sell off those properties to recoup money for defrauded investors.

Last year, Goldberg sold off Quiros’ Fifth Avenue condo in New York City for nearly $4 million. That was the condo then-Gov. Peter Shumlin stayed at for a few days in May 2013 and June 2014, paying Quiros nothing to stay there, VTDigger reported last year.

According to Goldberg’s filing for the most recent sale, the Riverside condo in New York City’s Upper West Side measures 1,425 square feet and has two bedrooms and two bathrooms.

The building has a 24-hour doorman, health club with lap pool, spa, sauna, parking garage, and lounge, according to the listing.

Quiros purchased the condo in July 2013 for $2,385,000, allegedly with “ill-gotten gains” from his development projects. Goldberg wrote he listed the property with a real estate firm for $2,295,000 earlier this year.

“This is the third contract the Receiver has negotiated and the first that has been fully executed,” the filing stated.

The original offer of $2.2 million “was out for review” when a better offer of $2,250,000 came in, and that initial buyer refused to meet that higher offer, the filing stated.

Then, according to the filing, the second potential buyer fell through after raising concerns about purchasing a property from a receivership estate.

The latest buyers under contract to buy the condo “as is” for $2,220,000 are Lorne Schussel and Anna Klimowicz. The sale price, according to the filing, is “generally within the range of similar multi-bedroom, luxury condominiums in Manhattan.”

Goldberg still needs the approval for the sale from federal Judge Darrin P. Gayles, who is overseeing the SEC civil lawsuit and settlement. That case was brought in federal court in Miami, which is where Quiros resides and many of his businesses had been based.

Earlier this year, the condo board at the building where Quiros’ property is located voted to remove a sign on the front of the building reading, “Trump Place.”

In the recent filing by Goldberg, he wrote that he believed the sale price for Quiros’ condo was fair despite it being more than $150,000 lower than the 2013 purchase price.

The receiver added in a footnote, “News outlets have reported on the complications associated with selling a condominium associated with the Trump brand since the 2016 presidential election.”