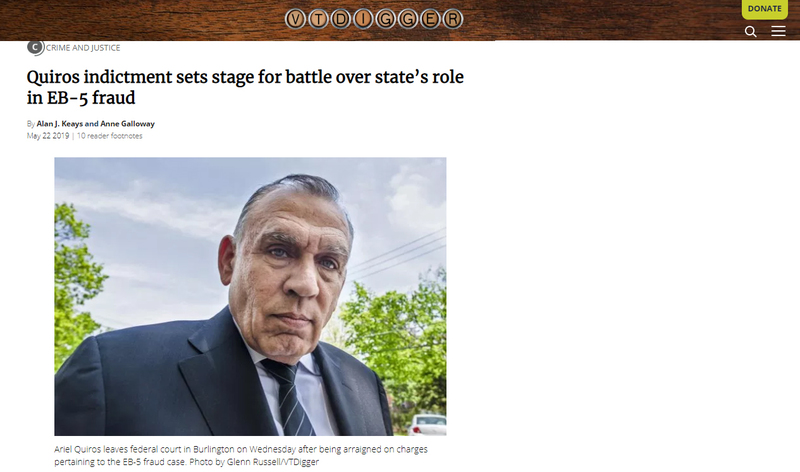 Ariel Quiros leaves federal court in Burlington on Wednesday after being arraigned on charges pertaining to the EB-5 fraud case.

The indictment of former Jay Peak owner Ariel Quiros could reveal the extent of the state’s role in the EB-5 scandal as he wages a defense against criminal charges brought by federal prosecutors.

In court Wednesday, Quiros pleaded not guilty to charges of money laundering and wire fraud. His lead attorney said documents from the prosecution’s investigation could expose state officials’ involvement in the scandal and shift blame for the $200 million investor fraud away from his client.

Levine didn’t name names but U.S. Sen. Patrick Leahy and former Govs. Peter Shumlin and James Douglas were big backers of the projects that are now at the center of the criminal case against Quiros and three of his former business partners, including former Jay Peak CEO Bill Stenger.

This notion of state involvement in the scandal was first raised by Quiros’ attorney in the civil case. Melissa Visconti used an “unclean hands” argument to mitigate civil charges brought by the Vermont Attorney General’s Office and the U.S. Securities and Exchange Commission.

Those civil cases were settled last year with no further litigation on the state’s role in the largest fraud case in Vermont history.

At a press conference held in downtown Newport in front of a hole in the ground left by the Jay Peak developers that is a somber reminder of the EB-5 fraud’s toll on the local economy, U.S. Attorney Christina Nolan said the criminal investigation was thorough and that her office looked into criminal culpability. “This is what we found,” she said.

“I’m not saying there’s not going to be more to the story in the days ahead,” Nolan said. “I will also tell you that it’s very clear from my presentation and from the grand jury indictment, that the regional center was lied to, over and over again, about different aspects of the project from the embezzlement of money to the fraudulent jobs and revenue numbers.”

‘The full story has not been told’

At the center of the U.S. attorney’s case brought Wednesday is AnC Bio Vermont, a proposed $110 million biomedical center in Newport that the SEC described as nearly a complete fraud in 2016 when it leveled 52 securities charges against Quiros and Stenger.

More than three years after federal regulators filed civil charges against Quiros, the mastermind of a $200 million fraud in the Northeast Kingdom, walked into a federal courtroom in handcuffs and was criminally charged with money laundering and wire fraud.

Shortly after officers removed the shackles from his wrists, the 63-year-old Quiros pleaded not guilty to a dozen criminal charges in connection with AnC Bio Vermont. Quiros was released after posting a $100,000 appearance bond, and agreeing to surrender his passport to authorities.

A criminal defense attorney for the Miami businessman said evidence pointing to the involvement of state officials is likely to be released.

Levine, Quiros’ attorney, told the judge exculpatory discovery material expected to be turned over by prosecutors under the Brady rule will likely be significant. That information would include records related to the involvement of state officials.

U.S. Attorney for Vermont Christina Nolan discusses the criminal charges surrounding the AnC Vermont project at the Newport site where another Quiros-Stenger project was supposed to be built.

Following the arraignment Wednesday afternoon, Quiros stood beside Levine as he spoke briefly to a group of reporters.

“We’re not going to make a comment on this case,” Levine said. “We’re just going to say it should never had been brought.”

The charges against Quiros include several counts of wire fraud, conspiracy to commit wire fraud, money laundering and making false statements to the federal government regarding AnC Bio.

When asked by Magistrate Judge John Conroy during the court hearing what he did for a living, the Miami businessman replied that he was retired.

When questioned further about what he did before his retirement, Quiros responded, “I was working as the owner of Jay Peak.”

Dressed in a black suit, white shirt and black tie, Quiros said little during his brief appearance early Wednesday afternoon in federal court. Asked for comment on the charges as he arrived at the courthouse Wednesday morning, the Miami businessman did not respond.

Bill Stenger arrives outside federal court in Burlington for his arraignment on charges pertaining to the EB-5 fraud case on Wednesday.

An hour prior, Stenger, Jay Peak’s former president and CEO, had stood in the same courtroom, at the same defense table, pleading not guilty to similar federal charges. He, too, was released after posting a $100,000 appearance bond. Stenger is also barred from traveling out of the country and was required to surrender his passport to authorities.

Brooks McArthur, Stenger’s attorney, blamed Quiros for orchestrating the fraud scheme and said his client had been left in the dark.

Quiros was seated at the defense table in the courtroom with an attorney of each side. On one side was Levine, on the other side was Robert Katims of the Burlington-based firm Hoff Curtis.

Katims appeared at the arraignment at the federal court as a jury in state court only blocks away was deliberating in the murder case against another of his clients, Steven Bourgoin.

The jury in that state case later in the afternoon returned a verdict convicting Bourgoin of five counts of second-degree murder in a wrong-way crash that killed five central Vermont teenagers.

Also part of the legal team for Quiros is Visconti, a Florida-based attorney and former federal prosecutor who has been representing him for more than two years in the civil investor fraud cases.