Driving Foreign Investment In Northeast Ohio: What’s Next For EB-5? 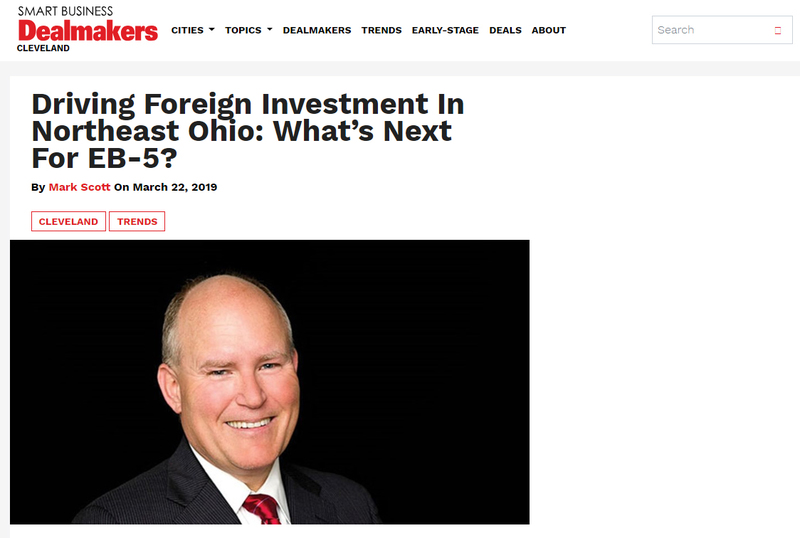 Foreign investors have funded numerous high-profile real estate projects across the Cleveland area, including the Uptown Expansion, the creation of the Westin Hotel downtown and development at the Flats East Bank. But the program that brought more than $250 million to Northeast Ohio to finance these and other projects faces an uncertain future, says Stephen Strnisha, CEO at The Cleveland International Fund, a Regional Center for the EB-5 program.

A win for both sides

The EB-5 program is an immigrant investor program that provides a way for qualified foreign nationals to receive a permanent U.S. green card if they make a $500,000 investment in a qualified, job-creating project.

“If you invest in a project and it creates the required number of jobs, you and your immediate family will have permanent residency, not subject to renewal, not subject to a lottery,” Strnisha says. “They are not traditionally looking for a market rate of return. The return is primarily getting a green card. That’s what drives EB-5 investment.”

The program was created in 1992, but really took off at the height of the 2008 financial meltdown.

“In the midst of the credit crisis from 2008 to 2010, we were doing more first mortgage financing and senior construction lending, because even in that space it was limited as to which banks were participating,” Strnisha says. “As the market has gotten better, it’s more likely that we do mezzanine financing.”

The loan process begins with identifying a new development project and determining how many jobs it should create. Typically, the EB-5 contribution is anywhere from 10 to 20 percent of the capital stack associated with the project, Strnisha says.

It’s not an easy process.

“I joke sometimes with people who come to us and talk to us that if you have an easier source for the piece of the capital stack that you’re looking for, you ought to go get it,” Strnisha says. “Because EB-5 is not the easiest way to get the money. We have to identify the project, raise the money and deploy it. But the reason we have been effective and very critical to certain projects happening or not happening is we provide a source of capital on terms that others would not.”

As an EB-5 Regional Center, CIF has built strong relationships with commercial and real estate developers throughout Northeast Ohio. To date, projects receiving CIF loans represent $2.4 billion in total investment and have created more than 17,000 jobs in the region.

The way CIF operates has shifted recently in response to the health of the economy and ongoing concern about immigration and border security. Instead of targeting new investors, Strnisha and his team are focused on creating repeat investors.

“We’ve raised over $250 million and we have repaid $100 million to date to investors,” Strnisha says. “We have other loans scheduled to be repaid this year. We’re now going back to these investors with the pitch that ‘We’ve been good to you and Cleveland has been good to you. You’ve gotten your green card; you’ve gotten repaid and you now have your capital over here. Would you be interested in looking at a market rate investment in our same service area? We can get you a rate of return that’s not dictated by residency since you have that already. But it’s a good solid investment.’”

EB-5 has traditionally enjoyed bipartisan support as an initiative that creates jobs across the country. However, since 2015, it has continued on short-term authorization from Congress. The most recent approval came last month, when the program was allowed to continue through Sept. 30, 2019.

Strnisha acknowledges that there’s room for improvement. But he says he and his colleagues are willing to do what it takes to make EB-5 better. For now, he’ll work with the cards he’s been dealt.

“I’m very realistic on where we are right now,” he says. “I get accused of being both very pessimistic and very optimistic. I don’t see anything changing with the current state of EB-5 in the near-term, but I do think things will come around. There has been a lot of good done with this. We’ve run the program the right way and we’ll go to these folks and hopefully have fruitful conversations to get them to reinvest with us.

“I wish we could do big $45 million offers like we did for Flats Phase One. But in the meantime, there are things we can do and that’s what we’ll take advantage of.”