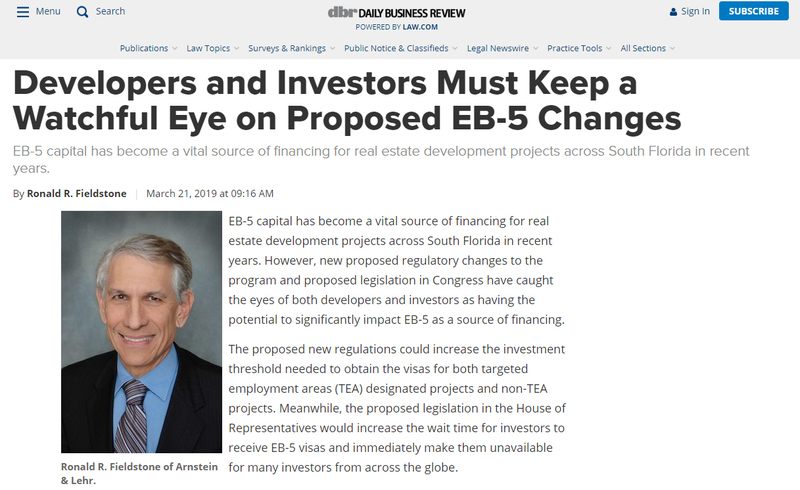 EB-5 capital has become a vital source of financing for real estate development projects across South Florida in recent years.

EB-5 capital has become a vital source of financing for real estate development projects across South Florida in recent years. However, new proposed regulatory changes to the program and proposed legislation in Congress have caught the eyes of both developers and investors as having the potential to significantly impact EB-5 as a source of financing.

The proposed new regulations could increase the investment threshold needed to obtain the visas for both targeted employment areas (TEA) designated projects and non-TEA projects. Meanwhile, the proposed legislation in the House of Representatives would increase the wait time for investors to receive EB-5 visas and immediately make them unavailable for many investors from across the globe.

Recently, the U.S. Citizenship and Immigration Service (USCIS) sent new regulations related to the EB-5 program to the Office of Management Budget for approval. Currently, the proposed rule would raise the minimum investment amount to qualify for the visa to at least $1.35 million and would curtail locations that could qualify as a targeted employment area. While this is an initial proposal, the rules must still be sent to the General Accounting Office and be subject to administrative approval. As such, it is difficult to predict what the net result of the regulations will be, including what the final increase in the investment amounts for both non-TEA and TEA designated projects will be, and the potential for phasing, if any, of the investment amount increases.

In addition to the proposed USCIS regulation, the U.S. House of Representatives introduced the Fairness for High-Skilled Immigrants Act of 2019. The proposed act would eliminate the per-country limitation on employment-based immigrants and changes the per-country limitation on family-based immigrants from 7 percent to 15 percent. If passed, the amendments would take effect on Sept. 30, 2019, and apply beginning with the 2020 fiscal year.

The act’s transitional rules for employment-based immigrants would be as follows. Beginning in fiscal year 2020, 15-percent of EB-2, EB-3, and EB-5 visas shall be allotted to individuals who are natives of countries other than the two countries with the largest aggregate numbers of natives who are beneficiaries of approved petitions for immigrant status. That number drops to 10 percent for fiscal year 2021 and 2022. Further, the number of visas reserved that are allocated to any single foreign state or dependent area in the appropriate fiscal year may not exceed 25 percent (in the case of a single country) or 2 percent (in the case of a dependent area) of the total number of visas available.

Additionally, no more than 85 percent of the EB-2, EB-3 and EB-5 visas made available would be allotted to immigrants who are natives of any single foreign country.

Net Result of the Act

Under this act, removing the per-country cap would make the EB-5 visa immediately unavailable for all existing EB-5 investors from the countries that are not currently experiencing the visa retrogression issue—including Brazil, South Korea and the rest of the world (except for China and Vietnam). Hypothetically, in the first five years of the elimination of the per-country cap, it is forecasted by Invest in the USA (IIUSA) that over 96 percent of the annual EB-5 visa allocation would be used by the existing Chinese EB-5 visa applicants and their qualified family members while the remaining 4 percent would be consumed by the existing EB-5 visa applicants and their family derivatives from Vietnam.

A longer waiting period to receive permanent residency for investors along with the investment amounts required potentially increasing, could severely impact EB-5 as an attractive source of financing for developers. Both developers and investors need to keep a watchful eye on these new regulation and proposed legislation as they move through the approval process.