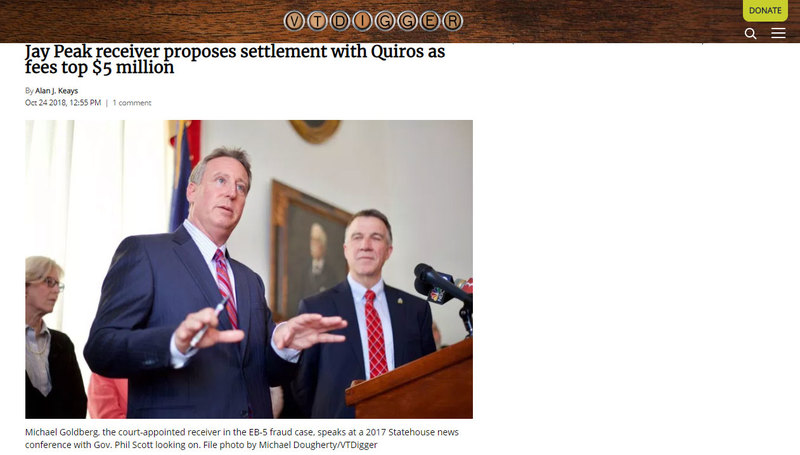 Michael Goldberg, the court-appointed receiver in the EB-5 fraud case, speaks at a 2017 Statehouse news conference with Gov. Phil Scott looking on.

Michael Goldberg is seeking more than $1 million in his latest filing for fees for overseeing the Northeast Kingdom properties at the center of the EB-5 investor fraud scandal and cleaning up the financial mess that was left behind.

The fee request comes as Goldberg, a court-appointed receiver, has filed a proposed settlement of his lawsuit against Jay Peak’s former owner Ariel Quiros.

The receiver says in court records that resolution is an “important step” in clearing the way for him to start selling off assets that Quiros had owned in Vermont, including Jay Peak as well as Burke Mountain ski area. It also would help defrauded EB-5 investors recoup some of their losses.

Quiros, the resort’s former owner, and Bill Stenger, the former CEO, misused $200 million of investor funds raised through the EB-5 program to pay for massive upgrades at Jay Peak and additional projects in other communities in northern Vermont, according to regulators.

The Securities and Exchange Commission brought the fraud to a halt in April 2016 with the filing of a 52-count securities fraud lawsuit against the developers.

Both the fee request from Goldberg and the proposed settlement with Quiros still need the approval of federal Judge Darrin P. Gayles, who is presiding in that SEC case.

As soon as the SEC filed that lawsuit in April 2016, Goldberg was appointed by Gayles to serve as the receiver and oversee assets belonging to Quiros that regulators say were at the heart of the investor fraud allegations against him.

In the latest request for attorney and professional fees, Goldberg wrote that his $1,052,425 request represents “a $614,000 discount in fees from the professionals’ standard billing rates.”

He also is seeking reimbursement for $40,935 in expenses for those attorneys and other professionals, for a total payment of $1,132,945 to the receiver and his professionals.

Goldberg wrote in the filing that the amount of the “non-restricted cash” in the receivership bank accounts totals about $7 million.

“The Receiver seeks to use the non-restricted funds to satisfy the accrued administrative fees and expenses of $1,132,545.94,” he wrote.

Those unrestricted funds, Goldberg wrote, are from the proceeds of settlements in the case and other asset sales.

Goldberg wrote in the filing that he and his firm, Akerman LLP of Fort Lauderdale, Florida, as well as the other professionals working with him, have reduced their standard rates.

For example at Akerman, he wrote, instead of the standard rates ranging from $440 to $725 an hour, all partners are billed at $395 an hour; associate rates are capped at $260.

For the time covered by the latest request, Goldberg and his firm are seeking $630,709 in fees and expenses, according to the filing.

A breakdown of the fees and expenses for the other professionals from Feb. 1 to Aug. 31 shows:

• Kapila Mukamal, an accounting firm based in Florida, seeks fees and expenses totaling $221,497.

• Klasko Immigration Law Partners LLP, of Pennsylvania, which has worked for the receivership in assisting with EB-5 immigration matters, is seeking payment of $$38,723.

While Quiros agreed earlier this year to surrender $81 million in assets, including the two ski resorts, to resolve the SEC case, entities he still owned had a stake in the properties.

As a result of the proposed settlement filed in court this week with the receiver, Quiros is waiving any rights in the entities that have those rights.

“This was an important step because it enables me to distribute the sales proceeds to the victims shortly after the sale rather than engage in protracted litigation with Mr. Quiros over entitlement to the proceeds,” Goldberg said in an email Tuesday.

“It will also save the estate hundreds of thousands of dollars in legal fees in obtaining a judgment that might not be very collectible,” he added. “I think the settlement is in the best interest of the victims.” 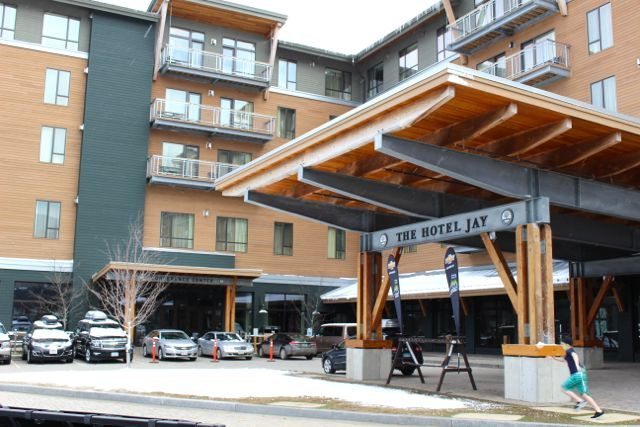 The Hotel Jay is the signature project of the Jay Peak Resort expansion, where developers used EB-5 immigrant investor money to build the five-story structure.

Goldberg is hoping to sell Jay Peak by next summer while the sale of Burke Mountain is indefinitely on hold as the receiver works to boost job-creation at that resort, a key factor on whether EB-5 investors can obtain green cards.

In May 2016, Goldberg, in the role of receiver, sued Quiros and Raymond James & Associates.

The lawsuit alleged the financial services company and Joel Burstein, a former employee who used to be the son-in-law of Quiros, of helping Quiros come up with the scheme to commingle and “steal investors’ funds for his own use in breach of partnership agreements.”

As the receiver, Goldberg’s primary responsibility is to protect the interests of the investors. Also, he has the authority to act as the owner of the properties, to investigate how Quiros conducted business, and to take legal action to recoup funds and assets that were “wrongfully misappropriated.”

More than a year ago, Goldberg reached a settlement with Raymond James for $150 million, with the financial services company neither admitting nor denying wrongdoing.

That settlement with Raymond James included a bar order, providing protection for Raymond James against future claims from the receiver and from investors in the EB-5 funded projects.

In the proposed settlement with Quiros, Goldberg has agreed to do his best to seek a similar bar order for the Miami businessman.

Any objection to the proposed settlement must be filed at the federal court in Miami where the case is pending. The case is taking place in Miami because that is where Quiros lives and many of his businesses are located.