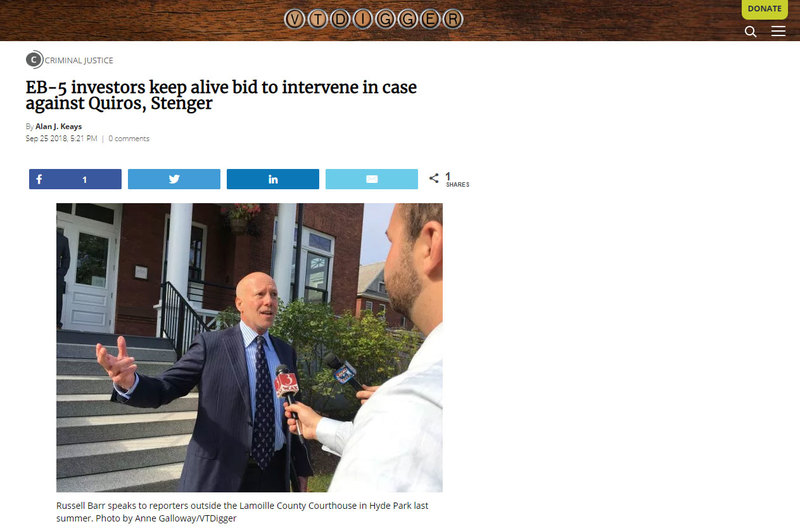 The Vermont Supreme Court is allowing an attorney for a group of EB-5 investors to continue in his bid to jump into a fraud case against two Jay Peak developers that the state is seeking to settle with for more than $2 million.

That’s the latest twist in the long-running legal tussle between the state of Vermont and attorney Russell Barr, of the Stowe-based Barr Law Group, who represents that group of EB-5 investors.

Barr filed a motion in May in Washington County Superior civil court to intervene in a lawsuit brought by the state more than two years ago against Jay Peak’s former owner Ariel Quiros and his past business partner Bill Stenger, who had been the resort’s CEO and president.

The Stowe attorney has contended that he is in better position than the state to represent the investors who say they were defrauded by the two developers.

Barr submitted the filing shortly before the state announced a $2.1 million settlement with Quiros and Stenger, with Quiros paying the bulk of that amount, $2 million, by agreeing to turn over several properties to the state.

Stenger will pay $100,000 over four years, with the money going to the Agency of Commerce and Community Development to fund economic development initiatives in Newport, a Northeast Kingdom community home to two failed projects headed by Quiros and Stenger.

The state has objected to Barr’s quest to intervene in its lawsuit against Stenger and Quiros, and in July, Judge Mary Miles Teachout, who is presiding over the state’s case against the two developers in Washington County, agreed, denying Barr’s intervention bid.

That prompted Barr to appeal that ruling to the Vermont Supreme Court, and again the state objected, asking the high court to dismiss Barr’s challenge.

The state’s highest court, in an order dated Monday, denied the state’s request to throw out Barr’s appeal.

“The State’s motion to dismiss this appeal is denied,” the one-page order stated. “Appellants have a right to appeal from the trial court’s denial of their motion to intervene.”

Now, the Supreme Court will decide the appeal on its merits following oral arguments, which have not yet been set.

Barr has been embroiled in litigation with the state regarding the EB-5 funded projects at the center of the investment scandal, as well as the state’s role in it.

Barr filed a lawsuit more than a year ago in Lamoille County Superior civil court in Vermont on behalf of a handful of investors.

Those investors, including Tony Sutton of London, brought claims against current and past state officials and employees as well as government agencies, claiming they were complicit in the alleged fraud carried out over an eight-year period by the two Jay Peak developers.

In that case, Judge Thomas Carlson granted a motion earlier this year filed by the Vermont attorney general’s office to dismiss the case, citing the state’s absolute immunity from third party civil claims.

Barr has since appealed that ruling to Vermont Supreme Court, where it remains pending.

However, at the same time, the Stowe attorney submitted his filing to intervene in the state’s lawsuit against Quiros and Stenger, contending that he wants to make sure that the investors interests are “adequately” represented.

“I consider it a win,” Barr said Tuesday of the high court allowing him to press forward with his appeal, adding, “We just want the money to be paid to the investors. Not one penny should wind up in the ACCD.”

The state alleged in its lawsuit filed in April 2016 against Quiros and Stenger that the two men misused $200 million in EB-5 investment funds, money through the federal immigrant investor program to fund a series of development projects over an eight-year span.

Those projects included massive upgrades at Jay Peak, a new hotel at Burke Mountain, and two projects that never got off the ground in Newport.

The developments ground to halt when that lawsuit and another brought by the U.S. Securities and Exchange Commission were brought alleging a “Ponzi-like” scheme operating behind the scenes with the investor funds.

Both Quiros and Stenger have reached settlements of that federal SEC case, with Quiros agreeing to surrender more than $80 million in property, including Jay Peak, to the federal government. Stenger agreed to a $75,000 penalty.

In a filing contesting Barr’s bid to intervene in the state’s lawsuit with Quiros and Stenger, Assistant Attorney General Kate Gallagher, who is representing the state, wrote that the Stowe attorney failed to follow the proper procedure.

That process, including in part, asking Judge Teachout for permission to appeal her earlier ruling within a 14-day window.

“Here, it is clear that the denial of the motion to intervene was not intended to be, and was not, a final order,” Gallagher wrote. “The trial court has continued to exercise jurisdiction after the entry of the order and retains jurisdiction now at the parties work towards a final resolution of the case.”

Gallagher added, “Because the Proposed Intervenors failed to timely seek permission to appeal from the July 7 Order, and are not entitled to appeal as of right, this appeal should be denied.”

Gallagher could not immediately be reached Tuesday for comment.