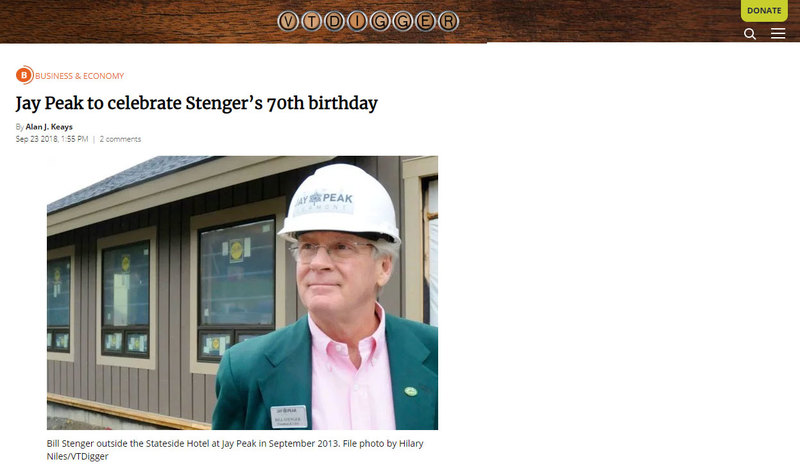 Bill Stenger outside the Stateside Hotel at Jay Peak in September 2013.

William Stenger says he doesn’t know about it, but the Jay Peak Resort that regulators say he helped plunge into near-financial collapse in a massive investor fraud scandal will be the site of a party in his honor this week.

A glittery mailed invitation announces Stenger’s 70th birthday bash set for Thursday under the resort’s clubhouse tent with a quote from William Shakespeare’s play Much Ado About Nothing: “There was a star that danced, and under that was I born.”

The event will run from 5 p.m. to 8 p.m.. Dinner, wine and beer will be served at the party, which will feature a cash bar. Guests had to RSVP by last week by sending an email to HR@jaypeakresort.com.

“I have no idea what you’re talking about,” he said in response to questions about the party.

He then hung up the phone.

Steven Wright, Jay Peak’s general manager, said Friday that the resort is not paying for the party.

“It’s a private gathering,” he said, adding he would have to do more research before saying who exactly is footing the bill for the event.

He also didn’t know how many people were expected to attend.

Michael Goldberg, a court-appointed receiver now overseeing Jay Peak and other related properties in northern Vermont at the center of the EB-5 investor fraud scandal, said later Friday that the resort isn’t paying for Stenger’s birthday party at the resort.

“This is something a few of the employees are doing,” Goldberg said. “Jay Peak is not paying for it, it’s not even in our budget.”

Pressed about who would be paying for the party, the receiver responded, “Steve is personally paying.”

Asked if the use of the Jay Peak site represented a cost to the resort, the receiver responded, “It doesn’t cost us anything to let them have a party on Jay Peak lands.”

Stenger has remained a presence at both Jay Peak and Burke Mountain ski resorts, despite separate lawsuits brought in April 2016 by state and federal regulators accusing him and his business partner, Ariel Quiros, of 52 counts of investor fraud.

Quiros and Stenger, regulators allege in filings, misused $200 million of $350 million they raised through the federal EB-5 program. Stenger, the former president of Jay Peak and front man who handled investor relations, had deep connections with key state politicians, including Sen. Patrick Leahy, D-Vt., and former Gov. Peter Shumlin. In 2011, he was named the Vermont Chamber of Commerce’s Citizen of the Year for creating an economic engine at Jay Peak that brought hundreds of jobs to the impoverished region of the Northeast Kingdom.

The Securities and Exchange Commission alleges that more than 800 foreign investors seeking green cards through the immigrant investment program were bilked by the developers through a “Ponzi-like” scheme.

The projects include many making massive upgrades to Jay Peak resort, from hotels and condos to a waterpark and ice rink.

Quiros, regulators claim, siphoned off more than $50 million for himself, using those funds for personal expenses. He used money from investors to buy the Jay Peak Resort, Burke Mountain and two luxury condos in New York City.

The Miami businessman owned Jay Peak, and Stenger was the resort’s president. Quiros has since reached a settlement with the U.S. Securities and Exchange Commission, agreeing to surrender $81 million in assets to the federal government, including both Burke Mountain and Jay Peak ski resorts.

Stenger has also settled with the SEC, agreeing to pay a $75,000 penalty.

In the settlements, neither Stenger nor Quiros admitted or denied wrongdoing.

Also, earlier this year, the state entered into agreements with Stenger and Quiros to resolve its case against the two developers.

Quiros agreed to turn over to the state five properties the state values at $2 million. Stenger will pay $100,000 over the course of four years to the state Agency of Commerce and Community Development for economic development purposes in Newport.

That Northeast Kingdom community is home is to two failed projects headed by Quiros and Stenger, including one that stalled after a downtown building was razed, leaving a large hole in the community’s downtown.

Goldberg said Friday that Stenger continues to work for him on a consulting basis at a rate of about $50 an hour, for about 20 hour a week. He’s also allowed use of a vehicle belonging to the resort. In 2016 and 2017, Stenger continued to make about $100,000 per year as he cooperated with federal regulators. In addition, he was able to use a Jay Peak vehicle and continued to benefit from other perquisites.

The receiver had previously said Quiros, the mastermind of the alleged investor fraud scheme, had “duped” Stenger.

Goldberg said Friday that Stenger spends much of his work time at the Burke Mountain resort. “He’s been of great assistance to me,” the receiver said.

“I wasn’t invited and I won’t be there,” the receiver said, before adding, “but I have no problem with it.”

The event set for Thursday comes six years after another memorable birthday Stenger marked in 2012.

That’s when he celebrated his 64th birthday by announcing $500 million in projects claiming would bring 10,000 jobs to northern Vermont over 60 months. The massive Northeast Kingdom Development Initiative was announced as an additional series of projects — on top of the $250 million in developments already undertaken at Jay Peak Resort. The initiative included an expansion of the trail system at Jay Peak, a $180 million expansion at Burke Mountain, an expansion of the Coventry airport, a window manufacturing plant, and a biomedical facility, office and retail space and a marina and conference center in Newport.

Joining Stenger at the announcement event in Newport that day were then-Gov. Peter Shumlin and all three members of the Vermont’s congressional delegation — Sens. Patrick Leahy, D-Vt., and Bernie Sanders, I-Vt., and Rep. Peter Welch, D-Vt.

Much of the initiative failed to get off the ground and eventually was halted by the lawsuits state and federal regulators filed in April 2016.

A centerpiece of that development plan, AnC Bio Vermont, a $110 million proposed biomedical research center in Newport, was later deemed by the SEC “nearly a complete fraud.”

A criminal probe by federal prosecutors is ongoing.

At the time of the $500 million development announcement in 2012, Leahy was a booster for the projects. When the SEC charges were brought in April 2016, he said he felt “betrayed” by Stenger.

Besides, Carle added of the celebration marking Stenger’s 70th birthday, the senator never received an invitation.