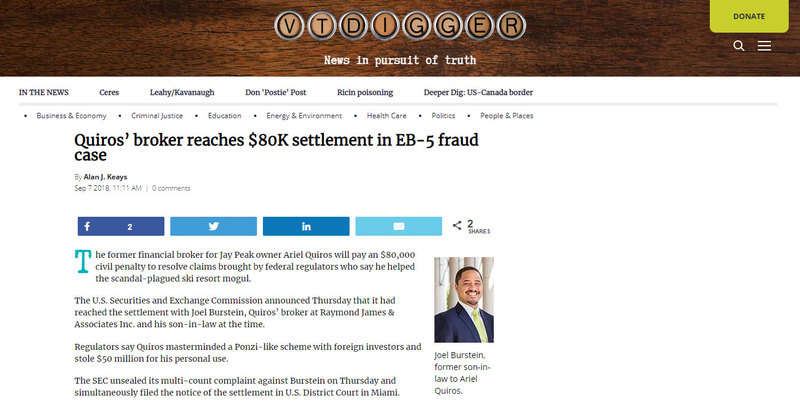 The U.S. Securities and Exchange Commission announced Thursday that it had reached the settlement with Joel Burstein, Quiros’ broker at Raymond James & Associates Inc. and his son-in-law at the time.

Regulators say Quiros masterminded a Ponzi-like scheme with foreign investors and stole $50 million for his personal use.

The SEC unsealed its multi-count complaint against Burstein on Thursday and simultaneously filed the notice of the settlement in U.S. District Court in Miami.

That’s also the court where the SEC brought its investor fraud case against Quiros, a Miami businessman, which he settled earlier this year by agreeing to surrender $81 million in assets, including his interest in Jay Peak and nearby Burke Mountain ski resort.

“Burstein substantially assisted in the fraud from its inception,” federal regulators stated in their court filings unsealed Thursday.

“Burstein facilitated Quiros’ misappropriation of more than $21 million of investor funds to acquire the Jay Peak ski resort,” according to the SEC.

“Burstein then assisted Quiros in trying to mask the significant shortfall created in the Raymond James brokerage accounts from the misappropriation,” the SEC added.

According to the agreement, Burstein is neither admitting or denying the allegations.

In addition to paying the $80,000 penalty, the agreement with the SEC calls for Burstein to be barred from working as a “broker, dealer, investment adviser, municipal securities dealer, transfer agent, or nationally recognized statistical rating organization, and from participating in an offering of penny stock, with the right to apply for reentry after 10 years.”

Burstein, 38, who previously resided in Miami, Florida, now lives in Pittsburgh, Pennsylvania, according to court records. He is no longer married to Quiros’ daughter.

He worked for Raymond James from April 2001 until he was terminated in December 2016 because of conduct relating to the Jay Peak fraud, court records stated.

His settlement with the SEC follows a separate settlement Raymond James reached last year with Michael Goldberg, a court-appointed receiver now overseeing Quiros’ assets at the center of the fraud case, including both Jay Peak and Burke Mountain ski resorts.

In that settlement, Raymond James agreed to pay the receivership $150 million to resolve claims Goldberg made in a lawsuit brought against the financial institution alleging it “aided and abetted” the fraud carried out by Quiros.

In that settlement, Raymond James also neither admitted nor denied the allegations.

According to court filings, Quiros and his former business partner William Stenger, Jay Peak’s former president and CEO, misused $200 million of the more than $350 million they raised from foreign EB-5 investors who each put up $500,000, and in return, were seeking green cards.

However, the SEC and state regulators, in lawsuits brought in April 2016 brought a halt to the projects headed by the two developers which spanned nearly a decade.

The money raised by the two developers from the EB-5 program was meant to finance projects from massive upgrades at Jay Peak to a proposed $110 million biomedical research facility in Newport that never got off the ground.

The SEC termed the financial operation a “Ponzi-like” scheme, and said Quiros alone siphoned off $50 million, using the funds to pay personal expenses, including the purchase of a luxury condo on Fifth Avenue in New York City.

According to court filings, the financial services company Raymond James and Burstein aided Quiros in developing a scheme to commingle and “steal investors’ funds for his own use in breach of partnership agreements.”

And the scheme started when Quiros purchased Jay Peak in June 2008 by improperly using EB-5 investor funds meant for other redevelopment projects at the resort, court records stated.

In total, with Burstein’s assistance, Quiros misappropriated more than $21 million of Phase I (Tram Haus) and Phase II (Hotel Jay) investor funds to purchase Jay Peak,” the SEC complaint stated, later adding. “Even after the Jay Peak acquisition, Burstein continued to facilitate the fraud by assisting Quiros in masking his misappropriation of investor funds.”

Stenger has also since reached a settlement with the SEC in his case brought by the federal regulators, agreeing to pay a $75,000 penalty, which is $5,000 less than the $80,000 Burstein will be paying.

When the SEC lawsuit was announced in April 2016 against Stenger and Quiros, federal prosecutors in Vermont said they were conducting a probe into the matter. However, they have been tight-lipped ever since, neither confirming nor denying such a probe is underway.

However, state officials, including Gov. Phil Scott and Vermont Attorney General TJ Donovan have said such a probe by federal authorities is ongoing.