How Transparent Are EB-5 Project Managers? 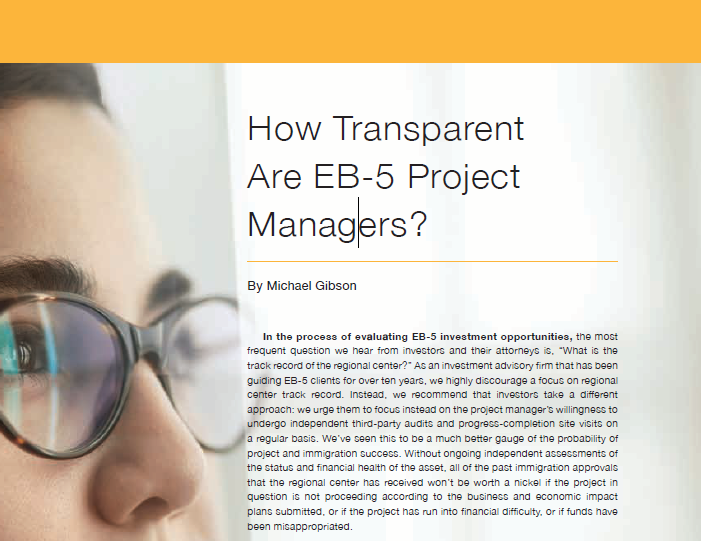 In the process of evaluating EB-5 investment opportunities, the most frequent question we hear from investors and their attorneys is, “What is the track record of the regional center?” As an investment advisory firm that has been guiding EB-5 clients for over ten years, we highly discourage a focus on regional center track record. Instead, we recommend that investors take a different approach: we urge them to focus instead on the project manager’s willingness to undergo independent third-party audits and progress-completion site visits on a regular basis. We’ve seen this to be a much better gauge of the probability of project and immigration success. Without ongoing independent assessments of the status and financial health of the asset, all of the past immigration approvals that the regional center has received won’t be worth a nickel if the project in question is not proceeding according to the business and economic impact plans submitted, or if the project has run into financial difficulty, or if funds have been misappropriated.

It is crucial that the firm performing this ongoing due diligence be independent, and that access to the reports be given to the investors directly— otherwise, project management could withhold the adverse findings. Statements from the project manager or regional center alone regarding the health of the asset should be viewed with caution, as we have seen a number of cases involving fraud and misrepresentation from project managers and centers in the past. In such instances, the investments appeared to be on track, but were in fact not as healthy as claimed.

Data released from USCIS confirms that some of the regional centers with the highest numbers of approvals (both I-526 and I-829) have also been the subjects of investor litigation claiming fraud and actions by regulatory agencies. Some of these same centers have been in the news for sponsoring projects that are facing significant delays and financial difficulties. The most glaring common denominator in these cases is that no warning was given to investors or their attorneys about the problems associated with their projects until long after the adverse impacts were discovered and should have been reported. Of course, a visit to their websites and review of their marketing materials handed out at EB-5 onferences will turn up no mention of these issues.

Relying on project managers to be forthcoming with these adverse disclosures has been problematic. Even after news of the adverse events has come out, managers have been reluctant to describe in any detail the nature of the events and their potential impact on the EB-5 investors, since they do not want any negative news to harm current or future capital raises.

In most cases, the investors first come to learn of the issue through news reports, as neither they, nor their immigration attorneys, have been to the site or have inspected the financial records, construction draws or project completion milestones. Instead, they have relied solely on the manager’s assurances, and the news often comes as a shock.

This appears to be the case in a number of EB-5 projects recently in the news — including Jay
Peak, California Investment Immigration Fund, and Path America, just to name a few. Several have involved extensive delays, large cost overruns, financial insolvency, bankruptcy, creditor interventions and work stoppages. In none of these cases does it appear that investors or their attorneys were informed of the problems ahead of their public announcement. Several of these projects are sponsored by very well-known centers who have a large number of immigration approvals, yet despite this extensive “track record,” it appears as though investors in these offerings may be subjected to a denial of residency as well as a loss of the capital invested.

There are clear standards imposed on investment advisors, broker-dealers and attorneys regarding disclosure of material facts and fraud by omission, but there are none on regional center operators. This is why it is imperative that before any investment decision be made, investors and their attorneys ensure that one of the above is responsible for auditing and reporting to investors, on a regular basis, the status of the development and operation of the asset. Otherwise, they may discover that the project they’ve invested in won’t deliver on the promises made. In terms of qualifications and experience, an investment adviser would be the person best equipped to perform this ongoing due diligence on the project. In recent years, our firm has been selected by project managers to perform this ongoing independent due diligence on a number of different projects.

We believe that as USCIS steps up its site inspections and audits of EB-5 projects, more actions to deny petitions and terminate regional centers will occur as inspectors discover that the investments do not meet the requisite agency standards, thereby increasing the likelihood of investor actions against the project managers…but by then, it may be too late to salvage their investment. Our recommendation is that investors select only projects in which there are independent third parties in place to facilitate the dissemination of all relevant project and financial information — otherwise, they are beholden to managers who may not have their best interests in mind. Our website, EB5projects.com, lists all projects and clearly indicates those that will protect the investors with ongoing independent due diligence. Make the smart choice with the help of a qualified investment adviser.