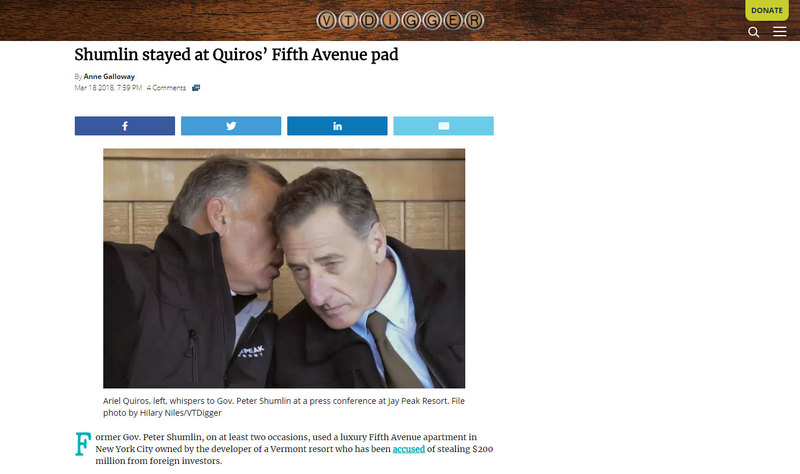 Former Gov. Peter Shumlin, on at least two occasions, used a luxury Fifth Avenue apartment in New York City owned by the developer of a Vermont resort who has been accused of stealing $200 million from foreign investors.

Shumlin stayed at the so-called Setai condo owned by Jay Peak developer Ariel Quiros for several days in May 2013, and for five days in June 2014, according to a source with knowledge of the governor’s schedule.

The governor invited his girlfriend, Kathleen Hunt, along for the June 1-5, 2014, stay and also held business meetings at the luxury apartment during that period. Shumlin, who was divorced at the time, married Hunt in 2016.

The 60-story luxury hotel and condo complex located near the Empire State Building in midtown Manhattan was designed by the famous architectural firm Gwathmey Siegel and Associates. Hotel rooms in the complex, now known as The Residences at 400 Fifth Avenue, run about $450 per night. Apartments are renting for about $7,500 a month, according to a company website.

Shumlin did not pay for his stays at the apartment. The former governor did not respond to requests for an interview.

Gordon Witkin, executive director of the Center for Public Integrity, said that the EB-5 program seems to have been “a magnet for shady dealings” and probably “it was a bad idea” for Shumlin to stay at Quiros’ condo.

“But what’s legally ethical and unethical in this regard has been significantly clouded by the U.S. Supreme Court’s decision in the McDonnell case in Virginia, which seemed to move the needle as to what is indeed unethical and what represents a quid pro quo favor for a constituent or business interest doing business in the state and what is within a reasonable parameter of what a governor should be doing to promote business in that state,” Witkin said in an interview.

Quiros bought the luxury condo for $3.8 million with “ill-gotten gains” stolen from EB-5 immigrant investors over an eight-year period, according to the Securities and Exchange Commission. Federal regulators settled with Quiros last month, and the SEC is now in the process of selling more than a dozen properties bought with money from defrauded investors, including the Jay Peak Resort and Burke Mountain Resort. The Setai condo is one of the assets that will be sold to repay investors.

The free stays at the Setai condo are another indication of Shumlin’s close ties to the Jay Peak developers. The former governor also received more than $20,000 in campaign contributions from Quiros, then Jay Peak CEO and President Bill Stenger and associates.

During Shumlin’s tenure, Quiros and Stenger ramped up developments in the Northeast Kingdom and pursued hundreds of millions of dollars in EB-5 monies from foreign investors, ultimately ensnaring more than 800 investors in what the SEC described as a Ponzi-like scheme.

It was also under Shumlin’s watch that officials with the state-run Vermont EB-5 Regional Center, who were responsible for overseeing the Jay Peak projects, failed to investigate early warning signs of fraud and later, under pressure from the former governor, allowed two of the projects to continue after questions were raised about financial improprieties.

Douglas Hulme, a business partner of Quiros and Stenger, abruptly halted his relationship with the developers in February 2012 because he said he “no longer had faith” in the financials at Jay Peak. The director of the state regional center conducted a cursory one-day review of the finances and declared that the books were in order. Shortly afterward, state officials forced out Hulme, who was also involved in the EB-5 project at Mount Snow in Dover. A state audit of the finances at Jay Peak was never conducted.

In 2012, the state approved a proposal that allowed the developers to sell the fifth floor of the Hotel Jay to a second set of investors, state documents show. An additional $32.5 million from EB-5 investors was used to pay off cost overruns at the Jay Peak water park. It is not known what else the money was used for as the Vermont Department of Financial Regulation has not investigated the double sale of the fifth floor of Hotel Jay.

Meanwhile, Shumlin actively promoted the Jay Peak projects. He solicited investors on behalf of the developers in Miami in 2011. The governor was present, along with Vermont’s congressional delegation, for a daylong press conference in which Stenger celebrated $200 million worth of developments at Jay Peak and announced a plan to solicit hundreds of million of dollars more in additional EB-5 immigrant investor funds for a biomedical facility, a $180 million athletic center at Burke Mountain Resort, an office building, a window manufacturing plant, and a marina and a conference center in Newport.

After he was re-elected in 2012, Shumlin’s campaign manager and deputy chief of staff, Alex MacLean, went to work for Stenger in January 2013 as a communications, project and investor relations manager at Jay Peak.

In September 2013, Shumlin went on a $100,000 promotional junket for Jay Peak in China and Vietnam with MacLean, commerce agency secretary Lawrence Miller and others. The trip was paid for by Stenger and Quiros. A month later, the governor appeared in a promotional video, translated into Chinese, in which he claimed the projects at Jay Peak were audited by the state. Shumlin later (after the SEC brought 52 counts of securities fraud against the developers in 2016) said he misspoke.

Just a few weeks before Shumlin stayed at the Setai condo in June of 2014, the SEC had taken depositions of the Jay Peak developers. In May 2014, investors in the Tram Haus Lodge at Jay Peak emailed complaints about financial problems at the resort and Stenger’s abuse of power to Brent Raymond, the director of the Vermont EB-5 Regional Center. Raymond aggressively rebuffed investors who claimed that the Jay Peak developers had seized ownership of the hotel from investors.

That same month, however, internal memos show Raymond was concerned about another problem on the horizon — the default of a biomedical company in South Korea that was tied to AnC Bio Vermont, a proposed stem cell research and artificial organ manufacturing facility in Newport. Raymond was so disturbed by what he found that he suspended two of Quiros and Stenger’s projects — Burke Mountain and AnC Bio Vermont.

Later that summer, after reports detailed the Tram Haus complaints, Raymond and his boss, Pat Moulton, secretary of the commerce agency, accused VTDigger of publishing “inaccurate” reporting. Meanwhile, Shumlin issued a memo asking the Department of Financial Regulation to conduct a review of the EB-5 program. DFR and the commerce agency agreed to the review in January 2015.

But in the end, Shumlin intervened. In March 2015, the same month that DFR began a full-blown investigation of the developers in tandem with the SEC, Shumlin put pressure on state regulators to allow Stenger and Quiros to reinstate the Burke Mountain and AnC Bio Vermont projects.

That action enabled the developers to solicit more investors for the projects until April 12, 2016, right up until federal and state regulators filed charges.

The U.S. Citizenship and Immigration Service found that the state did not properly oversee the Jay Peak projects and allowed the fraud to continue over an eight-year period. Last year, USCIS issued a notice of termination to the Vermont EB-5 Regional Center. DFR has said it will fight termination of the center; the Scott administration has said it will wind down EB-5 projects over time.

The Vermont Attorney General’s Office and the Vermont Department of Financial Regulation have sued Quiros and Stenger separately from the SEC and have used the relevant litigation exemption to block release of records in the case.

Shumlin did not run for re-election in 2016. His successor, Gov. Phil Scott, has said 1.5 million pages of state documents in the EB-5 case would be released as part of the court proceedings.

His public statements, however, do not comport with reality: The Vermont Attorney General’s Office and the Vermont Department of Financial Regulation have asked for the records to be sealed and there is no mechanism for journalists to file for a motion to intervene for the release of the documents.