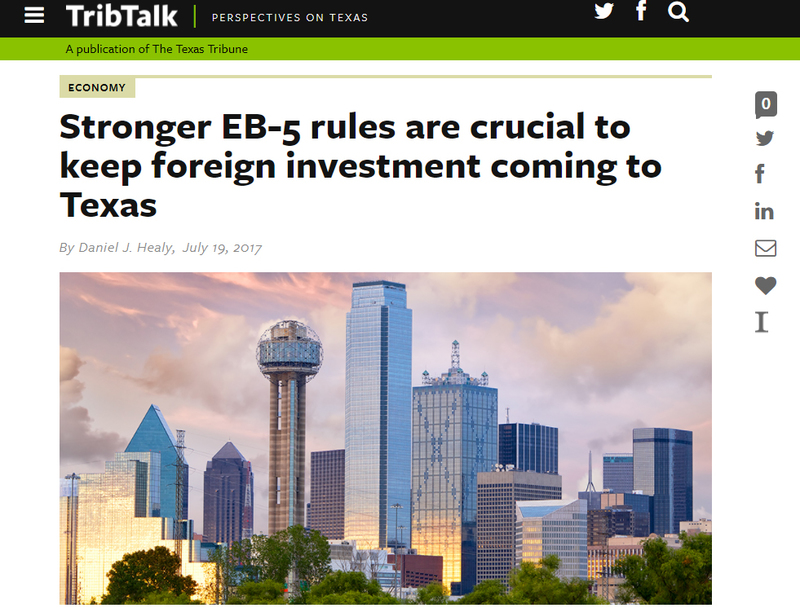 Paul Quinn College has long been a beacon of hope for its students and the surrounding Highland Hills neighborhood, one of many investment-poor areas of southern Dallas. To strengthen this historically black college’s bond with students, staff and the surrounding community, a public-private partnership is planning a high-quality early childhood education center and a neighborhood affordable housing project. It’s a worthy project, funded in a unique way: using money from foreign investors.

This project and many more like it across Texas has been funded by the EB-5 Immigrant Investor Visa Program, commonly called “EB-5.” Simply put, the program raises money from overseas investors and puts it into job-creating projects. As important: EB-5 doesn’t cost taxpayers a dime.

Despite its successes, the program needs reform. In fact, Texas leaders like U.S. Sen. John Cornyn are leading the discussion on Capitol Hill to put teeth into current EB-5 regulations so that bad actors don’t take advantage of the law and misuse those investments. We wholeheartedly support strengthening the program’s integrity as much as possible. To continue funding community-building investments such as those at Paul Quinn College, EB-5 must be above reproach.

In Texas, such “foreign direct investment” programs are growing because of our globally competitive business climate. EB-5, which has proven especially beneficial for Texas, eases the pathway to U.S. residency for foreigners who invest at least $500,000 in businesses that create no fewer than 10 U.S. jobs. The U.S. Commerce Department says that in fiscal year 2013, the program generated more than $5.8 billion in foreign investment to 562 projects nationwide, creating more than 174,000 jobs. The City of Dallas Regional Center, or CDRC, has attracted about $350M in EB-5 capital through a successful public-private partnership that costs taxpayers nothing.

Through EB-5, the City of Dallas has helped catalyze projects large and small. Examples include the NYLO Dallas SouthSide Hotel, the first full-service hotel built in southern Dallas since World War II, as well as the revitalization of the Farmers Market District and two affordable assisted-living facilities serving low-income seniors. In short, EB-5 is working for Dallas, and for Texas.

While we celebrate the formula for success, it can be improved. Sen. Cornyn and others support leveling the playing field for distressed urban and rural areas to compete for this nontraditional source of capital. The city’s Regional Center already funds projects in distressed urban areas with EB-5 capital, so we know the challenges these worthy projects face — and we know they can be overcome by creating effective incentives for investors.

In both testimony and written comments to congressional offices, we have made the case for a number of reforms: significantly increasing investment amounts; improving industry regulation; and closing the “gerrymandering” loophole that allows almost any location to qualify for a lower investment requirement meant to drive EB-5 capital to rural and distressed areas.

We have also embraced additional improvements to the program, including providing incentives such as visa set-asides for distressed rural and urban projects. This is all in addition to significant reforms agreed upon by virtually all stakeholders that will better deter fraudsters from exploiting the program. We would like to see many of those integrity reforms go even farther.

The future of EB-5 is in the hands of Congress, where our Texas senators and representatives are well aware of the program’s success in Dallas and elsewhere and have been vocal champions of the program. They know what we know about the direct benefit to Texas of foreign direct investment through EB-5. Texas’ continued prosperity is a choice — not a guarantee.