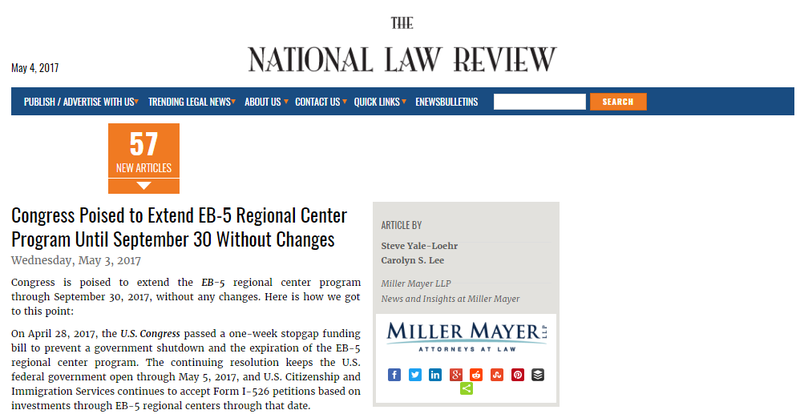 Congress is poised to extend the EB-5 regional center program through September 30, 2017, without any changes. Here is how we got to this point:

On April 28, 2017, the U.S. Congress passed a one-week stopgap funding bill to prevent a government shutdown and the expiration of the EB-5 regional center program. The continuing resolution keeps the U.S. federal government open through May 5, 2017, and U.S. Citizenship and Immigration Services continues to accept Form I-526 petitions based on investments through EB-5 regional centers through that date.

Behind the scenes, members of Congress and their staffs are negotiating an EB-5 reform package to include in the larger funding bill. The key issues concern: (1) raising the minimum investment amount from the current $500,000; (2) revising the definition of what constitutes a “targeted employment area” to allow certain investments at the minimum investment level; (3) establishing visa “set-asides” for investments in certain rural and truly distressed urban areas; and (4) establishing effective dates for the changes.

Congress is close on all these issues. Senator John Cornyn (R-Texas) is circulating one discussion draft; Senators Chuck Grassley (R-Iowa) and Patrick Leahy (D-Vermont) have circulated a similar discussion draft. Neither draft has been officially introduced; thus, they are not public.

It appears unlikely that Congress will be able to finalize an EB-5 reform package in time to include in the larger funding bill. On Sunday night, April 30, congressional leaders announced that they have finalized discussions on the key big-ticket items in the government funding bill, including more money for defense spending and border security. The funding bill is technically called an omnibus appropriations bill. The bill, H.R. 244, is available here. Section 542 of the bill includes a clean extension of the EB-5 program until September 30.

The House of Representatives is expected to vote on H.R. 244 on Wednesday. The bill will then proceed to the Senate with time to meet the deadline for approval by midnight Friday.

Given that the omnibus appropriations bill has already been introduced, it is hard to see how an EB-5 reform package could be included as an amendment to H.R. 244. It is more likely that Congress will extend the EB-5 regional center program without changes until September 30, as the bill already provides. During that time congressional negotiators will try to agree on final changes to the EB-5 program. Stay tuned.