Federal Adjustments Can Improve EB-5 Program For Entire US 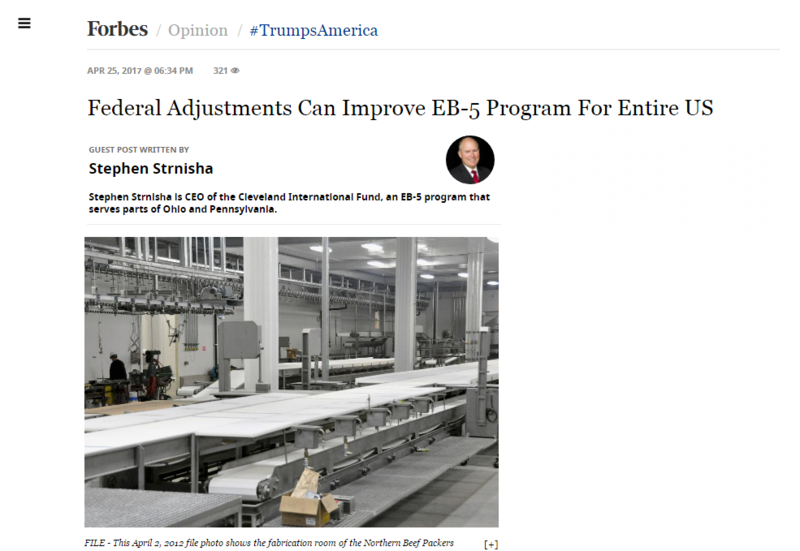 Amid the rancorous clatter often punctuating debates about U.S. immigration is a quieter discussion regarding a program that has been a vital catalyst for important projects that create American jobs and move communities forward.

When credit collapsed in 2008, the well-established but sleepy EB-5 Immigrant Investor Program suddenly came into substantial national demand as conventional financing dried up. The influx of foreign investment helped to finance job-creating developments that would not have been possible without it in distressed areas across the U.S. Unfortunately, the federally-sanctioned program has been tarnished by some high-profile failures and fraud. EB-5 is now on the bubble. While the program clearly needs adjustments, it would be a loss for the nation if it was abolished, as some advocate.

The fate of the program now rests with the new administration and Congress, which are debating its future. We thus have the opportunity to do an overhaul that would ensure it truly becomes the well-tuned economic development engine it was designed to be.

The EB-5 program was intended to be a path to permanent U.S. residency for foreigners who invest a minimum of $500,000 in U.S. projects that create American jobs in struggling parts of the country.

The program has enjoyed significant successes. For example, the Cleveland International Fund, an EB-5 program that serves parts of Ohio and Pennsylvania, has pumped $225 million into an array of successful, scandal-free projects. Those projects includes the rebirth of the Flats East Bank, what had been a downtrodden riverfront section of Cleveland, which resulted in substantial, subsequent private investment in that urban neighborhood that continues today.

We also helped to build a cancer center for Cleveland’s University Hospitals along with expansion of health facilities in under served parts of the region.

We are not alone in bringing EB-5 capital to markets struggling to attract capital in order to create jobs. Other EB-5 programs have used this critical funding source for projects such as the expansion of manufacturing capacity for the production of diesel engines in Racine, Wisconsin, and the development of medical facilities and a related multi-modal transportation hub in Buffalo, New York.

These are samples of how the nation’s heartland has benefited from EB-5, creating and retaining thousands of jobs that may not exist today but for the availability of this funding source.

After years of observations, I unfortunately must acknowledge that the EB-5 program has in some ways drifted off course. A handful of regional EB-5 programs have been stained by fraud.

The large majority of EB-5 centers across the country are like mine – scandal-free, successful and true to the program’s original, good intent. The problems within the program arguably stem from a few bad apples who have been able to operate within a period of rapid growth in demand, few promulgated regulations and sporadic regulatory oversight.

In addition, the program has a serious structural defect that has unfortunately directed more and more investor dollars to high-end real estate in locations that often don’t seem economically distressed. Yet incenting EB-5 funds to flow to projects in economically ailing areas has been a stated mission of the program since the early 1990s.

Flashy mega projects in cities such as New York or Los Angeles seem to have an advantage for foreign EB-5 investors over economically vital projects in places like Ohio and much of the nation that lies between the two coasts. It may be “flyover country” to some, but it’s home to tens of millions of Americans in urban and rural communities that are struggling.

Moreover, EB-5 investment has been limited each year despite strong investor demand due to the program’s annual 10,000 visa limit.

There needs to be federal legislative and regulatory action that ensures integrity within the industry and modifies program incentives to reduce the concentration of this crucial foreign capital in just a few U.S. cities at the expense of the rest of the country.

There is bipartisan interest in Congress to review and improve the EB-5 program, which has strayed from its founding principles.

Congress should keep EB-5 but implement reforms that can restore this well-intentioned program to its original intent of lawfully energizing depressed parts of our nation while simultaneously creating American jobs.