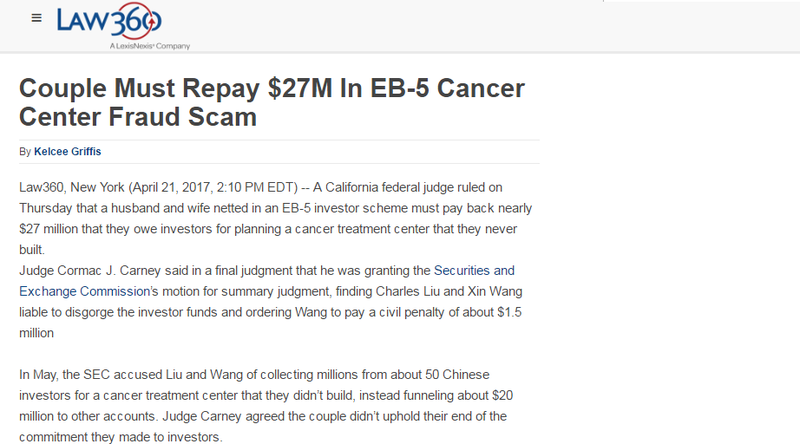 A California federal judge ruled on Thursday that a husband and wife netted in an EB-5 investor scheme must pay back nearly $27 million that they owe investors for planning a cancer treatment center that they never built.

Judge Cormac J. Carney said in a final judgment that he was granting the Securities and Exchange Commission’s motion for summary judgment, finding Charles Liu and Xin Wang liable to disgorge the investor funds and ordering Wang to pay a civil penalty of about $1.5 million

In May, the SEC accused Liu and Wang of collecting millions from about 50 Chinese investors for a cancer treatment center that they didn’t build, instead funneling about $20 million to other accounts. Judge Carney agreed the couple didn’t uphold their end of the commitment they made to investors.

“Despite significant investment, nearly no construction on the proton therapy center has taken place. Instead, Liu burned through the millions left after payments to himself, Wang, and the marketers on half-hearted attempts to convey the illusion of progress,” according to the ruling.

Liu and Wang channeled the scheme through the U.S. government’s EB-5 immigrant investor program, in which foreign investors pledging at least $500,000 in capital investment in a commercial enterprise in the U.S. may be eligible for a two-year work and residency visa, with the potential for permanent residency.

Liu transferred about $12.9 million of the investor funds to three marketing firms in China — including one of which he is CEO and chairman — and deposited more than $7 million in his and his wife’s personal accounts, the SEC said. He had used up all but $250,000 of the funds, the government alleged.

In October, the court entered a preliminary injunction against Liu and Wang, ordering them to send $26 million back to their investors, but they didn’t comply, according to the judgment.

Now, Judge Carney has entered a permanent injunction against the couple, ordering that they may no longer be involved in EB-5 solicitation and noting there was “overwhelming evidence that Liu and Wang acted with a high degree of scienter.” He also ordered that Liu give back the $26.7 million collected from investors and levied a $1.5 million civil penalty against Wang for her involvement. The amount is significantly less than the SEC originally sought.

Counsel for the parties could not be immediately reached for comment.

The SEC is represented by its own John W. Berry, Gary Y. Leung and Jacob A. Regenstreif.

Wang and Liu are represented by Lawrence B. Steinberg of Buchalter Nemer PLC and Herve Gouraige of Sills Cummins & Gross PC.