Couple charged in US with fraud in investor visa scheme 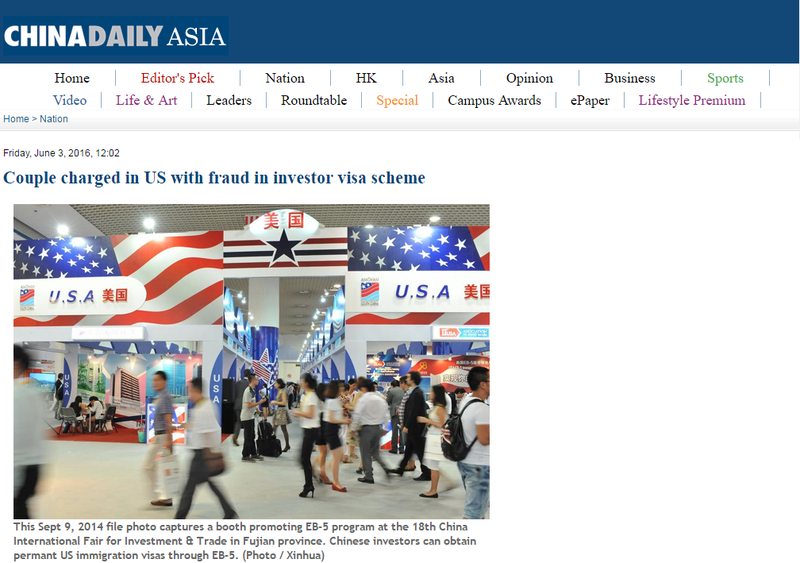 A California couple raised US$27 million from at least 50 Chinese investors seeking US immigration visas but misused two-thirds of the money, instead of building a cancer treatment center they had proposed, the US Securities and Exchange Commission (SEC) said on Thursday.

Charles C Liu and Xin "Lisa" Wang, both of Laguna Niguel, California, promoted the facility as a project that would help the Chinese investors obtain permanent US immigration visas through a federal program known as EB-5, the SEC said.

But Liu transferred US$11.8 million of the funds to three firms in China, including one in which he is chief executive and chairman, according to the SEC's civil complaint, unsealed in a Los Angeles federal court on Thursday.

Liu also diverted another US$7 million to personal accounts for him and Wang, the SEC said. No construction has started at the proposed facility site more than 18 months after the couple began taking investments, the SEC said.

A lawyer for Liu and Wang did not return a call requesting comment.

The SEC obtained a court order freezing the assets and accounts of Liu, Wang, and their entities, as well as barring them from collecting additional funds, the agency said.

Under the federal EB-5 program, wealthy foreigners can in effect buy US immigration visas for themselves and families by investing at least US$500,000 in certain development projects. In the past two decades, much of the investment has gone into commercial real-estate projects such as luxury hotels, ski resorts and gas stations.

But the program has also sparked concerns about possible scams, which the SEC addressed in a 2013 investor warning. The Liu case is one of several EB-5 fraud cases filed the agency has filed since that warning.

The project's investors were told that the center would provide a cancer treatment that uses protons, instead of x-rays, to treat cancer, and create more than 4,500 full-time jobs. The proposed building, slated for Montebello, California, would contain 125,000 square feet, according to the SEC's complaint.

Most of Liu's fund transfers occurred in February and March, just after the SEC subpoenaed Liu in its investigation, according to the SEC's complaint.

The SEC, whose lawsuit also names business entities related to the purported treatment center, is seeking preliminary and permanent injunctions as well as disgorgement of ill-gotten gains plus interest and penalties.

The case is US Securities and Exchange Commission v Liu US District Court, Central District of California, 8:16-cv-00974-CJC-AGR.