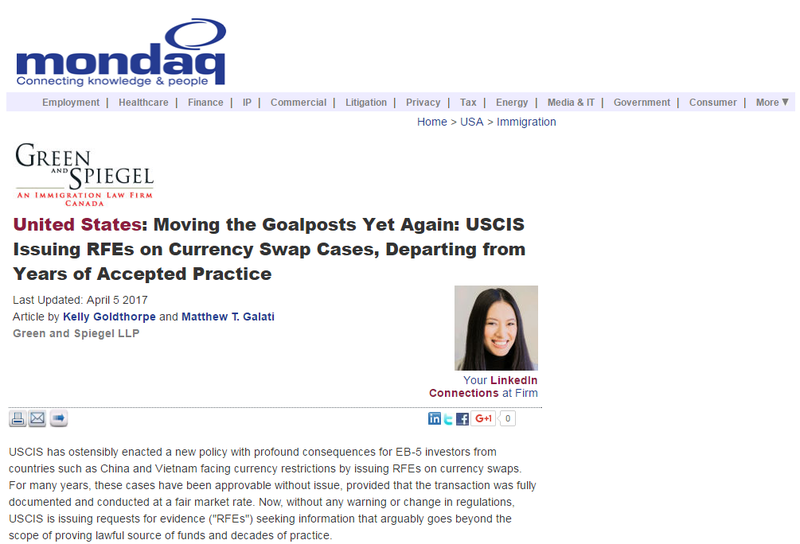 USCIS has ostensibly enacted a new policy with profound consequences for EB-5 investors from countries such as China and Vietnam facing currency restrictions by issuing RFEs on currency swaps. For many years, these cases have been approvable without issue, provided that the transaction was fully documented and conducted at a fair market rate. Now, without any warning or change in regulations, USCIS is issuing requests for evidence ("RFEs") seeking information that arguably goes beyond the scope of proving lawful source of funds and decades of practice.

By way of background, an EB-5 investor must generally place his or her investment into a new commercial enterprise / it's escrow account prior to filing. The invested capital must be sourced (i.e. evidenced that it originates from lawful sources) and fully traced (documentation of a full chain of custody working backwards from the escrow account to those sources). Investors in some countries, such as China and Vietnam, have a tougher time tracing their funds because of domestic currency restrictions. In China, investors have utilized options such as the "friends and family method" whereby Renminbi is divided amongst individuals, converted into dollars, and then recollected offshore. In Vietnam, currency restrictions are much more severe and the "friends and family method" is not commercially feasible. Accordingly, some investors have turned to offshore exchange houses to convert Dongs into dollars.

But investors from both countries, as well as other investors facing fluctuating currency values or onerous controls, have also used currency swaps. In such arrangements, an investor will wire local currency into an intermediary's local bank account. The intermediary, in turn, then wires the equivalent amount in U.S. dollars to the investor's account offshore. The investor can then supply the needed funds into the escrow account. This practice has led to I-526 approvals for hundreds, perhaps even thousands, of investors.

From the earliest days of EB-5, USCIS has consistently maintained a policy of not policing foreign currency laws or questioning investors' methods of investing in light of such laws as these activities were seen to fall beyond the scope of the agency's role.  Yet without warning or any change in the law, USCIS is now issuing RFEs in currency swap cases seeking that investors source the U.S. dollars transferred by the third party to the investor were obtained through lawful means.

This sudden departure from accepted practice is troubling, especially as substantive changes to the program are looming. As our colleagues pointed out last month, USCIS and the U.S. Congress are weighing a massive increase in the minimum investment amounts based on a false idea that Canadian investor immigration is more expensive (it's generally not).

USCIS raises conceptional issues as well. For example, EB-5 investments need not be cash – if an investor were to purchase land or equipment and contribute such capital (this is quite common in Direct EB-5), would USCIS require the asset purchased be sourced then? Further, even established banking institutions are have made headlines for being under investigation for illegal practices, including money laundering, yet currency exchanges through brick-and-mortar banks remain acceptable.

USCIS accordingly should rethink its recent RFE trends in accordance with its own historical practices and make any substantive changes to the law through notice and comment rulemaking. This is especially so as the substitution effect of acquiring residency in Canada or the Caribbean grows and EB-5 investors weigh uncertainties relating to statutory and regulatory reforms.