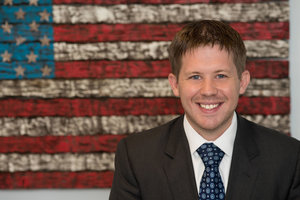 Matthew T. Galati is a Philadelphia-based immigration attorney at Green and Spiegel, LLC. Matt leads the Firm’s U.S. Investors and Entrepreneurs Division, dedicated to representing individuals and companies seeking use of foreign investment in the immigration context.

Matt has experience with nearly every aspect of immigration law and focuses the majority of his practice on EB-5-related matters. Matt has handled the preparation of hundreds of Form I-526 and Form I-829 petitions, as well as regularly advising project principals utilizing the program. Further, Matt has creatively utilized the H-1B, O-1, E-2, L-1, National Interest Waiver, and EB-1-C visa classifications in order to secure immigration benefits for his entrepreneurial clientele.

He is also active in the immigration law community. Matt is a member of the American Immigration Lawyers Association (AILA) and serves on the Philadelphia chapter’s Executive Committee as its Vice Secretary. He was named a 2016 “Rising Star” in the field of business immigration by Pennsylvania Super Lawyers magazine.

In 2010, Matt earned his Juris Doctor, with honors, from The George Washington University Law School. He received his bachelor’s degree from the University of Virginia in 2007, with a double major in Politics and History. While in law school, he studied abroad as part of the Pennsylvania State University Dickinson School of Law’s Capitals of Europe Summer Program, focusing on comparative European Union law.

We’ve Secured a Major Victory Regarding EB-5 Delays
September 03, 2020
EB-5 Visa Demand Slows in Early 2019; Launching Vietnam Forward and Calling Into Question Whether India Retrogression Will Take Effect This Fiscal Year
April 02, 2019
Might This Be ‘Last Call’ for $500,000 EB-5?
October 28, 2018
Retrogression Besets Vietnam – But It's Not Going To Be As Bad As China
April 03, 2018
Green and Spiegel Attorney Matthew Galati Named in EB-5 Investors
January 08, 2018
United States: This Week – And Month – Will Be Critical For The EB-5 Program
December 04, 2017
La Vida and Green & Spiegel Announce Partnership for EB-5
August 10, 2017
Green And Spiegel's Matthew Galati Opines On Inaccurate USCIS Data In The Real Deal Interview
June 23, 2017
Government releases crucial EB-5 data – but beware, it could be full of flaws
June 21, 2017
USCIS Published I-526 / I-829 Performance Data By Regional Center, But Accuracy Of Data Called Into Question
June 21, 2017
United States: Moving the Goalposts Yet Again: USCIS Issuing RFEs on Currency Swap Cases, Departing from Years of Accepted Practice
April 05, 2017
United States: No, Congressman, Canada's Investor Programs Do Not Require Million-Dollar Plus Investments
March 27, 2017
What is EB-5 Qualifying Job Creation Anyway?
March 07, 2016
House Members Introduce Bipartisan Companion EB-5 Integrity Act Bill
February 11, 2016
It’s time for USCIS to issue new source of funds guidance — but until then, here’s what investors can do
November 05, 2015
The Shareholder Loan Source of Funds is Alive and Well
June 26, 2015