Hirson and Jahangiri: Instead of Pressuring Mexican President Peña Nieto, We Have a Solution to Fund the U.S.-Mexico Wall 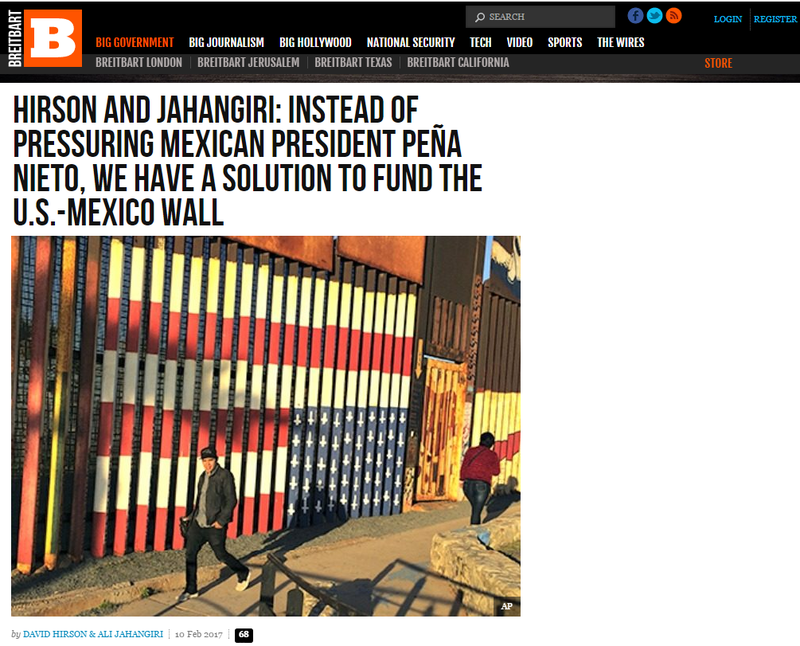 The huge infrastructure project in question is the approximately 2,000-mile-long wall along the United States’ southern border with Mexico. This project has been estimated to cost somewhere between $10-20 billion. While the project is supported by many Americans, it’s not a burden the American taxpayer is going to want to shoulder or a project we should financially burden our ally and neighbor with.

To date, two ideas have been floated in terms of how to pay for this project and neither has garnered much enthusiasm. Mexican President Enrique Peña Nieto has made it clear that Mexico has no intention of paying for the project and will resist all attempts to impose this on Mexico. As such, tensions have escalated to a point that President Peña Nieto canceled his trip to the United States this month.

The second idea of imposing a 20 percent import tax on products from Mexico was met with quick resistance as many argued this would ultimately place the burden of payment on American consumers. In fact, this generated quite a storm on social media and the Internet as one-liners about $32 avocados began to whiz about. Americans would have to buy between $20-25 billion dollars of avocados to pay for the wall. In my opinion, this doesn’t sound like a plausible plan.

It should be noted that Mexico is the third largest supplier of imported goods into the United States. Along with the more than $21 billion in agricultural imports, Mexico provides $74 billion alone in vehicle imports and $63 billion in electrical machinery imports.

It’s time to forget the usual suspects here. The solution is fairly simple. A hybrid of the already existing EB-5 program, which has been used to finance large real estate projects over the past decade. Using similar principles, we can easily finance the wall through an EB-6 program. You can literally have high-net-worth immigrants pay for the wall. Without a doubt, the demand is there. Currently, there is a six-year waiting list for EB-5 visas since the demand is so high.

The program has been used to help finance large real estate projects, in addition to infrastructure, mining, agriculture, energy, and restaurant projects—just to mention some of the projects. For example, the Pennsylvania Turnpike raised $200 million in EB-5 funds for their recent interchange project. This project is estimated to have created 5,000 jobs for U.S. workers at zero cost to taxpayers. All in all, last year, the EB-5 program raised $6 billion and financed over 100 projects nationwide. Some of these projects you have probably heard of like the SLS Las Vegas Hotel & Casino, the Sacramento Kings Golden 1 Center, Waldorf Astoria Beverly Hills and 1 Wall Street in New York City.

The suggestion here, however, is not to use EB-5 funding for the wall, but rather to use EB-5 as the inspiration for a funding solution. Build on the success of EB-5 program by creating an EB-6 visa category to specifically fund “The Wall.”

Here is how it would work: Start with $20 billion of financing as the target. Sounds like a lot, no? Well, it’s not that much money when you think of each immigrant paying $1 million to qualify for a green card. I know what you are thinking—that these immigrants are going to cost the American people by increasing the number of people in the country. The answer is this would not increase the number of immigrants. You would allocate 20,000 visas for a new EB-6 category. These 20,000 visas would have to be shifted from an existing “free” visa lottery program. All you’d need to do is reduce the number of visas in the diversity lottery program from 50,000 to 30,000 for one year. The diversity program is a lottery green card program that gives away green cards with no net gain to the United States.

Twenty thousand visas times $1 million each is $20 billion. Take the demand for living in the United States and monetize it, and at the same time, it won’t increase the number of immigrants that come into the country. You’re merely shifting some free visas that you would give away through the lottery to a “paid” EB-6 program that is in high demand.

As professionals who work in the EB-5 industry, we know we can sell enough $1 million EB-6 visas in three years. Give us a chance to pay for this wall, Mr. President.

This could raise $20 billion for the project in the first three years to pay for most, if not all, of the wall without costing American taxpayers a single penny.

The proposed EB-6 program would attract high-net-worth entrepreneurs that often fuel the economy even more by starting their own businesses when they arrive in the United States. They also purchase expensive homes and pay substantial federal, state, and local taxes. With a $1 million nonrefundable contribution, the EB-6 visa would also attract highly skilled immigrants who would continue to contribute to the United States long after making their initial contribution.

Just give us a chance to pay for the wall, Mr. President. EB-6 is the answer we all seek.