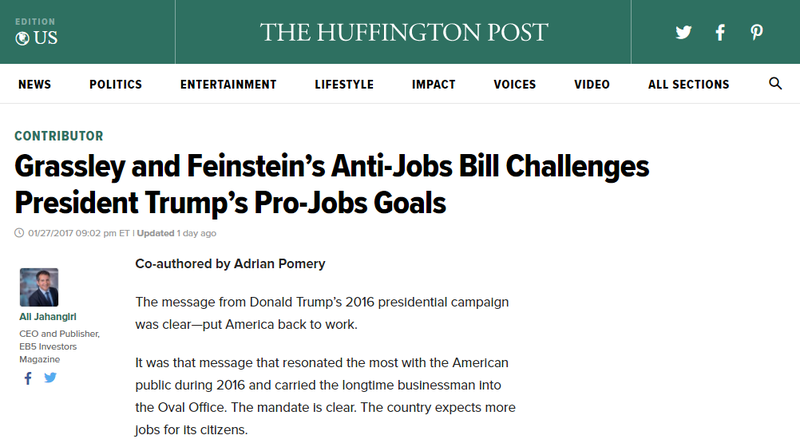 The message from Donald Trump’s 2016 presidential campaign was clear—put America back to work.

It was that message that resonated the most with the American public during 2016 and carried the longtime businessman into the Oval Office. The mandate is clear. The country expects more jobs for its citizens.

It is against this backdrop and clear mandate that U.S. Senators Diane Feinstein (D-CA) and Chuck Grassley (R-IA) decided to slap the American public and common sense across the face with the introduction of S.232. The bill would eliminate the entire EB-5 program, a program that has the sole focus of creating U.S. jobs at zero expense to the taxpayer. This proposed anti-jobs bill—the spirit of which is antithetical to the voter mandate undergirding Trump’s election—would reallocate the 10,000 visas allotted to the program to four other employment-based visa categories.

The tremendously popular EB-5 program allows a foreign investor to earn a green card by investing $500,000 or $1 million into a new commercial enterprise that creates at least 10 full- time jobs for U.S. citizens and legal U.S. residents. Along with its job creation requirement, the program does not cost taxpayers a single cent as the investor’s application fee supports the program’s administrative costs.

You could spend days looking at the micro effects of EB-5, but it is also important to look at the impact of EB-5 from a macro standpoint. The Economics and Statistics Administration (ESA) of the Department of Commerce (DOC) conducted an assessment of the EB-5 program to determine its size and its contribution to the U.S. economy. They found that over the two-year period of FY2012 and FY2013, there was a dollar value of investment of $16.4 billion and 169,759 expected jobs from 134 projects in EB-5 Regional Centers. These are new American jobs created by foreign direct investment at zero cost to taxpayers.

The total impact of EB-5 goes well beyond the initial $500,000 that an immigrant investor will put into a new commercial enterprise. These investors will move to the United States where they will purchase real estate, open businesses, and pay federal, state, and local taxes. A 2015 study by economists Scott and Cora Barnhart found that the issuance of just 8,000 EB-5 visas, which is the equivalent of slightly more than 2,500 investors, would result in 46,124 jobs while providing more than $532 million in federal tax revenues and $371 million in state and local tax revenues.

It’s important to note that this foreign capital and its significant economic impact does not have to find its way to the United States. Other options for foreign investors exist. The United Kingdom, Australia, and Portugal are among many countries that offer investment immigration programs. To date, the EB-5 program has been the most popular option as it is competitively priced and investors are often motivated by providing a good education for their children. More than half of the world’s top 100 universities are situated in the United States.

The madness of the bill put forth by Senators Feinstein and Grassley is compounded by the fact that they are moving in the complete opposite direction as President Trump. Common sense would hope that Congress should be focused on expanding the program which brings millions of investment dollars and thousands of jobs to the U.S. Currently, with derivatives, spouses and minor children, being counted against the 10,000 visas allocated to the program each year, only 3,000 or so actual investments can be processed each year.

This has resulted in a massive backlog where investors may now be waiting five to six years to obtain their initial two-year conditional green card. At some point this backlog, called retrogression, will significantly reduce the demand for the program. Less demand equals less foreign capital which equals less jobs for Americans.

The mandate is clear. Jobs are at the forefront for the American public. Let’s create jobs. Let’s extend and expand the EB-5 program.