The Truth of the Matter: Casualties of the Shumlin Administration 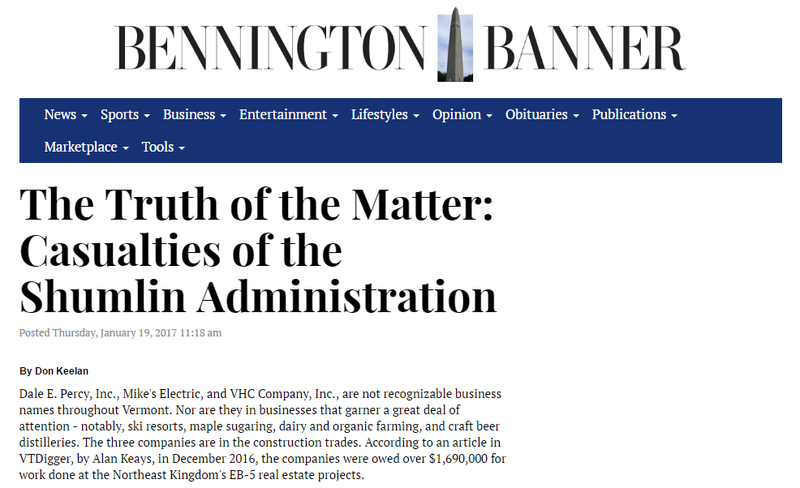 Dale E. Percy, Inc., Mike's Electric, and VHC Company, Inc., are not recognizable business names throughout Vermont. Nor are they in businesses that garner a great deal of attention - notably, ski resorts, maple sugaring, dairy and organic farming, and craft beer distilleries. The three companies are in the construction trades. According to an article in VTDigger, by Alan Keays, in December 2016, the companies were owed over $1,690,000 for work done at the Northeast Kingdom's EB-5 real estate projects.

The Digger piece noted that, in addition to these companies, other small construction contractors are owed upward of $5 million and the chances of them ever seeing any payments are still an uncertainty - although recent developments may allow for significantly reduced payments. The construction trades in Vermont are not the focal point of any article in Vermont Life Magazine. They rarely, if ever, receive attention - until, of course, the lights go out, plumbing gets backed up, or an excavator or a D-8 bulldozer is needed on site.

Nonetheless, the dozens of trades that worked on the EB-5 project overcame a tight building schedule and Northeast Vermont weather. What they did not see coming at them was the alleged massive fraud that was being carried out by the owners of the half-billion dollar projects. They, like many others, believed that Vermont State agencies were overseeing the financial aspects and, once their work was in place, they would be paid. But they weren't the only believers.

Vermonters have been known to be caring people when it pertains to immigrants who elect to come to their state. Cities and towns go out of their way to make sure that our state's new residents are welcomed and provided for - with one exception. That exception is those immigrants who had elected to come to Vermont by having applied through the federal government's EB-5 program.

Since 2007, close to 837 immigrants have applied for a "green card" (visa), investing over $500,000 in the NE Kingdom real estate projects. Not unlike the building contractors, over 400 of the immigrants will never see their money again and worse, will not obtain a visa to resettle in Vermont. Had the 400 been from Syria and lost all of their financial holdings to a Vermont-based fraud, there would be massive protests in Montpelier seeking help for them.

2016 was not a banner year for state officials charged with watching out for the welfare of its citizens and citizens to-be. An hour's drive west of the NE Kingdom, there once was a boutique college, Burlington College. Its 250 or so students, and dozens of faculty and staff members had also relied upon state officials to make sure that the college was being properly operated. In the spring of 2016, they were told to leave the premises - the college was to be closed because it ran out of cash stemming from an alleged real estate financial fraud, perpetrated in 2010.

Vermont government has one overriding responsibility, and that is to protect its citizens. The above disasters could have been avoided had the Agency of Commerce and Community Development, the Department of Financial Regulation, the Education Department and the Office of Attorney General (it oversees nonprofit corporations) had done the job that they are charged to do. Also, had the Shumlin Administration not attempted to block the early warning signs of a pending EB-5 financial scandal raised by VTDigger's reporting.

In time, the historians will write the final chapter on what had transpired in 2016 at Burlington College and in the Northeast Kingdom. They will conclude that negligence, political pressure, and conflicts of interest brought about the two disasters, thus creating a casualty list comprised of scores of businesses and hundreds of citizens and potential citizens. Vermont has never experienced such massive frauds and how they were allowed to continue must be memorialized.