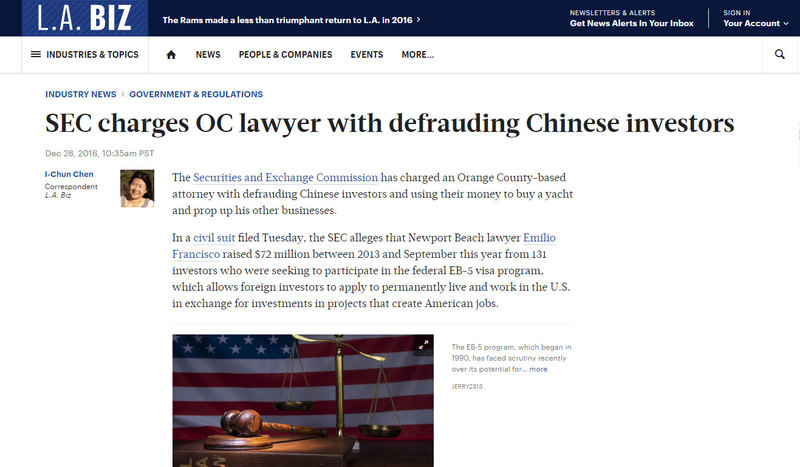 The Securities and Exchange Commission has charged an Orange County-based attorney with defrauding Chinese investors and using their money to buy a yacht and prop up his other businesses.

In a civil suit filed Tuesday, the SEC alleges that Newport Beach lawyer Emilio Francisco raised $72 million between 2013 and September this year from 131 investors who were seeking to participate in the federal EB-5 visa program, which allows foreign investors to apply to permanently live and work in the U.S. in exchange for investments in projects that create American jobs.

The EB-5 program, which began in 1990, has faced scrutiny recently over its potential for fraud.

None of the assisted living facilities have been built, although some of the Caffe Primo locations have opened, according to the suit.

According to the SEC’s complaint, Francisco and PDC Capital diverted investor funds from one project to another and stole at least $9.6 million that was used to finance Francisco’s own businesses and luxury lifestyle. Francisco was allegedly aware that doing so would violate federal regulations and jeopardize any visas for the foreign investors.

“As alleged in our complaint, Emilio Francisco illegally enriched himself with investor money intended for specific EB-5 projects that create jobs for U.S. workers,” Michele Wein Layne, director of the SEC’s Los Angeles Regional Office, said in a statement.

The SEC is seeking an emergency asset freeze and a court-appointed receiver over Francisco’s businesses involved in the schemes.

The EB-5 program, which began in 1990, has faced scrutiny recently over its potential for fraud. The SEC filed five EB-5 fraud cases last year and more this year, according to the Los Angeles Times. Some of those cases have Southern California ties, where Chinese investors have been active. During the 12 months through September 2015, Chinese citizens made up 84 percent of U.S. visas obtained through the program, the Times said.

The EB-5 program requires a foreign investor to invest at least $500,000 in a “Targeted Employment Area” that will create at least 10 full-time jobs for U.S. workers. If that and other conditions are met within a two-year period, the foreign investor may apply to live and work in the United States permanently.