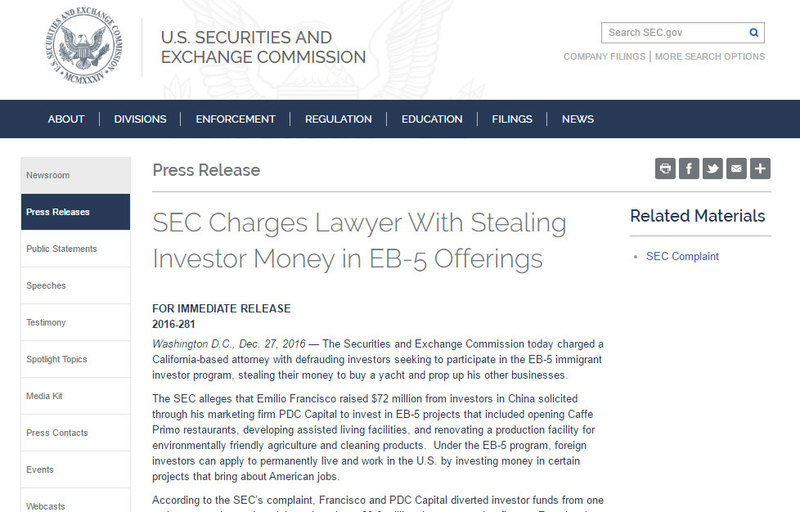 The Securities and Exchange Commission today charged a California-based attorney with defrauding investors seeking to participate in the EB-5 immigrant investor program, stealing their money to buy a yacht and prop up his other businesses.

The SEC alleges that Emilio Francisco raised $72 million from investors in China solicited through his marketing firm PDC Capital to invest in EB-5 projects that included opening Caffe Primo restaurants, developing assisted living facilities, and renovating a production facility for environmentally friendly agriculture and cleaning products. Under the EB-5 program, foreign investors can apply to permanently live and work in the U.S. by investing money in certain projects that bring about American jobs.

According to the SEC’s complaint, Francisco and PDC Capital diverted investor funds from one project to another and outright stole at least $9.6 million that was used to finance Francisco’s own businesses and luxury lifestyle. Francisco was allegedly aware that doing so would violate federal regulations and jeopardize any visas for the foreign investors.

The SEC’s investigation has been conducted in the Los Angeles office by Adrienne D. Gurley, Jasmine Starr, and Christopher M. Conte, and the case has been supervised by Spencer Bendell, Alka N. Patel, and John W. Berry. The SEC’s litigation is being led by John B. Bulgozdy. The SEC appreciates the assistance of U.S. Citizenship and Immigration Services.