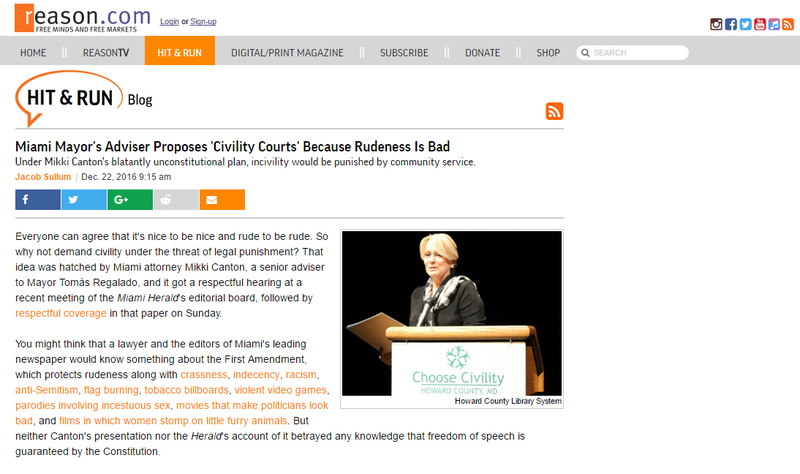 Under Mikki Canton's blatantly unconstitutional plan, incivility would be punished by community service.

Everyone can agree that it's nice to be nice and rude to be rude. So why not demand civility under the threat of legal punishment? That idea was hatched by Miami attorney Mikki Canton, a senior adviser to Mayor Tomás Regalado, and it got a respectful hearing at a recent meeting of the Miami Herald's editorial board, followed by respectful coverage in that paper on Sunday.

You might think that a lawyer and the editors of Miami's leading newspaper would know something about the First Amendment, which protects rudeness along with crassness, indecency, racism, anti-Semitism, flag burning, tobacco billboards, violent video games, parodies involving incestuous sex, movies that make politicians look bad, and films in which women stomp on little furry animals. But neither Canton's presentation nor the Herald's account of it betrayed any knowledge that freedom of speech is guaranteed by the Constitution.

"I think we're at the point of urgency," Canton told the paper's editorial board. "It's not just because you've got this political situation the way it is. But you've got behaviors, people doing things and other people thinking that's OK and there's no alternative to that way." Her answer: "civility guidelines," to be enforced by "civility courts."

Canton—who in addition to advising the mayor runs Miami's EB-5 Regional Center, part of a federal program that guides foreign investors thinking of moving to the U.S.—explained that rudeness must be banned because it is often perfectly legal. "Sometimes what you do doesn't rise to the level of breaking the law," she said, "but it sure does break civility rules."

Mind you, Canton does not want to throw people in jail merely for being rude. But she figures that "making them do some community outreach work, where they actually get a chance to interact with people and be civil," might do the trick. "If I were the judge," she said, "I'd say, 'What was it?' and 'Where did he commit this offense that didn't rise to the level of breaking the law?'...I would put him out there and make him be the spokesperson and make him work some community hours."

Setting aside the wisdom of putting people distinguished by their extraordinary rudeness on the front lines of "community outreach," Canton's scheme is blatantly unconstitutional, as Miami New Times writer Jessica Lipscomb pointed out a couple of days after the Herald published its story about Canton's Civility USA campaign. Unlike Herald reporter Alfonso Chardy, who did not include a single skeptical comment in his story, Lipscomb interviewed "two First Amendment lawyers," who "were stunned when New Times told them of the proposal." One of them noted that "people have a right to be very vocal and uncivil...to use swear words and very strong language," because "in the United States, the rule has been that government cannot punish that type of speech."

Confronted by the First Amendment implications of her proposal, Canton told Lipscomb that rude statements with political content would be exempt from her civility code, which is funny for a couple of reasons. First, speech protected by the Constitution is not limited to political messages; it includes opinions on all sorts of subjects, no matter how hurtful or how rudely expressed. Second, the chief example of incivility mentioned in Chardy's story, one that came up during Canton's presentation to the Herald's editorial board, involved an unhinged Donald Trump supporter who called a local Starbucks barista "trash" and "garbage" while accusing her of refusing to serve him because of his taste in presidential candidates (and possibly his skin color; it's not entirely clear). Canton's civility courts evidently will have to weigh the motivations of rude people before punishing them, which will create an incentive to mention a politician or a cause while castigating an inattentive barista or telling a nosy neighbor to fuck off.