People need to be nicer, lawyer says. And if they’re not? Punishment may await 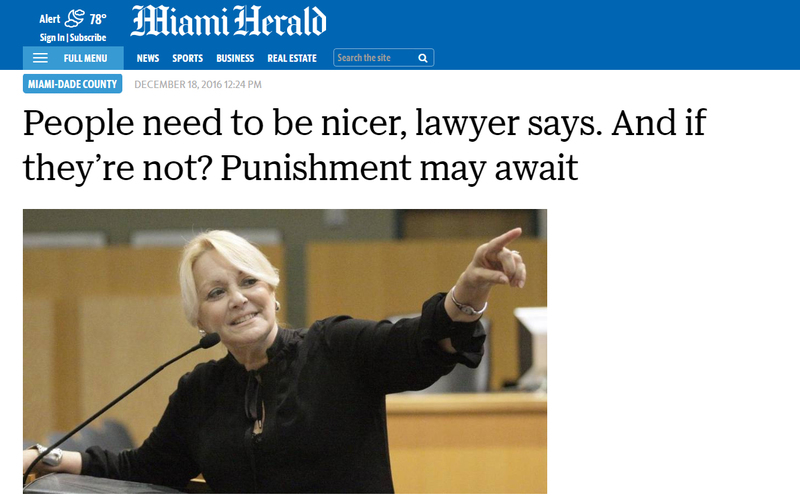 Attorney Mikki Canton speaks at the City of Miami City Hall in 2012.

At a time when many are decrying the end of civility, a Miami attorney has launched a proposal to persuade people to be more civil to each other. And it comes with teeth: specific guidelines and even civility courts to hand down punishments like community hours.

Civility USA is the idea floated by Mikki Canton at a presentation before the editorial boards of the Miami Herald and el Nuevo Herald on Tuesday. She urged editorial support for an idea she called “urgent,” given the growing perception about a rise in bullying and a decline in civility in daily life and politics.

“I think we’re at the point of urgency,” Canton said. “It’s not just because you’ve got this political situation the way it is. But you’ve got behaviors, people doing things and other people thinking that’s OK and there’s no alternative to that way.”

Among the examples cited at the editorial board discussion was last month’s episode at a Coral Gables Starbucks where a man, David Sanguesa, was captured on video angrily yelling “Trump!” and “I voted for Trump!” at a barista when he felt he didn’t get his tall vanilla latte quickly enough because he was white. Then he demanded his money back, calling her “trash” and “garbage.”

Canton arrived from Cuba with her family when she was 8. The family settled first in New York, then moved to Miami when she was 14.

She attended the Academy of the Assumption and later Barry University. She got a law degree from St. Thomas University and for 17 years worked at Holland & Knight.

She now is chief strategic adviser and global affairs counsel at the office of Miami Mayor Tomás Regalado. She is also managing director of the Miami regional center EB-5, a federal program under the Department of Homeland Security and U.S. Citizenship and Immigration Services that offers opportunities for foreign investors seeking residence.

Besides mentioning that basic civility guidelines could be drawn up, Canton also spoke of establishing “civility courts” that would be empowered to hand down noncriminal punishments like community work.

“I had talked to the judges about getting civility courts,” Canton said. “Sometimes what you do doesn’t rise to the level of breaking the law, but it sure does break civility rules.”

Asked what types of punishment she envisioned, Canton provided a specific example.

“Making them do some community outreach work, where they actually get a chance to interact with people and be civil,” she said. “If I were the judge I’d say, ‘What was it?’ and ‘Where did he commit this offense that didn’t rise to the level of breaking the law,’ and I would put him out there and make him be the spokesperson and make him work some community hours.”