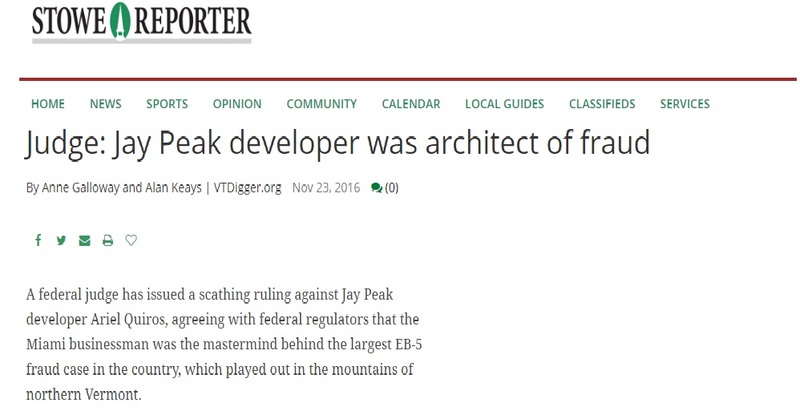 A federal judge has issued a scathing ruling against Jay Peak developer Ariel Quiros, agreeing with federal regulators that the Miami businessman was the mastermind behind the largest EB-5 fraud case in the country, which played out in the mountains of northern Vermont.

District Judge Darrin P. Gayles, in a ruling handed down Monday in Miami, wrote that Quiros was the architect of a scheme to deceive hundreds of investors over an eight-year period.

The judge froze the assets Quiros accumulated through investor funds. Those assets include two ski resorts, one in Jay and another in East Burke, and properties in the town of Newport, in addition to money raised from immigrant investors meant to pay for developments. Gayles also barred Quiros from raising more money through the EB-5 visa program as he heads toward a civil trial. In a previous ruling, Gayles severely limited the amount of money Quiros could use for his legal defense.

Gayles granted a Securities and Exchange Commission request for the injunction. In a 44-page ruling, he said the SEC wove “a compelling and well-documented account of one man’s use of his control over multiple entities to squander investor funds, enrich himself, and, ultimately, commit securities fraud.”

In an evidentiary hearing last May, SEC provided the court with 141 exhibits and testimony from five witnesses, including a Vermont regulator. Federal litigators showed that Quiros improperly commingled funds in a complicated financial scheme that involved more than 100 bank accounts and 1,000 transactions. The SEC said the Miami businessman leveraged more than $100 million in investor funds for margin loans.

“The record supports a preliminary finding that Quiros was the architect of a fraudulent scheme to use the investor funds to enrich himself,” Gayles wrote.

“The result is a financially strapped ski resort, unpaid contractors, unfinished projects, and unhappy investors at risk of losing their residency status in the United States,” Gayles added. “Accordingly, the court finds a preliminary injunction necessary to maintain the status quo pending trial on the merits.”

What did Vermont know?

Meanwhile, the Vermont state government released heavily redacted records to VTDigger in response to a request for documents related to the status of the Vermont EB-5 Regional Center and state oversight of EB-5 projects in the Northeast Kingdom that regulators say is part of a “Ponzi-like” scheme.

The documents that are not redacted shed little new light into questions raised by the U.S. Citizenship and Immigration Service about Vermont’s EB-5 program and the role state officials played in overseeing the $400 million-plus developments in Newport, Jay and Burke.

VTDigger sued over the records in October, arguing that the public has a right to know the status of the EB-5 regional center in light of the federal inquiry.

The news organization received the documents a little after 4 p.m. Friday. Of the 131 pages provided, 43 are redacted in whole, and another 10 are partially redacted.

VTDigger is continuing to seek access to the redacted documents through a lawsuit filed last month in Washington County Superior Court against the state of Vermont.

“The state’s response is unacceptable,” said attorney Tim Cornell, lead counsel for the case on behalf of VTDigger and its parent organization, the Vermont Journalism Trust. “We are sorry that we need to continue to litigate to force the state to turn over documents the public, by all rights, should see.”

The Vermont chapter of the American Civil Liberties Union joined VTDigger in pursuit of the records through the lawsuit late last month, with Lia Ernst, an attorney with the organization, serving as co-counsel.

The dispute over the records began in August when VTDigger requested communication over a period of seven days between state Agency of Commerce and Community Development, including the Vermont EB-5 Regional Center, and U.S. Citizenship and Immigration Services. The federal citizenship agency had asked the state to respond to questions about its oversight of EB-5 projects through the regional center.

The state denied the news organization’s request in late August, claiming the “litigation hold” exemption in Vermont’s Public Records Law. The attorney general’s office contends the documents need to be kept private due to the possibility they could become part of the state’s lawsuit against Jay Peak developers Ariel Quiros and Bill Stenger.

VTDigger argues that the documents are irrelevant to the state’s case against Quiros and Stenger.

The news organization says the state is improperly using the litigation hold to avoid accountability.

“Using the cloak of the litigation exception to the Public Records Act, the State of Vermont has denied all access to these records, citing its litigation against the Jay Peak enterprises and Ariel Quiros and William Stenger,” Cornell writes in the lawsuit. “As a legal matter, these records could not be discoverable by the defendants in that action because they are not in any way relevant to that litigation.

Officials with the Vermont EB-5 Regional Center were responsible for overseeing the Jay Peak resort developments.

Documents VTDigger previously obtained from the state show that in 2012, a former business partner and others raised questions about financial irregularities at Jay Peak.

In 2013, Shumlin appeared in a promotional video produced by Alex MacLean, his former chief of staff who went on to manage investor relations and projects at Jay Peak. In the video, which Stenger distributed to foreign investors, the governor promised that the projects were “audited.” Shumlin later said he “misspoke.”

During this period, regional center staff did not require the Jay Peak developers to submit quarterly reports as mandated under agreements with the state. Officials with the regional center later ignored complaints made by investors in the Tram Haus Lodge about Stenger and Quiros seizing ownership of the hotel without their knowledge or consent. In October 2014, VTDigger wrote about state officials’ cozy relationship with Stenger, the president of Jay Peak.

At that time, Sorrell said no more records would be disclosed to the public until after the state and federal litigation is completed. Sources have said it could be five years before the fraud cases are concluded.

Since then, federal officials have raised questions about state oversight of the EB-5 program.