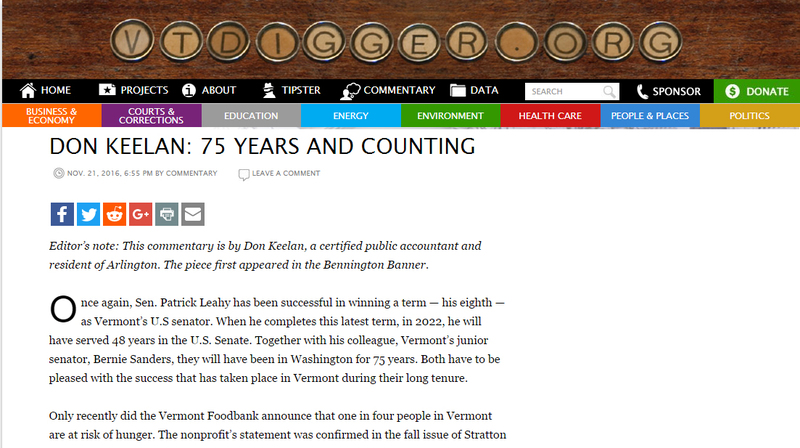 Once again, Sen. Patrick Leahy has been successful in winning a term — his eighth — as Vermont’s U.S senator. When he completes this latest term, in 2022, he will have served 48 years in the U.S. Senate. Together with his colleague, Vermont’s junior senator, Bernie Sanders, they will have been in Washington for 75 years. Both have to be pleased with the success that has taken place in Vermont during their long tenure.

Only recently did the Vermont Foodbank announce that one in four people in Vermont are at risk of hunger. The nonprofit’s statement was confirmed in the fall issue of Stratton Magazine which noted, “Consider: More than one-third of families in the state depend on food banks and school lunches as their main resource for meals for their children.” The senators’ goal is to see that 100 percent of Vermont schoolchildren will one day be receiving their breakfast and lunch, thanks to the Healthy Hunger Free Kids Act of 2010.

Sen. Sanders can now relish in the fact that, as the former chairman of the Senate’s Veterans Affairs Committee, his home state has dropped down from being 48th in the nation in its support for veterans to 47th – a remarkable achievement.

The state’s census is declining in two specific areas – those citizens between the ages of 18 and 34, as well as retirees.

Back home, Sens. Leahy and Sanders’ concern over world population growth is being addressed in Vermont. The state’s census is declining in two specific areas – those citizens between the ages of 18 and 34, as well as retirees. The latter group was the subject of a recent publication by Kiplinger Magazine, ranked Vermont No. 1 for least tax-friendly for retirees.

The Vermont senators must be pleased with the work of their state’s governor and health commissioner for taking on the FDA in Washington. Vermont Business Magazine reported in October, “The Governor (Shumlin) called F.D.A. approval of high-powered opiates the ‘the match that ignited America’s (and Vermont’s) opiate and heroin addiction crisis.’”

Sen. Leahy must be quite satisfied that he has accomplished more in cementing our country’s relations with China than has the Obama administration. While the State Department is wrestling with China on anti-dumping practices and China’s military base building in the South China Sea, Sen. Leahy has convinced thousands of Chinese investors to, individually, invest up to a half-million dollars in the U.S. EB-5 program. The fact that, in Vermont, hundreds of investors (many of whom are from China) were scammed out of their investments was not material to the program’s goals, for which the senator continues to cheerlead.

Encouraged by, and with personal support from, the national and state teachers union organizations, our two senators have been able to channel hundreds of millions of dollars to Vermont. The submarginal test scores, recently published by the state, have no bearing on their objectives. The fact that never has so much been spent to accomplish so little is of no concern to them as long as they can get the U.S. Department of Education to send dollars to Vermont. What really matters to Leahy and Sanders is continuing to meet their obligations to the NEA and VEA organizations.

Sens. Leahy and Sanders are indifferent with regard to the success that has occurred in Vermont during their four plus decades in Washington. Instead, what gives them psychic income is witnessing the result of their skills in bringing billions of dollars back to Vermont.

For many in Vermont, it is free money. Not really. In fact, it has been quite expensive. It has cost us our independence and relegated us to indentured supplicants. With a bit of good fortune, maybe Sens. Leahy and Sanders’ 75 years of combined representation can be extended to 100 years. Why would anyone wish otherwise?