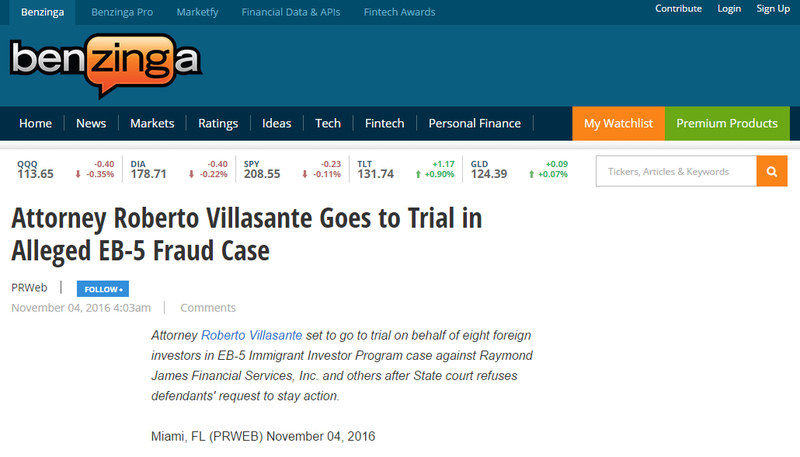 Attorney Roberto Villasante, founder of the Law Offices of Roberto Villasante, recently filed a complaint in the Circuit Court of the 11th Judicial Circuit in and for Miami-Dade County, FL (Complex Business Litigation Section, Case No. 16-17840) on behalf of eight foreign investors in an EB-5 Immigrant Investor Program. He also announced that any motion for leave to add additional parties must be filed no later than January 31, 2017.

The EB-5 Program provides a vehicle through which foreign investors can invest in certain types of qualified United States companies, earn a return on their investment, and ultimately obtain their permanent residency (green cards). To qualify for an EB-5 visa, a foreign applicant must invest $500,000, of which, according to court documents, all the plaintiffs in the case did in a Jay Peak Limited Partnership project, or $1 million in a new commercial enterprise approved by the U.S. Citizenship and Immigration Service. Once the applicant has invested, he or she may apply for a conditional green card, which is valid for two years. According to court documents, the Jay Peak project sold securities under the EB-5 Program to the plaintiffs.

Court documents also state that the defendants allegedly jointly conceived, planned, carried out, and otherwise effectuated their agreement through alleged overt acts, including, without limitation, commission of affirmative acts of fraud, theft, breach of fiduciary duty and other misconduct, all in furtherance of the unlawful agreement. As a direct and proximate result of the alleged conspiracy and effectuation of the illegal agreement, according to court documents, the plaintiffs have suffered damages, including but not limited to the loss of the monies they invested in the Jay Peak Limited Partnership, to-wit, $500,000 plus a $50,000 administrative fee. The investors also seek treble damages.

About Roberto Villasante, Law Offices of Roberto Villasante
Roberto Villasante has been an attorney in Florida for more than 30 years, dedicating the majority of his practice to the trial of complex civil disputes including in aviation, telecommunications, international business matters and products liability.