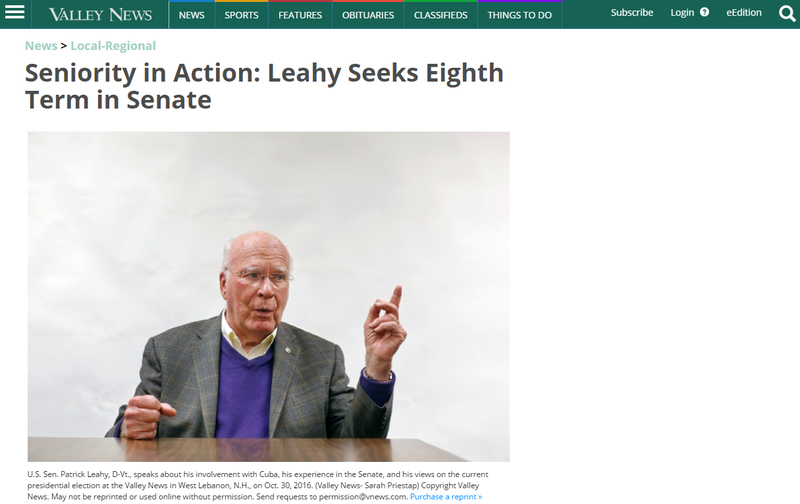 U.S. Sen. Patrick Leahy, D-Vt., speaks about his involvement with Cuba, his experience in the Senate, and his views on the current presidential election at the Valley News in West Lebanon, N.H., on Oct. 30, 2016.

Vermont Sen. Patrick Leahy said on Sunday that it was “irresponsible” for the FBI to announce 10 days before the election a review of additional emails possibly connected to Hillary Clinton, especially since no one knows what’s in them.

Leahy, who sits on the Senate Judiciary Committee, said he doesn’t understand why FBI Director James Comey alerted Congress to the emails, which agents came across during an unrelated investigation of former U.S. Rep. Anthony Weiner’s sexting scandal.

“I’ve known Jim Comey for years and I can’t understand what he’s doing,” Leahy said during an interview with the Valley News editorial board. “No FBI director — not since J. Edgar Hoover — would ever do something like this.”

Several former Justice Department officials have also taken issue with the announcement, saying it’s out of line so early into the review, when people don’t know what’s in the emails or how they’re related to Clinton.

In return, Comey has said he felt the move was necessary, since he previously told lawmakers the email investigation was finished.

“Anyone who’s ever been a prosecutor knows you never do this,” said Leahy, a former State’s Attorney in Chittenden County. “The director wanted to call me yesterday. I thought I would calm down a little bit.”

Leahy is vying for an eighth term representing Vermont in the Senate, and currently holds a comfortable lead in limited polling against Republican opponent Scott Milne, a North Pomfret resident who came close to unseating Gov. Peter Shumlin in 2014.

After 42 years on the job, Leahy said he doesn’t intend to slow down. He still spends his birthdays scuba diving and is an avid hiker and snowshoer.

When asked how old he’ll be by the end of this upcoming term, Leahy joked “103 but most people in my family live until 112.”

In reality, Leahy will be 82, but said his age doesn’t concern him.

“If it did, not only would I not run, but my wife, who’s a registered nurse, would not allow me to,” he said.

Leahy often cites his seniority in the Senate as a benefit for Vermont that enables him to attract federal grants and programs to the Green Mountain State.

But Milne characterizes the senator as part of a broken Washington system, one that takes special interest money and does little for the people back home.

Milne, who owns a travel agency, is calling for senators to serve no more than two terms and endorses restrictions on campaign spending.

“I believe Sen. Leahy’s bring home the bacon claims are not accurate,” Milne said in an email. “I will work hard with Sen. Sanders and all senators to make sure that Vermont is fairly represented.”

Also at issue this campaign season is spending. Milne has said he won’t accept money from political action committees and reported a campaign war chest of just over $74,000, compared to Leahy’s $4.6 million, according to VtDigger.

Leahy justified taking PAC money on Sunday by saying he didn’t initially know who he’d be running against. With tens of millions being spent in neighboring New Hampshire this election cycle, he didn’t want to risk being unprepared.

“I’ve had some heavily funded opponents over the years, I take nothing for granted,” he said.

Leahy said he’s running so that he can go back to Washington to forge bipartisan deals. He’s particularly worried about the current gridlock in confirming a ninth justice to the Supreme Court, which has operated with eight justices since the death of Antonin Scalia in February.

He said the president is constitutionally mandated to nominate judges, and the Senate is called on to advise and consent on those nominees. But since Republicans have refused to hold hearings on President Obama’s nomination of Merrick Garland, the system is at risk.

“That so politicizes the Supreme Court and the whole federal bench that while this may not be the number one issue that pops in peoples’ minds, it’s the issue that’s going to effect most of us Americans for decades to come,” he said.

Leahy said the clash over Supreme Court justices is symptomatic of American politics, but he’s the right person to work in a bipartisan way. He noted he would often work with the late Sen. Warren Rudman, R-NH, on legislation in a previous era.

“If (the Senate) doesn’t starting acting within it’s conscience, I think the sense of discouragement the American people feel will just continue to grow,” he said. “This is something I think about all the time.”

Leahy said he has a history of reaching across the aisle, including on immigration reform, where he worked with the bipartisan “Gang of Eight” on a bill that passed in the Senate but ultimately failed in the House.

It’s possible for similar bills to come forward, he said, but House leaders will need the courage to take them up.

“Let’s not have buyers regret again. Let’s do it,” he said of immigration reform.

While Leahy says he’s been able to bring lucrative federal dollars to Vermont, he acknowledges not all were wisely spent. He championed the EB-5 program, which allow foreign nationals residency in exchange for investing in development projects in rural areas.

The same program was used by developers for projects at Jay Peak and in Newport, Vt., and led to allegations that investors were defrauded of millions.

“I’m as angry as everybody is at what happened in the Northeast Kingdom,” Leahy said, adding that he’s called for changes to the EB-5 program over concerns that money sometimes is funneled to urban areas.

He’s also a strong proponent of expanding wireless access in Vermont. In 2010, the Rural Utilities Service of the U.S. Department of Agriculture awarded VTel with $116 million to construct a wireless system in rural Vermont. It was reported earlier this year that only 1,200 customers have signed up to date.

“We don’t run the operations. They’re run by various departments of the federal government. They have the expertise to supervise it and make decisions” said Leahy, who this year wrote a letter with Vermont’s congressional delegation inquiring about the program.

On foreign policy, Leahy’s not sure how to best address the Syrian Civil War, adding that the involvement of Russia on the side of the Syrian government complicates matters.

“I think (Syrian President Bashar al-Assad) should be charged with war crimes,” he said. “A no-fly zone becomes more difficult when you have the Russians putting some of their most sophisticated ground-to-air defenses (in the country).”

Leahy said he’s unlikely to support another major war in the Middle East, however, partially because of the possible cost and loss of life.

He said he supports gun control efforts to both expand background checks and limit the size of magazines for assault weapons. Leahy said the current system should be extended to gun shows and online sales.

“I wonder why people feel they must have a weapon that you normally see only on the fields of war,” he said.

He said Vermont already limits what hunters can carry during deer season.

“You ought to be able to do the same to give children in the school yard a chance,” he said.

The general election between Milne and Leahy will be settled on Nov. 8.