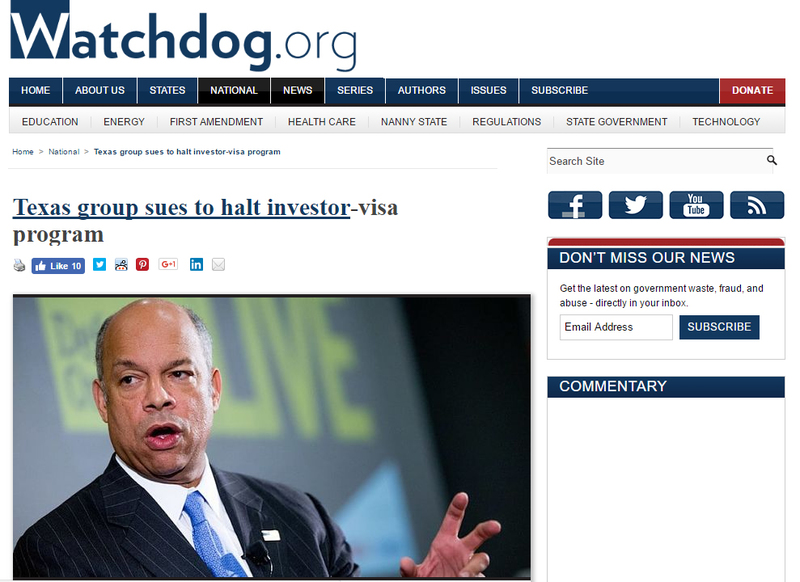 OUT OF BUSINESS? Jeh Johnson, secretary of the Department of Homeland Security, was named in a lawsuit that seeks to shut down America’s EB-5 investor-visa program.

A Texas group that sued the federal government over alleged misuse of investor visas is suing again to shut down the program altogether.

“The EB-5 immigrant investor pilot program ceased to exist on October 1. Absent congressional authorization, [the U.S. Department of Homeland Security and the U.S. Citizenship and Immigration Services] lack authority to continue [it],” stated the complaint filed in the U.S. District Court of the Northern District of Texas in Dallas.

The Congressional Research Service concluded that Congress did not fund the EB-5 when lawmakers passed a Continuing Resolution for government operations.

The Government Accountability Office, however, took the opposite position.

The GAO applied a U.S. Postal Service case as its precedent to conclude the Continuing Resolution should preserve the status quo of the Regional Center program continuing it “as is” to December.

“Unlike the Postal Service case, the EB-5 program had a clear sunset date. Thus, the status quo and prior legislative intent of Congress is a defined sunset date of Sept. 30, 2016,” Armstrong told Watchdog.org.

Urban Equality, which was not available to comment, previously accused federal officials of abusing the investor-visa program to fund a hotel project in Laredo.

Similar allegations were lodged against a Dallas project funded via EB-5 investment.

David North, a policy analyst at the Center for Immigration Studies, said, “No one really knows what will happen with this cloud hanging over the EB-5 program.”

“One of the complications is that EB-5 is financed by fees, whereas most of the rest of the government is funded by appropriated funds, the general subject of the Continuing Resolution. It is not clear that a funding bill can extend a program [without specific language] that is fee-supported as it can tax-funded activities,” he said.

North speculated that EB-5 projects already under way “will presumably move ahead, as these activities had been authorized, and funded, when the EB-5 program was clearly alive.”

A spokesman for DHS Secretary Jeh Johnson, named as chief defendant in the Urban Equality complaint, did not respond to Watchdog’s questions, citing the department’s no-comment policy on pending litigation.