After 20 years in office, one final ‘campaign’ for Miami mayor 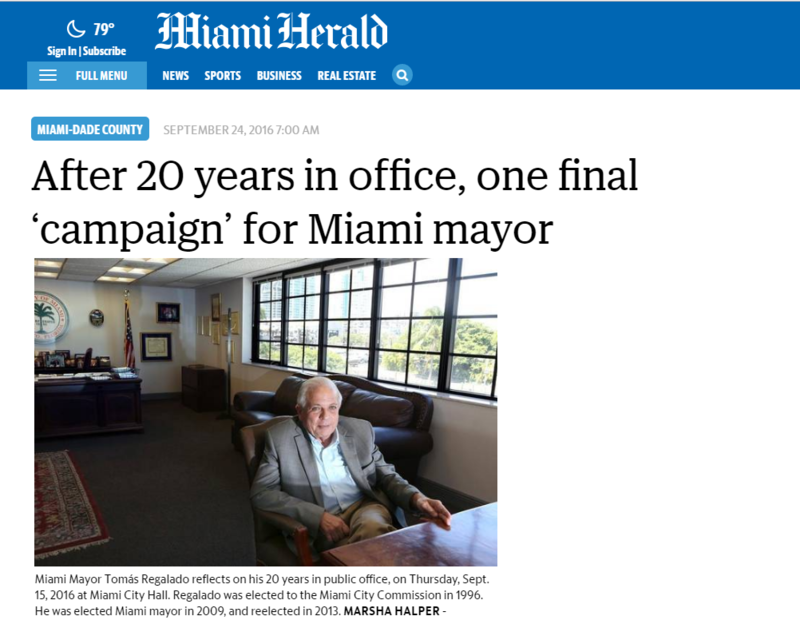 On his first day as a city of Miami commissioner, a middle-aged Spanish-language radio host with dark, gray-streaked hair was called into an impromptu meeting in the mayor’s second floor office to meet “some people” who wanted to speak to him.

The unexpected guests were FBI agents. Their message: Indictments were about to rock City Hall.

“I thought to myself, ‘What the hell? I just got sworn in,’” remembers Tomás Regalado — who promptly shared “rumors” of looming arrests that afternoon with his WCMQ audience.

And so, on Sept. 4, 1996, began the political career of a former journalist who rose to the height of power in Miami by intertwining populist politics and an intimate knowledge of the influence of mass media.

Since that day 20 years ago, Regalado has avoided the pitfalls of public life by taking calculated positions, dodging scandals and thriving on controversy. While a slew of seemingly slicker politicians have flamed out, he has endured thanks in part to thick skin and a lust for campaigning — a talent that sometimes outshines his knack for governance.

Now, after spending his first term as mayor putting out fires, and much of his second restoring the cuts he had to make in his first, Regalado is entering his final year in office with hopes of cementing his legacy. Critics say he has little to show for his two terms as the city’s chief official, but Regalado believes he’s accomplished most of what he set out to do, even if he has a few more goals to meet over the next 12 months. 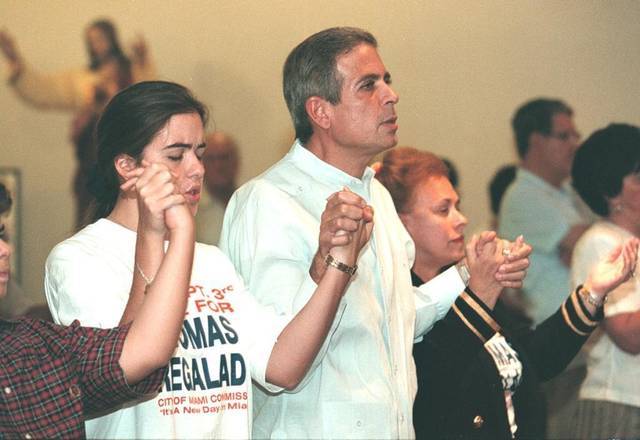 Miami City comission candidate Tomas Regalado was losing his race early on and went to the Ermita de la Caridad to say a prayer for victory in this Sept. 3, 1996, file photo. To his left is his daughter Raquelita. To his right, wife Raquel. Regalado went on to win the race.

“This is all that I wanted to do, here in the city of Miami,” said the 69-year-old Republican mayor.

Barring an implosion in 2017, Regalado will likely leave City Hall as Miami’s most popular mayor since Stephen P. Clark died of cancer in the summer of 1996. He doesn’t move as quickly as he used to, and jokes about the white, thinning hair on his head. But he remains a force on Spanish radio and is still frequently tapped to help campaign for city issues and friends.

HE’S GOT A GOOD RELATIONSHIP WITH THE PEOPLE. HE’S BEEN TALKING TO THEM FOR 40 YEARS.

“He’s got a good relationship with the people,” said Miami pollster and FIU professor Dario Moreno. “He’s been talking to them for 40 years.”

Some believe the mere threat that the popular Cuban mayor might campaign to keep his seat effectively killed a strong mayor initiative this summer after Regalado began questioning whether changing the city’s form of government would reset the term limits forcing him out of office next year. The main proponent of the proposal, Commissioner Francis Suarez, is campaigning for mayor.

“Scared the hell out of him, that’s what I think,” Regalado said, flashing a wide grin during an interview inside his office. 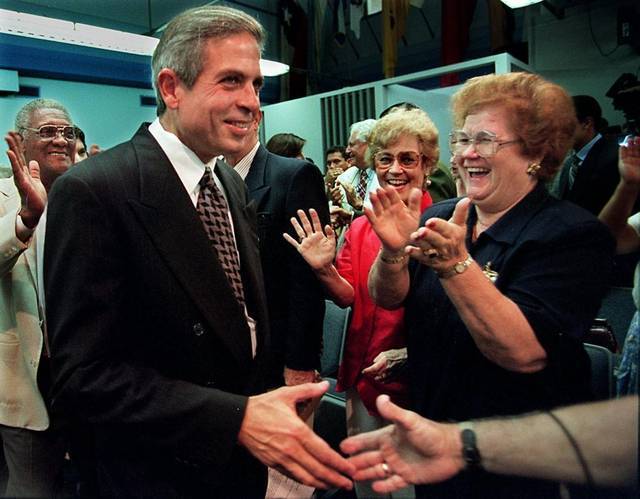 Tomas Regalado is greeted by well wishers at Miami City Hall Sept. 4, 1996, prior to his swearing in ceremony as Miami City Commissioner.

Regalado’s popularity has helped him pursue what might be his most personal mission over the next year: helping his daughter, campaign manager and first-ever chief of staff, School Board member Raquel Regalado, unseat Miami-Dade Mayor Carlos Gimenez. The elder Regalado — who prayed for victory with his daughter on the night of his first election when early results weren’t going in his favor — says her current race is the only one he can ever remember actually making him nervous.

The campaign has dragged the mayor into a series of political battles with Gimenez. Meanwhile, back on the homefront, he’s wrestled with an increasingly independent City Commission that in recent weeks has rejected his administration’s push to build a $100 million marina on Virginia Key and issue $275 million in tax-backed bonds. He also took some heat for entertaining a short-lived proposal to bring back pensions for elected officials.

IT’S BEEN A RIDE.

But even so, Miami is probably the calmest it’s ever been in Regalado’s political career. Since 1996, he’s had an inside view of the indictment of multiple commissioners, the suicide of another and the state’s overturning of election results. He’s also endured two investigations of the city by the Securities and Exchange Commission and two by the U.S. Department of Justice — each of which resolved their latest cases this year, the former by an unprecedented federal trial.

Regalado has dealt with his own turmoil, including more than $50,000 in federal tax liens while he was a commissioner. He was investigated early in his political career over allegations he abused a city gas card, and more recently for campaign finance violations. Regalado, who has never been accused of being meticulous, was cleared in both cases.

And most of it has been incredibly public. Regalado, a widower who boasts a net worth of less than $100,000, quietly remarried last year in a small ceremony with Ana Cristina Carrodeguas, a former Archdiocese employee. But otherwise his persona is intertwined with the media and politics. He is quick to take interviews and call-in programs, and rarely guards his tongue.

“When he became a politician, we always had to remind him he was no longer reporting the news, that he would become the news,” said Armando Gutierrez, a lobbyist and close friend of the mayor’s. “That was something that was hard for him to realize, that he was not supposed to be reporting everything.”

But regularly dishing and communicating info is part of how Regalado has governed and positioned himself advantageously. The longtime politician even refers to his work as “campaigning.” 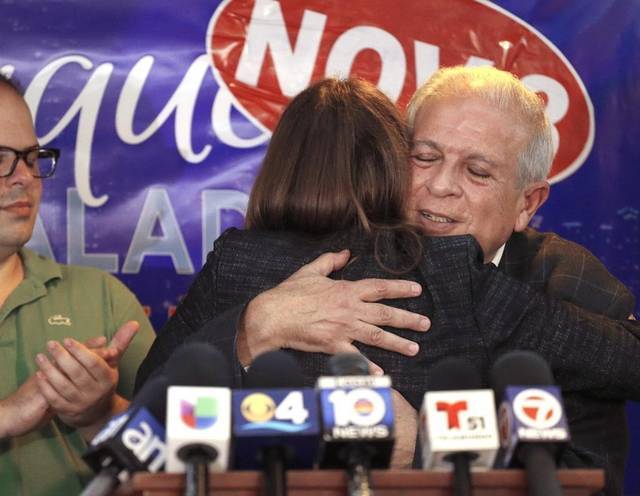 Tomas Regalado, right, hugs his daughter, Raquel Regalado, after she forced her way into a runoff election against County Mayor Carlos Gimenez on Tuesday, August 30, 2016 at Our Lady of Lebanon Church in Miami, Florida.

One story frequently told around City Hall involves a conversation more than a decade ago between Regalado and Joe Arriola, Miami’s then-city manager under former Mayor Manny Diaz. During that sit-down, Regalado explained to Arriola that he was going to be the administration’s “Chinese torture.”

“I’m going to drive you crazy one drop at a time,” Arriola remembers Regalado telling him in a message he took to be strictly about political posturing.

Regalado says he was actually expressing his intention to publicize Diaz’s increasingly problematic all-or-nothing style of governance, and his focus on turning Miami into the Manhattan of the south. Either way, outrage was strong at the time over the city’s role in a controversial fire fee settlement and the “global agreement,” which provided subsidies to Marlins Park without a voter referendum. Regalado’s positions against the Diaz administration helped him win the mayor’s election.

HE HAS THE STRONGEST POLITICAL INSTINCTS I’VE EVER SEEN, AND I’VE DEALT WITH GOVERNORS.

He campaigned on fighting over-development and backroom deals, with a motto of “Let’s take back our city,” which he says has resulted in a more open and transparent government. Ironically, he has since presided over the largest spike in real estate values ever seen in Miami, and fought allegations that his administration has tried to award lucrative contracts to his friends and without proper public input. Next year, Miami will also spend $2 million on public services to host the Major League Baseball All-Star game at Marlins Park, where Regalado says he sometimes attends ball games with his grandson, Sebastian.

Arriola gives him credit for picking Carolos Migoya, now president of Jackson Health System, to bail out the city after the recession. But he says at best, Regalado has coasted as mayor.

“It’s kind of like he kept the car in neutral and the car was already going downhill,” said Arriola. “That’s what his legacy is.”

“He is a man of the people, an honest man,” said Canton, who has become a sort of informal adviser to Regalado. “He has the strongest political instincts I’ve ever seen, and I’ve dealt with governors.”

Regalado said he’ll continue in his final year to pursue the city’s international business relationships and EB-5 regional center. He’s also making one last push to restore the historic Miami Marine Stadium, which he’s held up as a top priority since he was first elected mayor in the fall of 2009.

Regalado promised to keep his focus on the “little people,” including the diminishing pool of older Cubans who still refer to him as “Tomasito” from his days as a young radio host. He wouldn’t completely rule out another shot at elected office, but says he’s more than likely to return to the radio when his time as mayor is up.

Said Regalado: “I think that you should quit while you’re ahead.”