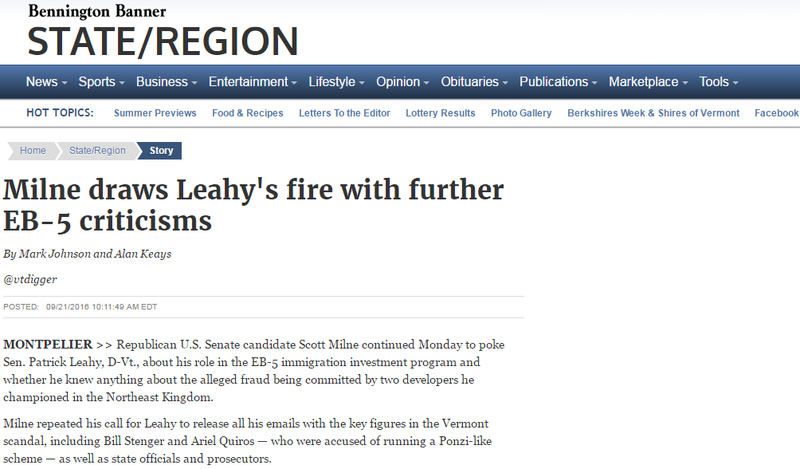 Republican U.S. Senate candidate Scott Milne continued Monday to poke Sen. Patrick Leahy, D-Vt., about his role in the EB-5 immigration investment program and whether he knew anything about the alleged fraud being committed by two developers he championed in the Northeast Kingdom.

Milne repeated his call for Leahy to release all his emails with the key figures in the Vermont scandal, including Bill Stenger and Ariel Quiros — who were accused of running a Ponzi-like scheme — as well as state officials and prosecutors.

Milne also requested Leahy provide all correspondence with figures in the motion picture industry who used the EB-5 program to finance Hollywood films. Leahy's daughter, Alicia Leahy Jackson, is a lobbyist for the Motion Picture Association of America.

In particular, Milne wanted to know about Leahy's role supporting the promotion of an EB-5 official who was under investigation for allegedly not providing enough oversight of the Hollywood program. Milne also said he wanted to know about all of Leahy's campaign donations from the industry, which he said profited greatly using the investment program.

The EB-5 program allows foreigners to put up $500,000 in a qualified investment and in return they can get permanent residency in the United States.

Leahy has refused several calls by Milne to make public his emails, claiming it would violate the privacy of those who correspond with him. The seven-term senator fought back hard against Milne's allegations and accused the Pomfret Republican of not standing for anything.

Milne said Monday at a hastily arranged news conference that Leahy was engaged in hypocrisy. Milne made his charges at Burlington High School — where Leahy already had a news conference scheduled on college funding — behind a makeshift podium he bought on the way over.

"I see a chasm that separates my opponent's walk from his talk," Milne said. "Sen. Leahy portrays himself as the 'Godfather' of EB-5 in America. He also claims he is 'Senator Sunshine' for his alleged commitment to transparency. And yet, he refuses to be transparent when it comes to why and how so many of his fingerprints have ended up all over the EB-5 mess that stretches across the globe — from Hollywood, to China, to the Kingdom."

If elected, Milne said he would support extending the Freedom of Information Act to the U.S. Senate and expanding the ban on lobbyists who are immediate family members of a senator. Currently, those lobbyists can petition senators except for their relative and staff.

Milne challenged Leahy's claim that he didn't know about the status of the Northeast Kingdom investigation until the charges were levied in April. Milne also questioned whether it was "a coincidence" Leahy had held a hearing on reforms to the EB-5 program the day before the charges against Quiros and Stenger were made public.

At the news conference on college funding, Leahy shot back at Milne's allegations about the EB-5 program, including questions Milne raised about campaign contributions Leahy received from motion picture companies.

"If he is accusing me of doing something, he should call the U.S. attorney's office," Leahy said. "I am tired of him. He doesn't want to say anything to my face even when I see him. He only talks to you guys. He makes baseless charges. I want prosecution of the people who did things wrong. I'm the only one who's running who has called for prosecution."

Milne also raised questions about Leahy's support for Alejandro Mayorkas, the former director of U.S. Citizenship and Immigration Services, who was accused of putting pressure on federal officials to approve EB-5 Hollywood projects.

Mayorkas has been a key EB-5 ally to Leahy, including when he allowed the Vermont senator's interpretation of the EB-5 job requirements to include out-of-state, indirect jobs — a finding that benefited the Jay Peak developers.

Leahy, in turn, has been a supporter of Mayorkas.

In 2013, when Mayorkas was nominated to the post of deputy secretary of homeland security, Leahy rebuffed Republicans who pointed to a report by the inspector general on the Los Angeles Film Center as a troubling sign. In a statement at the time, Leahy said that "this flawed investigation does not merit the delay of Director Mayorkas' confirmation process."

In the end, Mayorkas was confirmed to the post, a position he still holds.

Milne said he supported the EB-5 program in general. Leahy said he wanted to see Milne's correspondence as well.

"Mr. Milne has not come out with a position of his own on anything," he said. "For example, we haven't seen the documents when he and Gov. Douglas went to, traveling all over Asia on EB-5."

Leahy added: "You can't just attack people. You've got to stand for something. I've shown what I stand for, right here."

Milne said public records about his trips with Douglas are at the state archives in Middlesex and that he has requested Gov. Peter Shumlin release any EB-5 correspondence that involved Milne.

Milne said he was happy to comply and was "pleased that Sen. Leahy seems to realize that there is a real need for transparency.