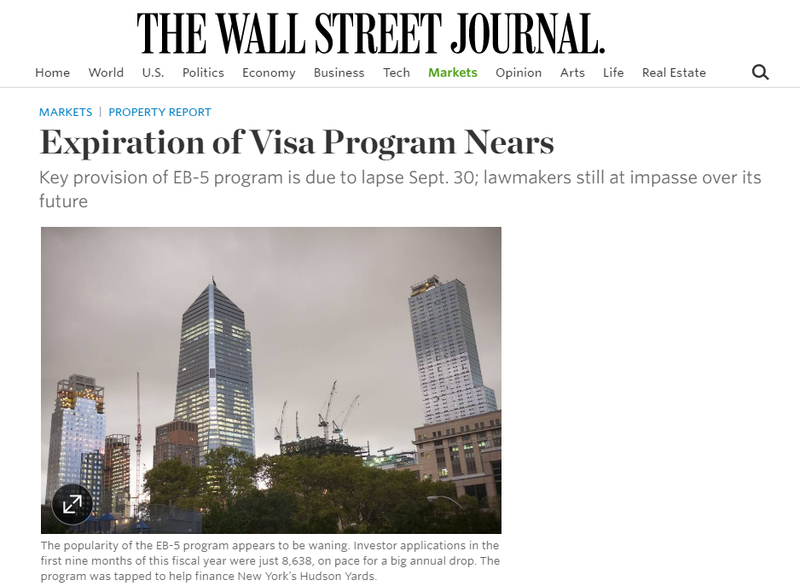 A key provision of the EB-5 program, which gives permanent U.S. residency to foreigners who invest at least $500,000 in certain businesses, is due to lapse Sept. 30, although Congress on Tuesday appeared to be ready to give it a short-term extension until after the presidential election.

The program has surged in popularity in recent years among real-estate developers who have tapped it to help finance some of the most high-profile projects in the U.S., including the giant Hudson Yards development rising on the west side of Manhattan. The main draw is the low-cost loans provided by the foreign investors—who are mostly from China—which can save the developers tens of millions to hundreds of millions of dollars in borrowing costs.

But the program has drawn criticism. Allegations of fraud have marred numerous projects that have left investors with neither their money nor a visa amid loose regulations, including a high-profile Vermont ski resort. In addition, the program has become dominated by high-end developments in prosperous urban neighborhoods that are using a piece of the program meant for rural and high-unemployment neighborhoods. This practice, known as gerrymandering because the developers draw special districts that link their projects with high-unemployment neighborhoods that are sometimes miles away, has made it harder to raise money in economically struggling areas, EB-5 professionals say.

Congressional lawmakers have reached an accord on measures to limit fraud. But for the past year, the urban developers and their allies in congress, mainly Sen. Charles Schumer (D., N.Y.) and Sen. John Cornyn (R., Texas), have beat back attempts to redefine the benefit so many of the high-end skyscrapers can’t qualify.

Mr. Schumer has said the investments create jobs throughout cities, suggesting there was no need to distinguish between poor Bronx neighborhoods and Midtown Manhattan. Other key lawmakers, including the Democratic and Republican leaders of the Judiciary committees in both the Senate and the House, disagree and have been holding out in an attempt to block the urban developers from dominating the program.

A bill introduced in the House of Representatives earlier this month would have reserved 4,000 of the 10,000 EB-5 visas awarded annually for projects in rural and low-income census tracts.

“The facts make it clear that this program is in desperate need of statutory and regulatory reform,” Rep. Bob Goodlatte (R., Va.) said in a statement announcing the bill.

Many developers are pushing for fewer restrictions, and any compromise still seems far off.

Multiple other ideas to bridge the gap have been floated, but few have gained traction. Among them, proposals include increasing the number of visas, restricting the benefit for rural and high-unemployment areas to only areas suffering from very high poverty.

The slowdown has been attributed to a number of factors including the uncertainty over renewal as well as the yearslong waiting list that has formed for the program, which reached its 10,000 visa capacity for the first time in 2014.

On top of that, a slowdown in the Chinese economy and a government crackdown on moving money out of China have hurt demand, said Nicholas Mastroianni II, chief executive of the U.S. Immigration Fund, one of the larger companies that works with developers to secure EB-5 investors.

“It’s a combination of the unpredictability” and economic factors, he said. ‘We see a softening in the market.”