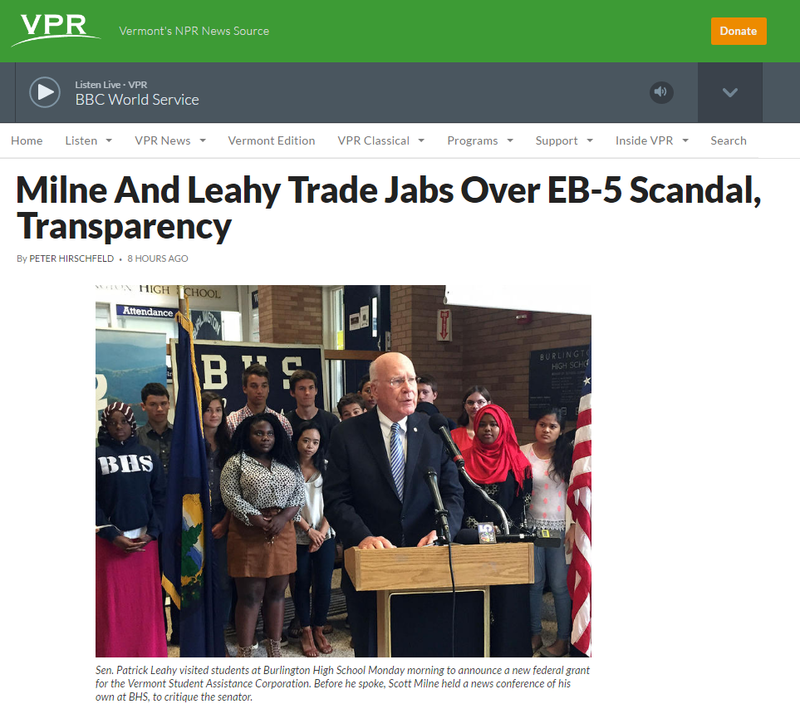 Republican candidate for U.S. Senate Scott Milne is renewing his call on Patrick Leahy to release Senate records related to the alleged EB-5 scandals in Jay Peak. Leahy, meanwhile, says he’s growing tired of his opponent’s tactics, and that it’s becoming evident that Milne lacks the grasp of policy needed to be an effective member of Congress.

The timing and location of Milne’s news conference Monday morning was no accident. Milne invited reporters to join him outside Burlington High School at 9:30 a.m., a half hour before Leahy, the incumbent Democrat, would arrive there for a news event of his own.

With the well-manicured BHS football field as his backdrop, Milne began with what has become a stock line in his recent campaign appearances.

“I see a chasm that separates my opponent’s walk from his talk,” Milne said.

In this instance, the criticism is related to an EB-5 immigrant investor program that has come under a national microscope after a series of alleged frauds in the Northeast Kingdom.

Milne says Leahy has extolled the virtues of government transparency.

"And yet he refuses to be transparent when it comes to why and how so many of his fingerprints have ended up all over the EB-5 mess,” Milne says.

Specifically, Milne wants Leahy to voluntarily disclose internal correspondences by him or his staff related to controversial EB-5 projects in Vermont and elsewhere. U.S. senators are exempt from the federal Freedom of Information Act.

Milne first walked this line of attack in May, shortly after the federal Securities and Exchange Commission announced charges against Ariel Quiros and Bill Stenger, the two men accused of perpetrating a massive EB-5 fraud. Leahy was among the highest-profile boosters for the projects, which federal investigators say turned out to be a Ponzi-like scheme to defraud foreign investors.

"He refuses to be transparent when it comes to why and how so many of his fingerprints have ended up all over the EB-5 mess." - Scott Milne

Milne says his net has widened. And he says Leahy’s close ties with a movie industry that has sought to use the EB-5 program to bankroll studio projects now elevate the need for public scrutiny.

“Taken together, these facts raise legitimate questions about Pat Leahy’s interest in EB-5,” Milne says. “How that interest developed and affected his official acts is a question I’m asking today.”

A throng of students assembled in the Burlington High School lobby offered a more ceremonious reception for their guest of honor Monday morning. Leahy had come to announce receipt of a new federal grant for the Vermont Student Assistance Corporation.

Asked about Milne’s latest volley after the event, Leahy made little attempt to veil his contempt.

“I am tired of him,” Leahy said. “He doesn’t want to say anything to my face, even when I see him. He only talks to you guys. He makes baseless charges.”

Leahy says it’s inappropriate for Milne to intimate that he’s guilty of some impropriety.

“If he is accusing me of doing something wrong, he should call the U.S. Attorney’s office,” Leahy says. 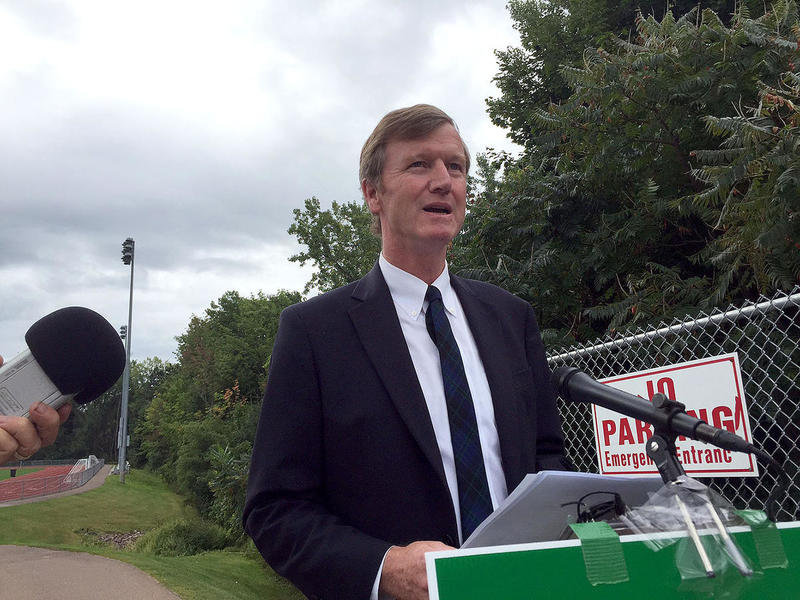 Republican candidate for U.S. Senate Scott Milne held a press conference Monday outside Burlington High School, where he called on Sen. Patrick Leahy to make public all records related to EB-5 projects in the Northeast Kingdom.

As for voluntarily releasing records related to his office’s work on EB-5 projects, Leahy deflected.

“Is he going to release the stories about his trips with Jim Douglas on EB-5? Is he? Has he?” Leahy said.

Leahy is referencing a trip Milne took to China and Korea with then-Gov. Jim Douglas in 2009, who was traveling to tout the rigors of state oversight of the EB-5 program.

Milne at the time was, according to Seven Days, considering using the EB-5 program for his own development project in southern Vermont. Milne, who has never held public office before, later decided against it.

Milne’s campaign says there’s a big difference between the two situations: Milne wasn’t an elected officeholder at the time of his trip. Anyway, the campaign says it encourages the Shumlin administration to release any government records related to Milne and the EB-5 program.

“You can’t just attack people,” Leahy says. “You’ve got to stand for something.”

"Is he going to release the stories about his trips with Jim Douglas on EB-5? Is he? Has he?" - Sen. Patrick Leahy

Milne, however, makes no bones about the thrust of his campaign. He says he won’t have any polished policy papers, or in-depth proposals for legislation.

“And I’m running on a platform of getting career politicians who are getting propped up by special interest money, like my opponent, out of the way,” Milne says.

One specific proposal Milne says voters can count on if he’s elected: He’ll introduce legislation subjecting members of Congress to the Freedom of Information Act from which they’re now exempt.

Milne says a story last week by VTDigger’s Jasper Craven further call into question the appropriateness of Leahy’s role in the EB-5 program.

Craven’s story details a 2015 report by the Inspector General at the Department of Homeland Security, which found that Alejandro Mayorkas, the former director of the United States Citizenship and Immigration Services, had put undue pressure on federal employees to approve EB-5 proposals submitted by Hollywood studios, including Sony Pictures and Time Warner.

Leahy has accepted tens of thousands of dollars in campaign contributions from Sony and Time Warner, and his daughter now works as a lobbyist for the Motion Picture Association of America.

Leahy also received campaign contributions from the director of the Los Angeles-based EB-5 promotional center that was trying to secure federal approval for the movie projects scrutinized in the Inspector General’s report.