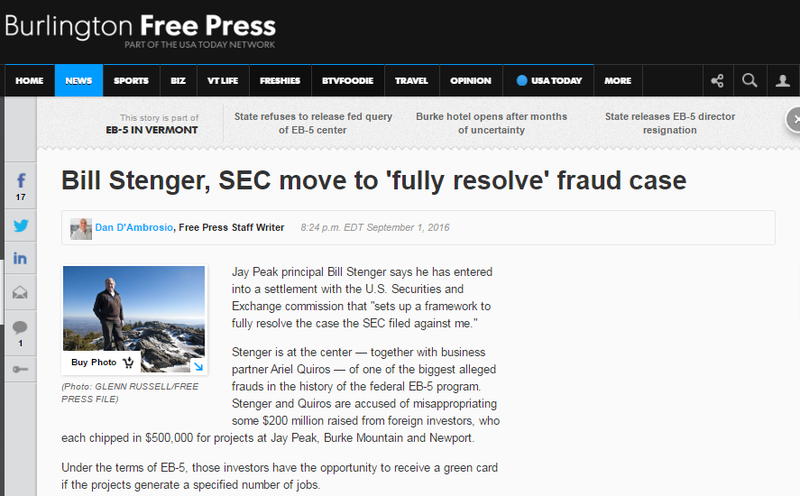 Jay Peak principal Bill Stenger says he has entered into a settlement with the U.S. Securities and Exchange commission that "sets up a framework to fully resolve the case the SEC filed against me."

Stenger is at the center — together with business partner Ariel Quiros — of one of the biggest alleged frauds in the history of the federal EB-5 program. Stenger and Quiros are accused of misappropriating some $200 million raised from foreign investors, who each chipped in $500,000 for projects at Jay Peak, Burke Mountain and Newport.

Under the terms of EB-5, those investors have the opportunity to receive a green card if the projects generate a specified number of jobs.

The SEC detailed the settlement in a lengthy court filing Thursday in federal court in Miami, where the civil case is proceeding against Quiros, a Miami resident, and Stenger.

In the settlement, Stenger agrees to make himself available for interviews by the SEC.

The agreement with the commission bars Stenger from ever again being involved in an EB-5 project, and leaves him open to civil penalties that might be imposed by the Miami court that is hearing the fraud case. Stenger is prohibited from arguing in court that he did not violate federal securities laws if the SEC pursues civil penalties against him.

Also, Stenger agreed to make no public statement denying the allegations, or even to allow others to make such a statement.

U.S. Attorney for Vermont Eric Miller said in April that he is investigating the possibility of bringing criminal charges against Stenger and Quiros.

"The Consent resolves only the claims asserted against Stenger in this civil proceeding," government lawyers wrote in the court filing Thursday.

"Stenger acknowledges that no promise or representation has been made ... with regard to any criminal liability that may have arisen or may arise from the facts underlying this action or immunity from any such criminal liability."

In an emailed statement Thursday evening, Stenger said he has neither admitted nor denied the allegations brought by the SEC. He said he has been fully cooperating with the federal receiver who took control in April of Jay Peak and other properties in the Northeast Kingdom.

The receiver, Michael Goldberg, did not immediately return phone and email messages seeking comment on Stenger's revelation. Goldberg previously told the Burlington Free Press that Stenger was on his payroll, making less than $100,000 annually, and was providing valuable knowledge and insight into the businesses he formerly ran.

Although Stenger is permanently prohibited from involvement in EB-5 projects, he is explicitly allowed to continue to work with Goldberg.

"Based on the terms of the settlement, this is all I can say and will be saying," Stenger concluded in his Thursday email. "I ask that you please respect that I will not be making any more public statements about the settlement nor about the case."

Stenger said he wanted to focus his efforts "fully" to help Goldberg and the investors.