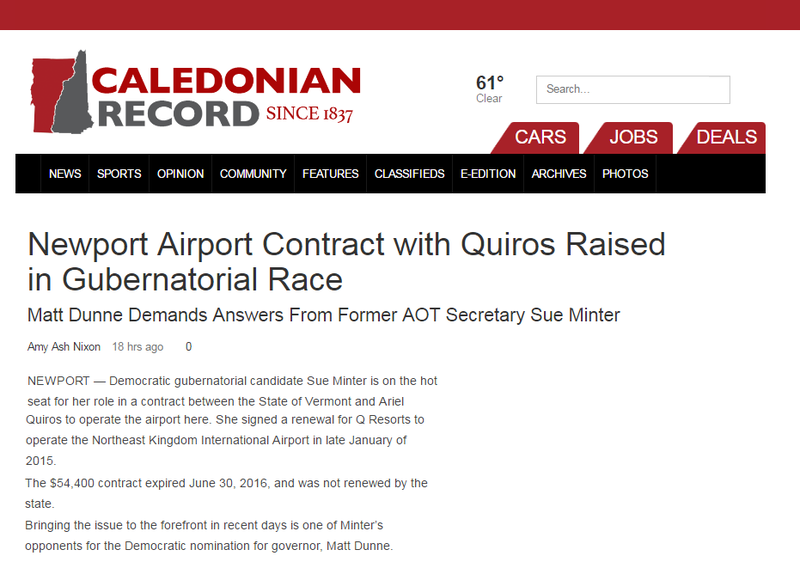 Democratic gubernatorial candidate Sue Minter is on the hot seat for her role in a contract between the State of Vermont and Ariel Quiros to operate the airport here. She signed a renewal for Q Resorts to operate the Northeast Kingdom International Airport in late January of 2015.

Bringing the issue to the forefront in recent days is one of Minter’s opponents for the Democratic nomination for governor, Matt Dunne.

Dunne fired off a letter to Minter, stating his campaign had received “the sole sourced contract executed between the State of Vermont and Ariel Quiros to operate the Newport State Airport, a contract you signed as Secretary of Transportation.”

Dunne states that he and Minter both have urged for transparency and release of state communications related to the meltdown of the Northeast Kingdom Economic Development Initiative which Quiros was the mastermind of, as well as principal owner in seven partnerships at Jay Peak and Burke Mountain.

“This contract was signed well after the administration had raised concerns internally, after related projects had been shut down, and after experienced businesspeople like Tony Pomerleau had walked away from deals with these individuals,” asserts Dunne. “I am not an expert on state airport contracts, and given that fact, and in the name of transparency, I’m hopeful you can provide further information,” in response to questions, he wrote.

Among Dunne’s questions posed to Minter in the letter include whether she was aware of the Shumlin administration’s concerns about the EB-5 projects in the Northeast Kingdom when she signed the contract.

More than $350 million was raised in EB-5 investments by Quiros and Stenger for their economic development empire; EB-5 allows immigrant investors to obtain green cards in exchange for investments in projects which create jobs in designated regions. The EB-5 investment per individual in the Quiros-Stenger projects was a half-million dollars per investor.

Dunne asks Minter, “Why did you believe it was appropriate to sign a state contract with Ariel Quiros after concerns had been raised about his business practices?” He also asks, “Why was Q-Resorts deemed the only vendor capable of providing the necessary services at the state airport in Newport?”

He presses her for why other vendors, including those who operate the airports in Burlington and Rutland, were not sought out in a public bid.

Another Democratic contender for governor in Vermont, Peter Galbraith, through a spokesman, said he has been calling for a vetting of the state government’s oversight of the EB-5 projects since April when the SEC investigation became public. But, he said, the investigation shouldn’t be political. He proposed the chief justice of the Vermont Supreme Court appoint a commission “to keep the investigation free of politics and political influence … This is the appropriate way to investigate the airport contract between the state and Quiros.”

The state signed the original deal with Quiros the same day that Stenger and Quiros announced the NEK Economic development initiative Sept. 27, 2012.

Minter on Monday in an emailed statement, said, “I am proud of my record at the Agency of Transportation helping Vermont rebuild after the worst natural disaster in a century, updating our infrastructure, and making our roads and bridges safer for Vermonters. I am sorry to see my opponent resort to this kind of baseless, negative politics. This is not how we operate in Vermont.”

“Matt is fully aware that this project was NOT an EB-5 project. Matt also knows that this was a contract that was negotiated under my predecessor, and reflects best-practice airport maintenance,” stated Minter.

Q Resorts was expanding the airport with non-EB-5 funds, said Cole. “That was our understanding, and that is what they communicated to us. I will indicate that in the last year, Bill Stenger had indicated…it ended up in the press, that he was planning on funding a portion of the airport activities with EB-5 funds, and we were not pleased by that…but by that time we were not getting return phone calls from them.”

He explained why traditional bidding does not occur with those contracts, and did not in the case of the Newport airport.

Cole said, “We have ten state airports and our agreement with operators outlines a certain set of duties and standards that they have to adhere to.”

Those operators “have to make a lot of investments to grow their business, and if you put these out to bid every two to four years, you would not be able to recruit someone to operate these airports,” said Cole. “It wouldn’t be a good business decision, it’s sort of a public-private partnership in how we run our air fields. We want to use the infrastructure to grow businesses in the private sector.”

Lakeview Aviation had the contract in Newport with VTrans for a decade, and became a subcontractor under Q Resorts when the expansion plans got underway; Lakeview was granted the fixed base operator contract with VTrans again recently, after three contractors were invited to bid, said Cole.

In 2012, Cole said, “Q Resorts signed a lease with the state for a variety of projects and wanted to be the fixed base operator at the airport in Newport.”