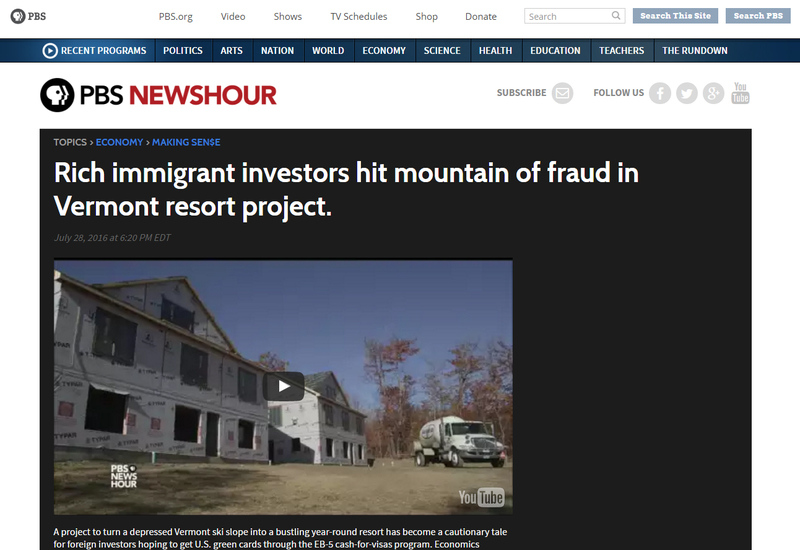 A project to turn a depressed Vermont ski slope into a bustling year-round resort has become a cautionary tale for foreign investors hoping to get U.S. green cards through the EB-5 cash-for-visas program. Economics correspondent Paul Solman reports on charges of massive fraud filed by the SEC against the developers of Jay Peak, who allegedly misused $200 million in investments.

HARI SREENIVASAN: Now an update to a story we first reported last year about an economic development project that promised to bring jobs to rural Vermont and green cards to foreign investors.

Now it’s at the center of federal fraud allegations.

PAUL SOLMAN: Just four miles from the Canadian border, surf’s up, however improbably, or was up at the Jay Peak Resort, when we visited last fall.

The resort is part of a half-billion dollar development project designed to transform the economically depressed Northeast Kingdom, as this corner of Vermont is called, with foreign investment. The developer, Bill Stenger.

BILL STENGER, CEO, Jay Peak Resort: In the last seven years, we have constructed three different hotels, a beautiful indoor water park, ice arena, conference center, wedding facility. And we have had a tremendous impact on our local economy regionally as well.

PAUL SOLMAN: A local economy that, for most of Vermont’s history, has been at the very bottom, but was suddenly leading the state in job creation.

So the story seemed to be win-win-win, Northeast Kingdom wins, tourists win, and so do the foreign investors, not only with a promised return on their investment, but — and here’s the novel incentive of the so-called EB-5 visa program — with green cards, permanent resident visas for the investors and their families, in exchange for forking over $500,000 to private companies to create at least 10 jobs in areas of deep unemployment.

Do you think it is fair that rich people get to come to the United States, when there are so many truly desperate emigres from a place like Syria, say, out there on the water as we speak?

BILL STENGER: I’m seeking capital from a legal source that’s been in existence since 1990 that is promoted by our government, helps us.

PAUL SOLMAN: Well, they certainly seem to be improving life in and around Jay Peak.

Before the EB-5-funded renovation and expansion began in 2008, this was a ski slope going downhill. When we visited last year, it was a year-round resort attracting a million customers annually to its rides, rinks, restaurants.

MAN: To do something like this for this area is immense. It’s priceless.

MAN: It gives me an opportunity where I can become a supervisor. I can keep moving up.

PAUL SOLMAN: Growth that even benefited the local quilting bee, whose membership has quadrupled in their new digs.

Helen Short is a nurse from nearby Enosburg Falls.

HELEN SHORT, Nurse: I voluntarily went up and spoke to Bill Stenger because I wanted to thank him. A lot of the farms were going out of business. There wasn’t much opportunity for the youth in this area. And now you have come here, and it’s like this big enterprise and there is building and construction going on, and students are employed in high school.

PAUL SOLMAN: As lifeguards, ski patrols, desk clerks. No wonder that in neighboring Newport, Bill Stenger was celebrated as man of the year, if not the millennium.

Newport was where Stenger and his partner, Ariel Quiros, had half-a-dozen new EB-5 projects pending, most ambitiously, some said delusionally, a stem cell manufacturing facility affiliated with a South Korean biotech firm.

ARIEL QUIROS, Chairman: We also will co-develop and manufacture various kinds of artificial organs, such as artificial kidney, heart and liver.

PAUL SOLMAN: Skeptical yet? Back in December, investors like Tony Sutton in England were complaining they had been scammed, and gotten no return at all on their investment.

TONY SUTTON, Jay Peak Resort EB-5 Investor: They gave us all IOUs. And if you look at the company that the IOUs are drawn against, our research suggests that that company has no assets, no income and no way of servicing the IOUs for any of the investors.

PAUL SOLMAN: So, you don’t think you will ever get your capital back?

TONY SUTTON: No, not from Jay Peak.

PAUL SOLMAN: Meanwhile, developer Stenger was all innocence, claiming to be stung by any suspicions.

BILL STENGER: Hundreds of families are relying on me and my team to implement what we do, and do it right.

PAUL SOLMAN: Look, relying on him, they were. But the reason for this update is that, in April, the Securities and Exchange Commission charged Bill Stenger and Ariel Quiros with 52 counts of federal securities violations, alleging they’d misused more than $200 million in investor funds, of $350 million total, and that Quiros had personally stolen over $55 million to buy, among other things, a $4 million condo on New York’s Fifth Avenue, and a $2.5 million crib on the Hudson River.

The state and FBI are also investigating for criminal violations.

So, it turned out to be even worse than you thought?

PAUL SOLMAN: Investigative reporter Anne Galloway has been covering Jay Peak, and uncovering questionable practices there, for years. But even she is shocked by the extent of the alleged fraud.

ANNE GALLOWAY: It took me a while to wrap my head around it, the scale of it.

PAUL SOLMAN: It was a Byzantine scheme, says the SEC. Instead of using EB-5 funds as required by law, Stenger and Quiros wove a tangled web of diversion and deception.

PAUL SOLMAN: Quiros is fighting the charges. Stenger, who declined our request for an interview, is trying to settle with the SEC and keep the boat afloat.

ANNE GALLOWAY: He goes in every day, under the supervision of the receiver, Michael Goldberg, to keep the resort operating smoothly.

PAUL SOLMAN: Galloway quotes Goldberg saying that, unlike Quiros, Stenger did not siphon personal funds from the fraud.

And the receiver is working on behalf of the people who’ve lost their money to try to recover as much of it as possible?

ANNE GALLOWAY: That’s right. But keeping it open is a challenge. And they have 700 investors who have been hurt by this, and that’s a very tough problem to solve.

PAUL SOLMAN: Some investors, like Tony Sutton, who put his money in the fully built Tram Haus Lodge, at least got their green cards. But more than half did not, and probably never will, because their unfinished projects will not have created the necessary 10 jobs per investor.

And of the 400 or so investors who may never get permanent green cards, how many will get their money back?

ANNE GALLOWAY: At this point, it’s not clear that any of them are going to get all of their money back.

PAUL SOLMAN: And, thus, the largest EB-5 project in Vermont may become the largest fraud in Vermont’s and EB-5’s history, and a key prompt to reform America’s cash-for-visas program.