Grenada promises to cooperate after US charges Chinese investors with fraud 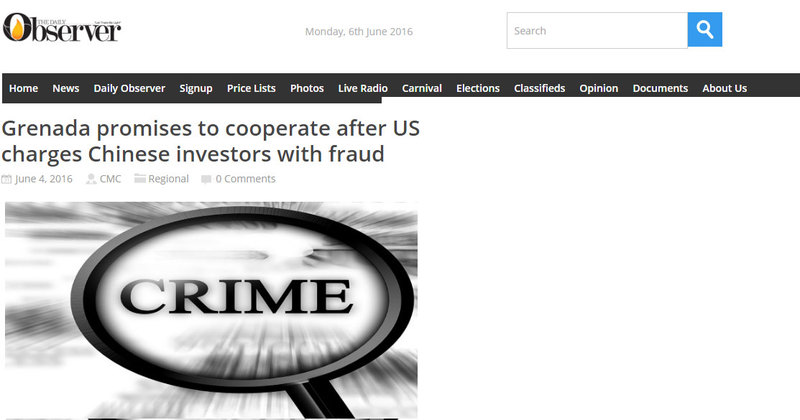 The Grenada government says it will cooperate with United States authorities after they laid fraud charges and frozen the assets of a Grenadian investor and his wife, accusing them of misusing two-thirds of the money they raised from investors for the purpose of building and operating a new cancer treatment center.

“Through our diplomatic channels, the Government of Grenada continues to monitor the situation, to communicate with all diplomatic and other sources, and continues to fully engage mutual cooperation with all the parties concerned,” the Keith Mitchell government said in a statement.

“The Government of Grenada stands ready to take the appropriate action as the facts are ascertained,” the statement added.

The United States Securities and Exchange Commission (SEC) said it had aid the charges against Charles Liu, who acquired Grenadian citizenship under island’s Citizen By Investment Programme (CIP), last September, and is linked to a multi-million dollar tourism project in Mt. Hartman in Grenada.

According to the SEC’s complaint unsealed earlier this week in US federal court in Los Angeles, Charles C. Liu and his wife, Xin “Lisa” Wang, raised US$27 million for the proton therapy cancer treatment center from 50 investors in China through the EB-5 immigrant investor programme.

They said in promotional materials that the project would create more than 4,500 new jobs and have a substantial impact on the local economy while giving foreign investors an opportunity for future US residency, the SEC claimed.

“But presently there is no construction at the proposed site after more than 18 months of collecting investments,” the SEC said.

Meanwhile, it charged that Liu has transferred US$1 million in investor funds to three firms in China and diverted another US$7 million to his and his wife’s personal accounts.

In granting the SEC’s request to freeze the assets and accounts of Liu, Wang, and related entities, the court’s order prohibits them from raising further money from investors or spending remaining funds.

“We allege that Liu and Wang are using investor funds as their personal piggy bank and exploiting Chinese residents who were assured they were investing in an innovative project to create jobs and cure cancer patients,” said Michele Layne, director of the SEC’s Los Angeles Regional Office.

According to the SEC’s complaint, one of the websites Liu and Wang have used to promote investments in the cancer center project includes a section entitled “Government Support,” with photos of former US President George Herbert Walker Bush and former California Governor Arnold Schwarzenegger.

The SEC said their photos are accompanied by what appear to be letters they wrote in support of proton therapy in general “rather than the depicted EB-5 project, which had not even been initiated at the time the letters were written.”

The SEC said that it seeks preliminary and permanent injunctions, as well as the “disgorgement of ill-gotten gains, plus interest and penalties.”