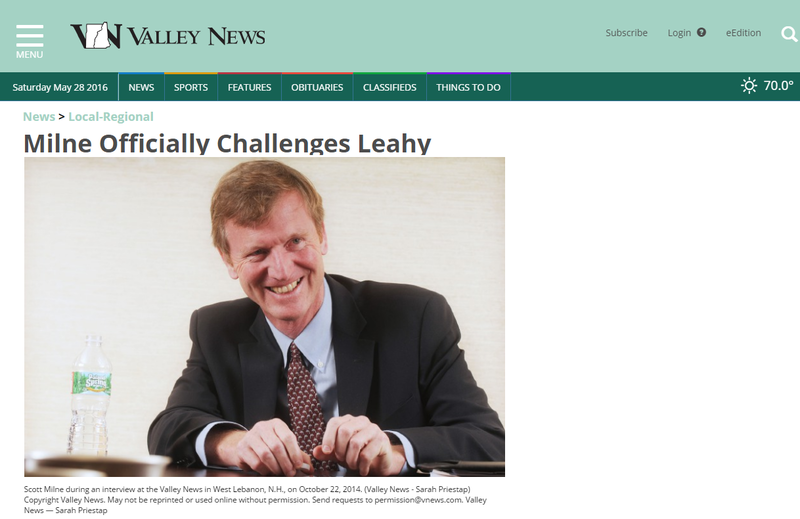 Republican Scott Milne, of Pomfret, a relative newcomer to politics who narrowly lost the last governor’s race, officially declared his bid to unseat U.S. Sen. Patrick Leahy on Thursday, submitting the required signatures to be on the November ballot.

“Leahy’s a $6 million special interest candidate. I don’t think that’s what Vermonters want,” Milne said in an interview outside the Secretary of State’s Office when he turned in his paperwork. “I think we want someone who can prove by example that we can get money out of politics, and I think people are fed up with career politicians.”

Milne’s Senate bid is his second foray into politics. In 2014, he ran a longshot bid to unseat Gov. Peter Shumlin, losing by just 1.3 percentage points.

“That movement changed Vermont. We stopped a lot of reckless Peter’s behavior,” Milne said. “I think Pat Leahy is reckless as well. He’s just one of 100, and it’s taken maybe 42 years for Vermont to figure it out and decide we want to try a new horse.”

Milne said Leahy, a Democrat who has served in the U.S. Senate since 1974, was out of touch with Vermonters, having been in office “since the Ford Pinto was the best-selling car in America.” Milne said it’s time for an outsider to represent Vermonters in Washington.

In the run-up to his announcement, Milne has been critical of Leahy’s advocacy for the EB-5 program that allows immigrants a path to permanent residency in exchange for investments in projects in the U.S.

EB-5-funded projects in the Northeast Kingdom are part of what the Securities and Exchange Commission called a “Ponzi-like scheme” by developers Bill Stenger, the longtime CEO of Jay Peak Resort, and Ariel Quiros, a Miami businessman.

In March, Milne demanded Leahy release all communications from his office about the EB-5 program.

On Thursday, Milne said Leahy’s past advocacy for EB-5 programs was “the tip of the iceberg” for why a new U.S. senator was needed.

Milne said he had been pondering a Senate run for over a year and consulted former Republican Gov. Jim Douglas on the matter. Milne said he believed he had a pathway to victory, though he acknowledged Leahy’s superior name recognition and fundraising apparatus.

Leahy has a 65 percent approval rating, according to a February poll from Vermont Public Radio. His campaign committee also has nearly $3 million, according to an April report with the Federal Election Commission.

When Milne first floated the idea last fall of running, he said he wanted to limit his campaign spending to $100. He later acknowledged that would be impossible because of expenses like mileage reimbursements that would have to be paid even if the campaign were staffed only by volunteers.

On Thursday, Milne said he planned to keep campaign costs very low and spend no significant amount of money before the Fourth of July.

Milne, who is president of the travel agency Milne Travel, said he had been approached by business friends in recent weeks offering to hold out-of-state fundraisers, but that he had refused.

“I think we can do this in a much different way,” Milne said. “June is going to be listening to people, validating what we believe. July is going to be launching our campaign and talking about what I am going to do as a U.S. senator.”

Milne recently sold a majority stake in Milne Travel to a New York City firm. Under the arrangement, Milne stays on as president, where he works primarily out of the company’s West Lebanon office.

Carolyn Dwyer, Leahy’s campaign manager, said Thursday that Milne had already broken his promise to run a principled campaign, referring to a VtDigger article from March when the businessman said, “We’re going to show up, work hard, be nice ... not run a negative campaign.”

“Scott Milne set a new standard in Vermont by running a 100 percent negative campaign before even filing to become a candidate,” Dwyer said. “That may be the Trump way. But it’s not the Vermont way.”

“Sen. Leahy looks forward to maintaining the standard he established his first campaign by engaging in a positive, issue-oriented campaign,” Dwyer added.