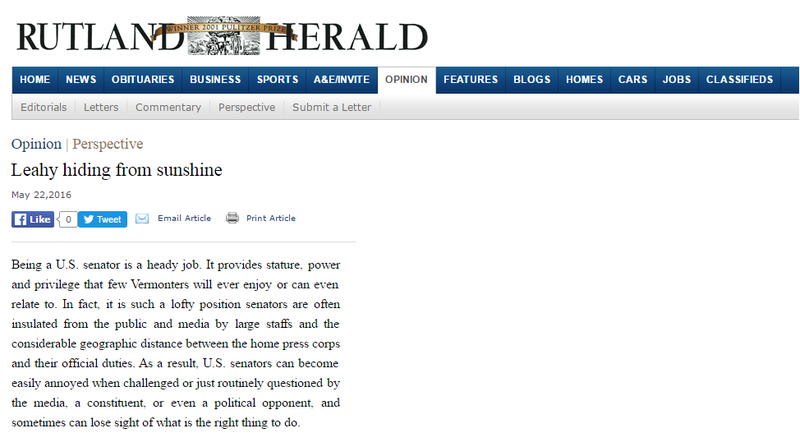 Being a U.S. senator is a heady job. It provides stature, power and privilege that few Vermonters will ever enjoy or can even relate to. In fact, it is such a lofty position senators are often insulated from the public and media by large staffs and the considerable geographic distance between the home press corps and their official duties. As a result, U.S. senators can become easily annoyed when challenged or just routinely questioned by the media, a constituent, or even a political opponent, and sometimes can lose sight of what is the right thing to do.

This seems to be the case with Sen. Patrick Leahy and the call to release his EB-5 emails.

Senator Leahy — who has written numerous endorsements of the media’s “Sunshine Week” to promote government transparency — flatly refused a request by his presumptive general election opponent, Scott Milne, to release all of Leahy’s (and his staff’s) emails related to the federal EB-5 program.

Is Milne’s request steeped in politics? Yes. Even Milne has traveled in support of Vermont’s EB-5 program and has spoken highly of it. Nonetheless, the request is not unreasonable, given the scope of the federal charges against Ariel Quiros and Bill Stenger, the two businessmen accused by the Securities and Exchange Commission of EB-5 fraud in the Northeast Kingdom. Leahy has been one of the primary advocates of the federal EB-5 program in the U.S. Senate, traveled abroad to promote the Vermont EB-5 program and was pictured at a ground-breaking ceremony with both Quiros and Stenger.

Unlike Gov. Peter Shumlin, whose office is required by law to comply with requests to produce public records, including emails, the U.S. Congress has conveniently exempted itself from such requests, even though the rest of the federal government must comply. Most members of Congress will advocate transparency and celebrate and endorse “Sunshine Week,” but of course that is for others, not for them. The double standard has constituents shaking their head.

Leahy said: “We get emails from battered spouses, people with adoption, immigration problems.” Vermont’s senior senator insists that he tells everyone that sends him an email, “I will keep your emails private.”

No one is suggesting emails involving the personal health, security or finances of citizens be released. What is being requested is the release of emails following the same standard imposed on the federal executive branch, and on Governor Shumlin right here in Vermont.

In the political business, this equating of a federal program where massive fraud is alleged to have taken place to something as horrible as domestic abuse is called deflection. It is an attempt at comparing two very dissimilar events with the hopes of linking the two together. For example, if you don’t believe the emails of a battered spouse should be released — which no one wants to see released or is calling to be released — then you should also agree that EB-5 emails shouldn’t be released. However, in this case most Vermonters fail to see the logic of this argument.

Obviously, refusing to release EB-5 emails raises a question that the senator should want to immediately dispel: Is there something in those emails that Senator Leahy doesn’t want to come out?

The powerful have several ways of fending off requests to do something they do not wish to do. They can refuse to comply with a request, and because of their power and position no one can compel them to do otherwise. Or, they can use their power to marshal resources — both people and money — to silence, intimidate or crush those that question or challenge them. In many instances amassing and maintaining power will make people do things that they would otherwise never contemplate doing.

However, with much power comes much responsibility. The responsible thing to do in this instance is for Senator Leahy to release his, and his staff’s, EB-5-related emails.

Mike Smith was the secretary of administration and secretary of human services under former Gov. Jim Douglas. He is the host of the radio program, “Open Mike with Mike Smith,” on WDEV 550 AM and 96.1, 96.5 and 101.9 FM. He is also a political analyst for WCAX-TV and WVMT radio and is a regular contributor to the Times Argus and Rutland Herald.