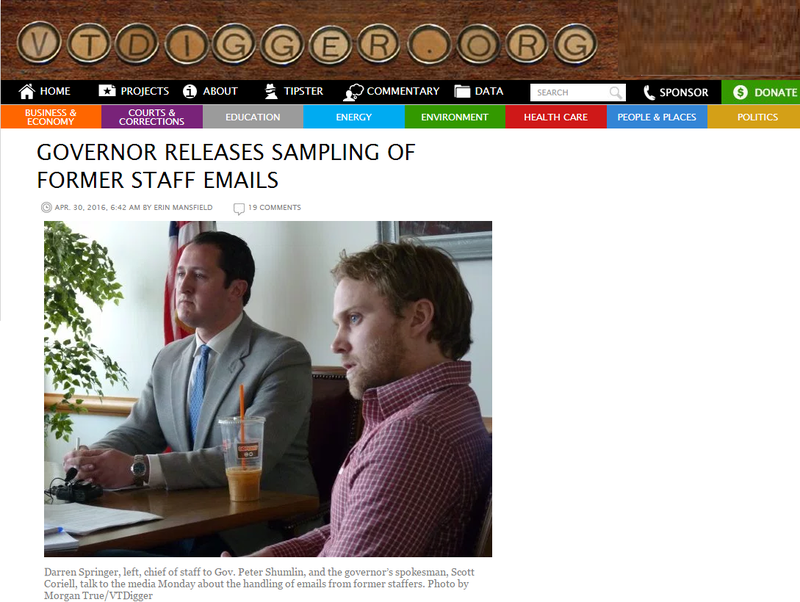 Gov. Peter Shumlin’s administration released 5,500 pages of emails from five top aides shortly after 5 p.m. on Friday. The emails were scheduled to be deleted earlier this month.

The emails are from five top staffers who left in 2013 or earlier: They include Bill Lofy, Shumlin’s former chief of staff; and Alex MacLean, who served as secretary of civil and military affairs before she was hired as a communications, investor relations and project manager at Jay Peak Resort.

Lofy’s emails total 866 pages, all from late 2012 and early 2013. In them, staff talk about press releases, scheduling, Shumlin’s speeches, committee assignments. Lofy also negotiates with the state to buy his government-issued iPad from the state for $400 when he leaves state government.

MacLean’s are 1,944 pages, largely communicaitons about press releases and the National Governor’s Association. In one email, she talks to Tom Torti from the Lake Champlain Regional Chamber of Commerce for agreeing to the governor’s request to accompany Torti on a trip to Cuba.

Scott Coriell, the spokesperson for Shumlin, said all staff in the executive office collectively spent 200 hours this week finding the emails in archives and then redacting information exempt under the Vermont Public Records Act.

Emails related to the state’s EB-5 lawsuit were separated out months ago, Coriell said. The attorney general’s office directed Sarah London, Shumlin’s laywer, to use various keyword search terms to separate the EB-5 emails from the emails that were originally going to be deleted. The emails were not reviewed by London before they were submitted to the attorney general.

The search terms are considered subject to attorney-client-privilege, Coriell said, making them exempt from disclosure under the Vermont Public Records Act. Attorney General Bill Sorrell did not respond to a voicemail left around 4:30 p.m.

Coriell said the 5,500 emails are “meant to serve as a representative sample of the type of correspondence at issue in the request to delete emails of former staff who left the Governor’s Office over three years ago.”

He said the administration sought to release emails from a limited period of time, and that he and his team “were completely focused this week with getting these out, and I haven’t thought beyond what the next step is, so we’ll do that next week.”

The administration first sought to delete the emails from the five former staffers April 1. The administration then repeated its request April 8, causing a dustup with staff at the secretary of state’s office, who said deleting them would not be in compliance with state law.

The Shumlin administration found out April 7 — the day before — that the U.S. Securities and Exchange Commission would file fraud charges against the two developers who control Jay Peak Resort, alleging misuse of money invested by foreigners through the federal EB-5 visa program.

VTDigger reported on the timing of the April 7 knowledge and the April 8 incidents, prompting suspicion among members of the public that the Shumlin administration was hiding emails relevant to the EB-5 state lawsuit. The administration said April 15 and again April 18 that the deletion request had nothing to do with the EB-5 investigation.

On April 8, John Quinn from the Department of Information and Innovation sent an email to Tanya Marshall, the state archivist, saying London requested “to delete all archived email for users that had been gone for 3 years.”

Marshall said in a reply on April 8 that London’s response “is not in compliance with state law, and destruction hasn’t been authorized. We have been working with the Governor’s Office for the last year and they are aware of it.” Marshall said an archivist within the Secretary of Administration’s office “was just there on Wednesday and reaffirmed that email can’t be handled this way.”

On April 15, when VTDigger first reported on Quinn and Marshall’s emails, Coriell said that any emails that London had sought to be deleted were considered “transitory.” On Monday, he described the emails that were to be released as “routine” emails related to people doing their jobs.

On April 18, at a press briefing with Shumlin’s top staffers, London provided a written statement saying that she placed EB-5-related records for MacLean and other former staffers in folders on her email account to make them easily accessible for the attorney general.