Shumlin Administration To Release Emails It Had Sought To Delete 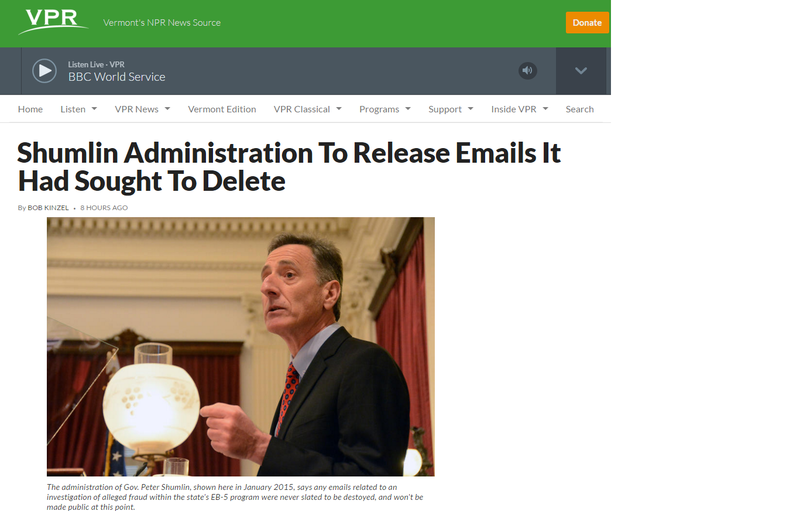 The Shumin administration says it plans to release tens of thousands of emails that it sought permission to delete several weeks ago.

The administration says any emails related to an investigation of alleged fraud with the state's EB-5 program were previously separated out and were never slated to be destroyed.

The governor's staff has strenuously maintained that there's absolutely no connection between the investigation and the planned destruction of the emails.

On April 8, officials first requested the deletion of non-essential emails from several former staff members, as first reported by VTDigger.

On April 14, officials announced a federal and state probe into allegations of massive fraud with the state's EB-5 program at Jay Peak and Burke Mountain.

Questions about a possible link arose because one of the former employees, Alex MacLean, left state government in 2013 to work for the Jay Peak project.

Shumlin's legal counsel, Sarah London, had previously decided to retain any emails that dealt with the EB-5 program as part of the governor's official archive, according to Shumlin’s press secretary, Scott Coriell.

Coriell says that’s why there were no EB-5 emails in the group that the administration wanted to delete. He also says Attorney General Bill Sorrell has asked that the EB-5-related emails not be made public at this point.

"Anything to do with EB-5 that was in former staff accounts has been under a litigation hold by the Attorney General for months." - Scott Coriell, Shumlin administration press secretary

“Anything to do with EB-5 that was in former staff accounts has been under a litigation hold by the attorney general for months,” Coriell says. “So those prior to the governor's counsel's request … any emails to do with EB-5 were segregated out of those accounts and saved."

Coriell says there are tens of thousands of emails from the former staff members and he says the administration plans to release them as quickly as possible.

“We are fully intending to respond to the public records requests that we've gotten … The volume is pretty substantial, so it may take us some time,” Coriell says.

Coriell says the administration has to review each email to be certain that it doesn't contain any private or personal information.

“You have to go through and make sure that any of that information is properly redacted,” Coriell says. “And we don't inadvertently share a Vermonter's personal information when it shouldn't be shared."

"Clearly the timing of the request to delete these emails is concerning. And so I appreciate their willingness to release them." - Burlington Rep. Chris Pearson

Burlington Progressive Chris Pearson is the lead sponsor of a House resolution that calls on the administration to release all of the emails that it requested be deleted.

Pearson says he's now satisfied with the administration's response to make all of these documents public.

“I've never asserted that anybody did anything wrong, but clearly the timing of the request to delete these emails is concerning,” Pearson says. “And so I appreciate their willingness to release them … I think this is a really good outcome."

The Shumlin administration says it hopes to release thousands of the emails by the end of the week.