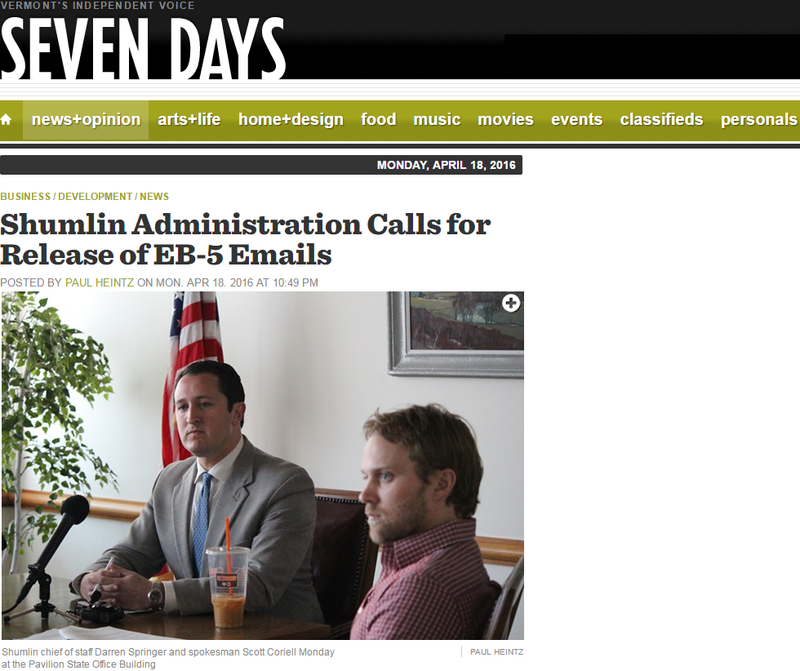 Gov. Peter Shumlin's four top aides convened a highly unusual press briefing Monday morning to beat back a report that a request to delete old staff emails was tied to an unraveling fraud case in the Northeast Kingdom.

"To conflate them is absolutely incorrect and inaccurate," Shumlin chief of staff Darren Springer told reporters in a conference room on the fifth floor of Montpelier's Pavilion State Office Building.

As Seven Days reported earlier Monday, the administration has been on the defensive since late last week, when VTDigger.org revealed that Shumlin legal counsel Sarah London had requested the deletion of email accounts belonging to five former staffers. Among them was former deputy chief of staff Alex MacLean, who subsequently worked as a contract project manager for Jay Peak Resort. The resort's owners, Ariel Quiros and Bill Stenger, were accused last Thursday by federal and state authorities of perpetrating a $200 million fraud in the Northeast Kingdom.

At Monday's briefing, Springer and his colleagues reiterated that any emails related to Quiros, Stenger and their various endeavors would have been protected from deletion had London's request been granted. That's because Attorney General Bill Sorrell ordered relevant agencies last October to protect all documents related to the state's investigation of the men.

To prove that the governor and his staff had nothing to hide, Springer said Shumlin's office had requested permission from Sorrell to provide the media with certain emails from the five ex-staffers.

"We are very comfortable with releasing the emails — the Jay Peak, EB-5 emails — from the former staff accounts," Springer said, referring to the EB-5 investor visa program, through which Quiros and Stenger funded their projects. "The attorney general has to make a determination as to whether or not that would prejudice our litigation ... but this office does not have any issue with those emails being made public."

Sorrell's office, however, does.

Late Monday afternoon, the AG said he would not grant the Shumlin administration's request.

"We do not want to prejudice the serious enforcement action that we have taken," Sorrell said, referring to the civil complaint his office filed last week against Quiros and Stenger.

Furthermore, he argued, releasing some emails relevant to the case might make it harder to protect others from public disclosure.

"We frankly don't want to be in the position where we say, 'Yeah, go ahead and release documents A, B and C, [because] someone's going to say, 'Why aren't you releasing documents D, E, and F?'" Sorrell said.

In the original version of its story, VTDigger reported that the administration learned April 7 that the Securities and Exchange Commission was about to close in on Quiros and Stenger and that London asked the Department of Information and Innovation on April 8 to delete the accounts. But as Seven Days reported earlier Monday, a previously undisclosed email showed that London made her original request to DII on April 1.

After State Archivist Tanya Marshall caught wind of the request, her boss, Secretary of State Jim Condos, asked the administration to stand down until both offices agreed on a procedure. None of the accounts have been deleted.

London herself could not attend Monday's briefing because she was running the Boston Marathon. She provided a written statement explaining the course of events and arguing that she had simply been preparing the office's archives for Shumlin's retirement next January.

Springer also defended London, saying she was "not a political person."

"It's probably the last thing in her mind that these two issues would have been conflated when she was working on the archiving," he said.