Leahy, 'Leading Champion' of EB-5 Program, Threatens to 'Kill It' 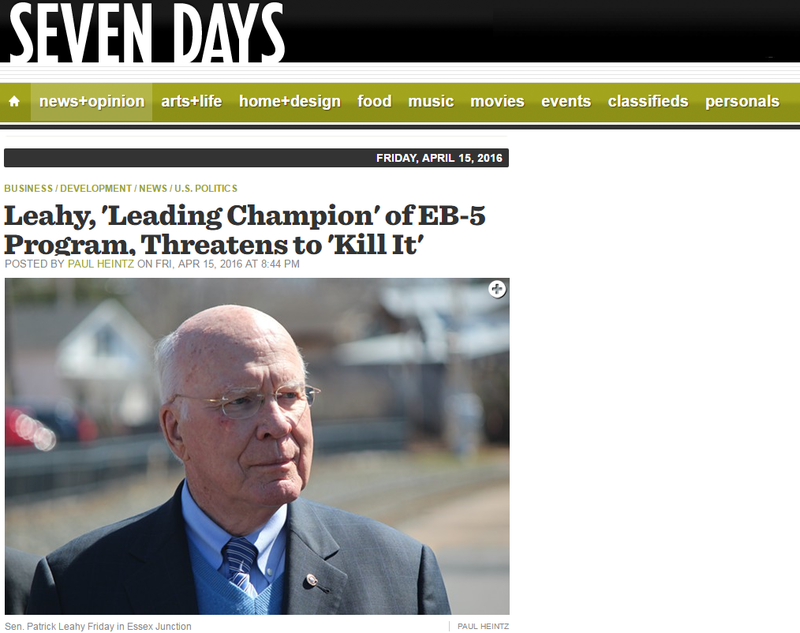 Leahy's remarks came a day after federal and state authorities accused a pair of Northeast Kingdom developers of misappropriating more than $200 million raised through the EB-5 program, which provides permanent residency to foreign nationals who invest at least $500,000 in qualified projects.

Speaking at an unrelated press conference in Essex Junction, Leahy told reporters he hoped the scandal would prompt Congress to enhance federal oversight of the program.

"If these reforms don't go through, we will not have an EB-5 program because Sen. [Chuck] Grassley and I will certainly do everything to block it," he said, referring to the Republican chairman of the Senate Judiciary Committee. "If these [allegations] are true, I will assume that we can now do what Sen. Grassley and I wanted to do — to put the changes into the EB-5 program — or kill it."

Leahy's comments completed an about-face that began earlier this week when he said the program needed "a blood transfusion, not a Band-Aid." As recently as four years ago, his spokesman referred to him in January 2012 as "the leading champion of the EB-5 investor visa program in Congress for more than a decade." Earlier Friday, former Republican governor Jim Douglas called EB-5 "Pat Leahy's baby" and said, "If you have a problem with the program, talk to Pat."

Even as he called for reform, Leahy disputed the notion that the program's oversight had been insufficient. He said he did not regret the role he played over the years advocating for its reauthorization.

"No, we created a program with oversight. And it's the oversight that's finding out what's going on," he said. "And if you read the stories, for example, in VTDigger or the [Burlington] Free Press, you see where the oversight here in Vermont, where they froze money. They were looking into it. That's what we need, and we need the kind of intensive rules that Sen. Grassley and I want."

Pointing out that authorities believe the fraud went undetected for eight years, Seven Days asked, "You're saying there was sufficient oversight?"

"And successful projects in other parts of the —" Leahy began, before pivoting to another subject without answering the question.

Like many Vermont politicians, Leahy forged close ties over the years with Jay Peak president Bill Stenger, one of the two men accused of wrongdoing.

"He's been a friend. We've talked a lot — even though he's a Republican. I'm a Democrat. I have a lot of friends who are Republicans. And I appreciate that," Leahy said. "So of course I'm disappointed, especially being in the Northeast Kingdom, a place where I've done everything to bring grants, everything [to create] jobs."

Like Douglas and Gov. Peter Shumlin, Leahy has spoken to potential EB-5 investors while traveling abroad. In April 2014, according to a spokesman, he and U.S. Rep. Peter Welch (D-Vt.) flew with other members of Congress to China and Vietnam to address unrelated issues. While there, both men made brief appearances at events organized by Stenger in Shanghai and Hanoi. In November 2008, Leahy also showed up to an EB-5 reception in Ireland. He said Friday he was always careful to avoid discussing the specific projects with potential investors.

Asked about the "thousands of dollars" Stenger had contributed to his reelection campaigns over the years, Leahy tried to correct Seven Days, saying, "Not thousands."

"Is that right?" Leahy asked.

"OK, I've asked to find out how much — that was in my last election. I haven't had any in this election," he said, adding that he had never received money from Stenger's partner, Ariel Quiros. "Whatever the amount is, I've asked my staff yesterday to find out if they have and give it to some charity in the Northeast Kingdom that would enable people's jobs."