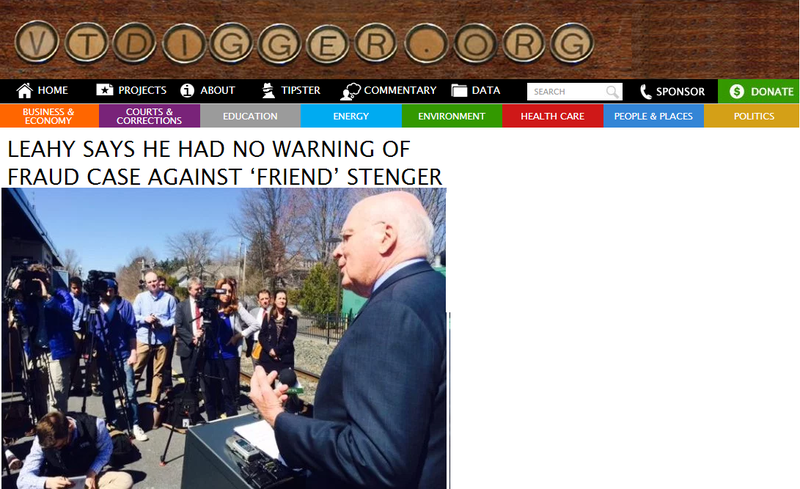 A disappointed Sen. Patrick Leahy said Friday he had no regrets about being one of the country’s leading champions for the EB-5 immigrant investor program and said reforms that he’s been pushing could have uncovered allegations sooner that two developers in the Northeast Kingdom were using the program to run a “Ponzi-like” scheme.

The senator said he first heard of the federal fraud investigation against Bill Stenger and Ariel Quiros from a reporter Wednesday after speaking about EB-5 reforms. Also Wednesday, officials from the Securities and Exchange Commission raided offices at one of the developers’ projects, Q Burke Mountain Resort, changing the locks and seizing equipment.

Vermont’s senior senator, who is running for re-election, said he was “gravely disappointed” to hear the allegations and worried about the workers in the Northeast Kingdom who might be affected. He made his comments after a press event in Essex Junction touting reforms meant to ease rail and air travel between the United States and Canada.

He said he would donate any past campaign contributions from Stenger and Quiros to a charity in the Northeast Kingdom.

Unlike Gov. Peter Shumlin and Attorney General William Sorrell, who said Thursday they were briefed by the state Department of Financial Regulation about the status of the case and the seriousness of the allegations, Leahy said he received no briefings from anyone in law enforcement or anyone else, including the governor, the attorney general’s office or the SEC.

“I was in the loop to the extent I saw the VTDigger stories. I had no reason to doubt that and some of the other stories. But the idea of the SEC, the U.S. attorney, no. And there’s no reason I would have been kept in the loop of that,” Leahy said.

The SEC on Thursday announced a 52-count complaint alleging fraud by Stenger and Quiros, claiming they misused $200 million of investor money and that Quiros diverted $50 million of that for his personal use.

Leahy said the measures put into the original EB-5 legislation provided oversight and that the Vermont system, where promotion of the program is handled by the Agency of Commerce and Community Development and regulation of the program by DFR, was a strong model. Shumlin split the roles of promotion and enforcement in February 2015.

“I think Vermont, we’re a little state, we’ve been doing — it’s my understanding — a great deal in checking into this and probably this might not have been uncovered in other states where they haven’t” set up a regulatory framework, Leahy said.

The allegations, he said, should provide evidence why the reforms he has been promoting should be adopted. Without those reforms, Leahy said, he would not support extending the program.

Under the EB-5 program, investors put up $500,000 in economically distressed areas like the Northeast Kingdom — or $1 million elsewhere — in return for permanent residency in the United States.

Asked if had regrets being one of the leading proponents of the EB-5 program, Leahy said: “Nope. Oh, no, no. We created a program with oversight, and it’s the oversight that’s finding out what’s going on.”

Asked if more could have been done, Leahy praised the Vermont oversight but also said reforms he pushed years ago could have uncovered the alleged scheme sooner had they been enacted. He acknowledged that’s “easy to say now.”

“It’s the oversight here in Vermont where they froze money, they were looking into it. That’s what we need and the kind of intensive rules that Sen. (Chuck) Grassley and I want,” Leahy said. Grassley, of Iowa, is the Republican chair of the Senate Judiciary Committee. Leahy is the highest-ranking Democrat. 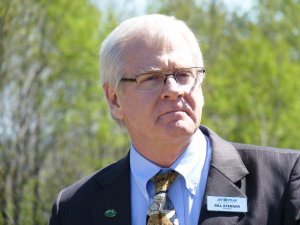 Leahy called Stenger a friend and said he would feel betrayed if the allegations prove true.

“We’ve talked a lot. Even though, I mean he’s a Republican and I’m a Democrat, I have a lot of friends who are Republicans, and I appreciate that. I know that and I especially appreciate seeing the men and women who are now getting paid a decent amount, so of course I’m so disappointed in this, especially being in the Northeast Kingdom, a place I’ve done everything to bring grants and everything else for jobs,” Leahy said.

Leahy said his staff was researching how much money Stenger has contributed to his political campaigns over the years, and he vowed to give an equivalent amount to a charity in the Northeast Kingdom. The senator said he believed he received $4,800 from Stenger in the last election cycle and had never received a donation from Quiros.

A check of election records showed $4,800 from Stenger in 2009. There was also a $500 contribution from Stenger to Leahy in 1998, the records show. Quiros is not listed as giving any individual contributions to Leahy, but he gave the Vermont Democratic Party a total of $22,000 between 2012 and 2014.

Leahy said he was worried about the workers and their jobs and not the developers. He also never mentioned the investors.

“I think of the men and women who were getting good-paying jobs in construction — carpenters, plumbers, electricians. I worry about them. I’m far more concerned about them than anybody else here because they had hope for jobs. It’s not the easiest place to get jobs,” Leahy said.

The senator said he never took a trade trip with Stenger but spoke at an EB-5 event Stenger held in Shanghai. But Leahy insisted that whenever he went to an EB-5 event, he never encouraged anyone to invest and instead spoke only of Vermont’s beauty.

“I was very, very careful as I always am on all of these things and say, ‘Vermont is a beautiful state. I love Vermont. Can I show you some pictures of Vermont?’ And I don’t know if anybody asked me do I think this is a good investment or not. If they had, I would have said I’m not an investor, I have no way of knowing,” Leahy said.

Leahy praised other Vermont projects that he said had “followed the rules,” including projects at Sugarbush resort and Country Kitchen, financed through EB-5 investment.