The brief bio of Tony Rodham on the website of a Philadelphia investment fund is vague about his business expertise but explicit about his political ties: “Mr. Rodham has worked with former President Bill Clinton on all his campaigns, from the House of Representatives to the Presidential Campaigns. … Mr. Rodham also worked for his sister, Hillary Rodham Clinton, during her Senate and Presidential Campaigns.” 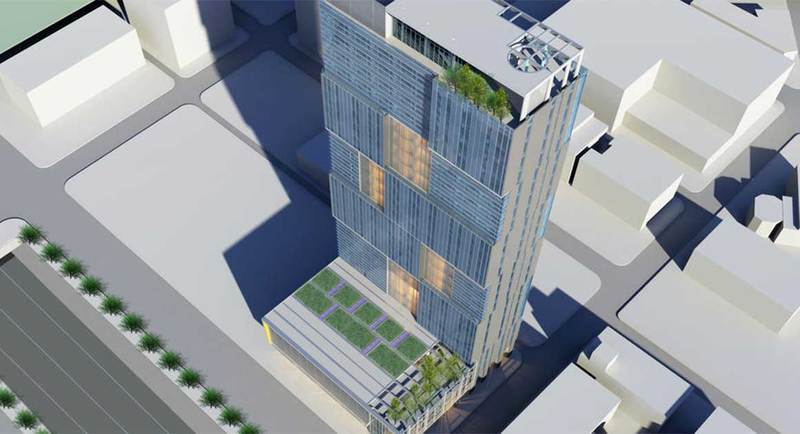 The firm, Global City Regional Center, touts Rodham’s role recruiting overseas investors who will put up $500,000 in exchange for visas to live in the United States.
Rodham’s involvement in the Philadelphia firm, which has not been previously reported, represents another example of his work for investment firms offering so-called EB-5 visas to foreign investors.
Chinese investors are still being sought for the proposed retail, residential and community center project in Philadelphia’s Chinatown, two people involved in the effort said.
A similar fund Rodham headed is under fire over claims it used political muscle with the Department of Homeland Security to expedite approval of the same type of investor visas. That effort was tied to a company building electric cars in depressed areas of Mississippi, according to an inspector general’s report. 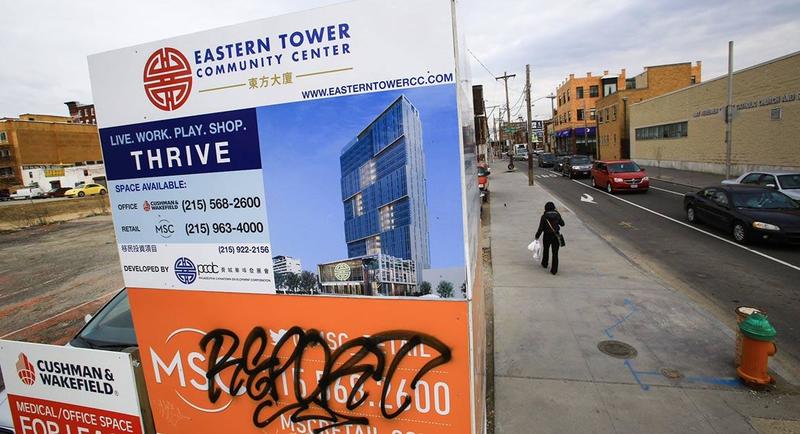 Experts in the EB-5 program say it’s become common for former politicians, their relatives and other celebrities to trade on their names, because foreign investors — especially those from cultures like China in which business and politics are deeply intertwined — believe that such contacts are vital to getting business done.
“From a marketing perspective, people think because a politician is involved, at least in China they think somehow it’s a better project or it’s got more name recognition,” said Steven Yale-Loehr, an adjunct professor at Cornell Law School.
Yale-Loehr did some of the early paperwork for the electric-car deal that involved Rodham and Virginia Gov. Terry McAuliffe, a longtime Clinton confidant.
The report issued last week by Inspector General John Roth declined to pass judgment on Rodham and McAuliffe, but it detailed a series of contacts with senior DHS officials that led agency whistleblowers to conclude that the car project and others with well-connected advocates received preferential treatment.

Rodham’s investment firm and the car company came under review by the agency’s anti-fraud section, and one employee noted in a report that Rodham’s sister headed the State Department, according to a document released in 2013 by Sen. Chuck Grassley (R-Iowa).
Rodham’s role as a traveling salesman for the controversial EB-5 visa program could pose questions for Hillary Clinton, the Democratic Party front-runner in the presidential race. Her brothers, Tony and Hugh, have been involved in various overseas business ventures, and Clinton’s political opponents have accused them over the years of trading on the Clinton connection.
In 2013, the Securities and Exchange Commission subpoenaed records from a bank for the investment firm involving Rodham and McAuliffe, Gulf Coast Funds Management, and from the car company it funded, GreenTech Automotive. The agency declined comment recently on the status of the probe.
McAuliffe, who has relinquished his interest in the car venture, has said he did nothing wrong in pressing a federal official to speed up reviews. Rodham has had no public comment. He did not respond to phone calls, and his wife, Megan Rodham, told POLITICO in a brief interview that she is unfamiliar with his business dealings.
Rodham’s title at the Philadelphia investment company is “Chief Global EB5 Investor Relations & Government Affairs.” The firm received federal approval in late 2013 to seek foreign investors who would put $500,000 into job-creating projects in Pennsylvania and New Jersey.

The Eastern Tower will continue the work of the 10th Street Plaza to bridge the Vine Street Expressway and connect the North and South segments of the neighborhood.
The Global City Regional Fund hopes to raise $33 million in foreign investment for the community center project, which would transform a vacant lot in Philadelphia’s Chinatown into a 23-story tower that would dwarf all other area buildings.
The fund also includes on its advisory board Chelsea Clinton’s mother-in-law, former Rep. Marjorie Margolies (D-Pa.), and former Rep. Joe Hoeffel (D-Pa.).
Hoeffel told POLITICO that Rodham is working with project developer Hassan Nasratullah to find Chinese investors.
“I know Tony has been very active in the EB-5 program,” Hoeffel said in an interview. “He came to one of our meetings of the board of advisers and talked about the program.”
Hoeffel said he believes that Rodham and Nasratullah traveled to China together to recruit. Nasratullah did not respond to repeated requests for an interview.
While the the Philadelphia project has lined up a $19 million bank loan and scored a $3.7 million state grant just before the 2014 election, it’s unclear how many foreign investors have signed up.

Competition for foreign investors has intensified in recent years as the number of visas granted to the Chinese under the EB-5 program bumped up against an annual cap for the first time and the number of U.S. investment funds seeking to tap overseas capital through the visa program mushroomed.
About 11,000 EB-5 visas were issued in the past fiscal year, up from about 6,000 the year before, according to State Department statistics. In the latest numbers, roughly 85 percent of the visas went to mainland Chinese.
“There’s a lot of recruiting that goes on,” said the Brookings Institution’s Audrey Singer, who has studied the program. “It’s like a circuit.”
The involvement of Rodham, Hoeffel and Margolies in the project helps win funding both at home and overseas, one veteran backer of the Philadelphia effort said.
“Some of it is definitely knowledge and network and some of it probably is optics,” said Andy Toy, a former board member of the Pennsylvania Chinatown Development Corp.

Indeed, President Barack Obama’s half-brother, Mark Obama-Ndesandjo, said in an interview aired earlier this year that he was approached by developers of a real estate project in El Monte, California, who wanted to use the investor-visa program to scare up funding.
“They said they wanted to pay a lot,” Obama-Ndesandjo told ABC News, adding that he turned down the offer because he didn’t want to appear to be trading on his ties to his famous relative. “People want to use the Obama name. … If you’re seen with somebody, if you take a photo with somebody who’s of stature or had a prominent family, in China this is very, very important.”
The investor-visa program was started in 1990 to lure foreign entrepreneurs to move tech startups to the United States in exchange for the promise of legal residency and, eventually, citizenship. However, few foreigners took up the offer.
In 1993, Congress made it easier for investors to band together through funds set up by regional centers. In addition, lawmakers loosened the requirement to create 10 jobs per investor for two years. Under the new rules, jobs created indirectly by a project or business could be counted toward that tally.
The changes spurred funding for real-estate projects, since the economic activity created by short-term construction jobs translates into jobs in other areas.

“Real estate is probably the most common EB-5 project,” said Yale-Loehr. “You can’t count the construction workers themselves since they don’t work for two years, but you are allowed to count the indirect effects. … As long as economists use a standard econometric model, the immigration service says ‘Fine.’”
Foreign investors, especially those from China, seem to have an affinity for bricks-and-mortar projects rather than startup companies in leased space.
“Investors like real estate because it’s a tangible thing to be part owner of a hotel or part owner of an office building,” Yale-Loehr added.
The EB-5 program was beset with fraud early on, in part because it is hard for investors overseas to check the bona fides of U.S. projects. Some investors also view the entirety of the $500,000 investment and roughly $55,000 in fees as a write-off in exchange for the green cards they and their families receive.
The long-running “pilot” program is up for congressional reauthorization in September and enjoys broad bipartisan support, in part because the investor-visa funding has become a go-to for governors, mayors and developers looking for funds to augment bank loans or government money.

There has been a massive surge in EB-5 visa applications. Hudson Yards, a $20 billion project on the west side of Manhattan, raised $600 million recently through the investor visa program and is seeking another $200 million. EB-5 funds also helped build the Barclays Center arena in Brooklyn and the Pennsylvania Convention Center in Philadelphia, which some Chinatown activists complained encroached on their neighborhood.
One continuing concern about the program is whether efforts to target it to underprivileged areas are producing intended benefits.
Singer said the program is “probably not” delivering on the goal of boosting distressed communities, since residents of the immediate area may not benefit from the construction. “The people laying the concrete could come from some other jurisdiction,” she said.
Supporters of the project to which Rodham is now attached say the community center would fulfill a long-standing dream to redevelop the gritty northern end of Chinatown. The “cultural” connection can also be a draw for Chinese investors.
“It is developing an underdeveloped area,” Toy said. “It’s not just creating another hotel in the center of the city. … It’s a catalyst for a whole quadrant of our city that was blighted, for a long time.”

“This is a project we’ve been working on for over a decade. … We didn’t just come up with it to get EB-5 money,” he said.