The Lucas Report on EB5 scandal 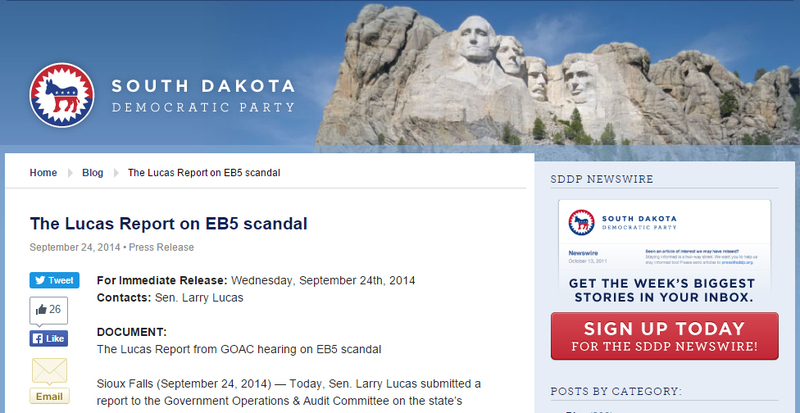 Today, Sen. Larry Lucas submitted a report to the Government Operations & Audit Committee on the state’s management of the EB5 program under Governor Mike Rounds and Governor Dennis Daugaard. The report can be downloaded at the following link:

The report, along with all the supporting exhibits, will be posted online by the Legislative Research Council. An appendix of the document follows the executive summary.

The executive summary of the report is below:

The information from this report, along with the attached exhibits, will show that Governor Mike Rounds, Governor Dennis Daugaard, and other state leaders knew about Joop Bollen’s contract with a company he owned to manage the EB5 program. Any competent public official briefed on the basic facts about the Darley litigation would have understood that the core controversy of the litigation is Joop Bollen’s creation of SDRC, Inc.

State employee Joop Bollen set up SDRC, Inc. to deceive anyone following his work, willfully concealed the Darley litigation from the state, and repeatedly violated South Dakota law in the process. Yet Governor Mike Rounds and the Board of Regents protected Bollen in court instead of firing him for his unethical and potentially illegal behavior.

In addition, this report estimates that South Dakota taxpayers spent nearly $500,000 for Joop Bollen’s office over the nearly two years that he had already privatized the EB5 program on January 15, 2008. Since the privatization of the program, Joop Bollen and his associates have harvested over $100 million in EB5 franchise fees.

The conclusions of this report reinforce a few simple unanswered questions:

· Who authorized Rounds employee Joop Bollen to sign a contract with himself to administer the EB5 program?
· If Bollen didn’t have authority, why isn’t anyone pursuing legal action against Joop Bollen to recover the EB5 franchise fees he and his associates have harvested?
· Why didn’t Governor Mike Rounds and the Board of Regents fire Joop Bollen after he dragged South Dakota into this lawsuit?
· Why did the Board of Regents continue to protect Joop Bollen from depositions and the production of documents in an August 2013 legal brief long after his unethical and illegal behavior was well known?