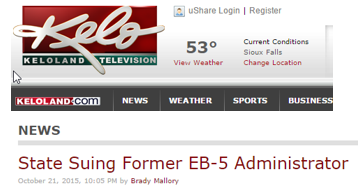 The State of South Dakota is suing the man and company that used to oversee the EB-5 program.  Court documents name Joop Bollen and his company SDRC Inc.  State leaders say Bollen owes them what could be more than a million dollars.

A lawsuit filed in Hughes County claims SDRC failed to put all the money in two accounts as promised.  Bollen, the company's president, agreed to fund them when he signed a 2009 contract with the State Department of Tourism and State Development.  SDRC administered the EB-5 program, and the accounts were supposed to pay for any EB-5 expenses.

In case you do not know what EB-5 is, or the controversy surrounding it, here is a quick timeline.  Congress created the EB-5 Immigrant Investor program back in the 1990s to stimulate the economy.  It is designed to recruit wealthy foreign investors for projects in exchange for visas.  In 2013, state and federal authorities began investigating it.  You may remember the name Richard Benda.  He was the Secretary for the Governor's office of Economic Development.  After he left office, he redirected a half million dollars from a state grant to pay his own salary to monitor EB-5 loans.   Benda killed himself as state officials prepared felony theft charges against him for alleged financial misconduct.  Results from the investigation found no wrongdoing on the state's part.

South Dakota terminated its contract with SDRC in 2013, but according to the paperwork, the company is still required to pay the money it owes to the two accounts.  In one case, the lawsuit alleges that SDRC did not fully fund a $350,000 account.  In the other, SDRC is accused of not giving the state access to an account that was supposed to have $1 million.  Governor Dennis Daugaard's Chief of Staff, Tony Venhuizen, says the price tag could be higher.  There's no lump sum listed in the lawsuit because Venhuizen says the state is still trying to figure out how much money it lost.

"We would need access to those records to determine exactly how much the state might be entitled for," Venhuizen said.

That is why the state is also suing SDRC for those records. The state also wants SDRC to pay $175,000 to reimburse its attorney's fees.

"Certainly the state has incurred costs relating to hiring attorneys and accountants in response to all the questions that came up when the EB-5 matter came to light a couple of years ago," Venhuizen said.

We left a phone message with Bollen and emailed SDRC.  We will let you know the company's response when we get it.  SDRC has 25 days left to respond to the lawsuit.

As we reported on Monday, the federal government intends to terminate South Dakota's participation in the EB-5 program because of administrative problems.  The U.S. Citizenship and Immigration Services says South Dakota's regional center is not promoting economic growth with the program.  Venhuizen says nearly all of the federal agency's findings relate to SDRC's previous management of the regional center.