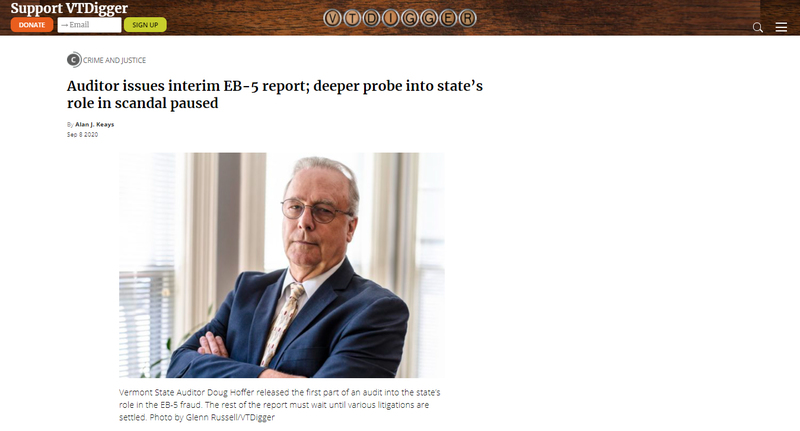 Vermont State Auditor Doug Hoffer released the first part of an audit into the state’s role in the EB-5 fraud. The rest of the report must wait until various litigations are settled.

Vermont Auditor Doug Hoffer has released an “interim report” on his probe into the state’s role in the massive EB-5 investor fraud scandal that largely tracks the already known history and holds off pointing any fingers.

The 32-page document reveals little more than has previously been reported by VTDigger and other news outlets over the past several years into the matter that has led to many lawsuits, settlements, and criminal charges against project developers.

The open questions remain: What did the state, which operated the Vermont EB-5 Regional Center overseeing a series of projects referred to by federal regulators as a “Ponzi-like scheme,” know about the fraud and why weren’t actions taken to stop it?

The pending criminal cases against project developers Ariel Quiros, Jay Peak’s former owner, and Bill Stenger, the resort’s past CEO and president, according to Hoffer’s report and statements by the auditor last year, is blocking his office’s wider investigation, at least for now.

“Since the criminal case and investors lawsuit are still pending,” the report released Tuesday stated, “as allowed by generally accepted government auditing standards, the SAO (State Auditor’s Office) has agreed to limit the work performed on the audit on the State’s role in the EB-5 program until these legal proceedings have reached a conclusion. “

That means Hoffer is holding off on interviewing current and former state employees until those matters are resolved. The criminal cases could run well into next year, while civil litigation stemming from investor lawsuits could be years away from conclusion.

The U.S Citizenship and Immigration Services terminated the state-run regional center after issuing a scathing review of the state’s management of it by allowing the fraud to continue for years. The state is still seeking a reversal of that decision.

Also, the state’s involvement in the scandal had been raised by Quiros’ attorney in the civil litigation against him. Melissa Visconti used an “unclean hands” argument to mitigate civil allegations brought by the Vermont Attorney General’s Office and the U.S. Securities and Exchange Commission.

Hoffer said Tuesday he decided to issue an interim report now to explain the “context surrounding the implementation” of the EB-5 program in the state.

“This would have had to have been done anyway,” Hoffer said of the gathering of information contained in the interim report. “This is effectively a huge background section of our normal audit reports.”

Putting it together now, he said, should save time down the road when other litigation has ended and his investigation can proceed.

“When these cases run their course,” Hoffer said, “it shouldn’t take that long for us to finish this up and to answer the question which everybody wants to know the answer to.”

As for the information in the document released Tuesday, Hoffer said, “Is it deserving of a report? Well, maybe not, but this is what we do, we issue reports.”

Hoffer said in the nearly eight years he has been leading the auditor’s office he does not recall ever issuing any other “interim” report.

“We’ve never had a report where we had to stop in the middle,” he said. “This is in the only one.”

In the interim report, Hoffer wrote that his office has reviewed “hundreds of thousands of emails and other documents,” and is planning to review thousands more.

Michael Pieciak, the commissioner of the state’s Department of Financial Regulation, said Tuesday that while the report does contain mostly information already publicly available, it does present it all in one place.

“I think the auditors did a really nice job of pulling it all together,” he said, adding the interim report also acknowledges that a great deal of work still remains to be done. “I think they’ve just done a ton of work and they’re at a point where they’re not quite sure when they can move forward with the next phase.”

When other litigation related to the EB-5 program will be resolved allowing the auditor’s probe to continue is difficult to predict, Pieciak said.

“It could be a while, it could be just a few months,” the commissioner said. “Hopefully, it’s sooner rather than later.”

Quiros, described by authorities as the chief architect of the fraud scheme that stretched across a series of development projects over nearly a decade, has recently pleaded guilty to federal criminal fraud charges and is awaiting sentencing.

Stenger has pleaded not guilty to criminal charges against him. He had also been named, as well as two other associates, in the same federal indictment as his former business partner, Quiros.

The criminal charges against the two men and two of their associates stem from a failed proposal to build a $110 million biomedical research facility, known as AnC Bio Vermont, in Newport.

Quiros and Stenger raised more than $80 million for that project from more than 160 EB-5 investors before it was shut down when state and federal regulators brought civil enforcement actions against the two in April 2016.

That project, which barely got off the ground, had been termed by the U.S. Securities and Exchange Commission “nearly a complete fraud.”

In those civil actions, regulators accused Stenger and Quiros of misusing $200 million of the more than $400 million they raised for several EB-5 projects, including several tied to massive upgrades at Jay Peak ski resort.

Quiros and Stenger later reached monetary settlements in those state and federal enforcement actions, with Quiros surrendering to the federal government an estimated $81 million in assets, with Jay Peak and Burke Mountain ski areas among them.

As part of the resolutions of those cases, neither Quiros nor Stenger admitted any wrongdoing.

It wasn’t until May 2019 that federal prosecutors filed the criminal charges against them. Quiros, as part of a plea deal with prosecutors, faces up to eight years in prison when he is eventually sentenced. That isn’t expected to happen until sometime next year.

A civil case that remains pending involving former state employees also still needs to be resolved before Hoffer can press ahead with his EB-5 audit.

In that one, Russell Barr, a Stowe attorney, brought a lawsuit in state court on behalf of a group of EB-5 investors.

Barr, in that action, has accused state officials of being complicit, at worst, and negligent, at best, in overseeing the Jay Peak EB-5 projects from 2008 to 2016, allowing the developers, Stenger and Quiros, the opportunity to bilk more than 800 investors.

The Vermont Supreme Court ruled last year that Barr can press forward on his claims against the Agency of Commerce of Community Development, which operated the EB-5 regional center, and two of its former employees.

It was at a new conference in July 2018 in Newport that state officials, including Attorney General TJ Donovan, announced a $2.1 settlement in the state’s civil enforcement action brought against EB-5 developers Quiros and Stenger.

Donovan also said at that time that he requested Hoffer conduct an audit to “answer that question of what happened in state government in terms of the management of EB-5.”