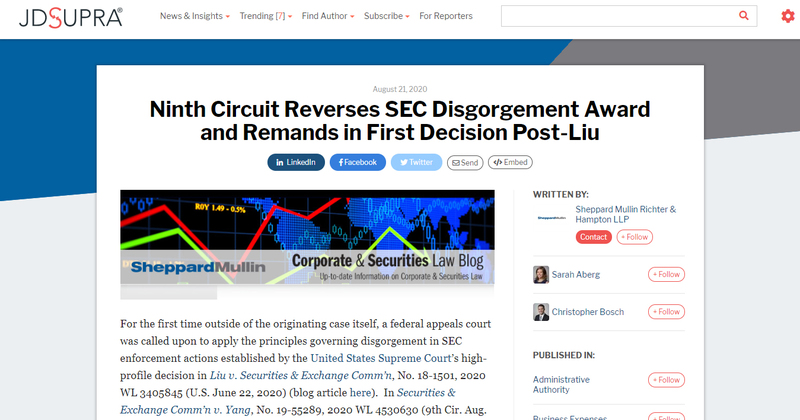 For the first time outside of the originating case itself, a federal appeals court was called upon to apply the principles governing disgorgement in SEC enforcement actions established by the United States Supreme Court’s high-profile decision in Liu v. Securities & Exchange Comm’n, No. 18-1501, 2020 WL 3405845 (U.S. June 22, 2020).  In Securities & Exchange Comm’n v. Yang, No. 19-55289, 2020 WL 4530630 (9th Cir. Aug. 6, 2020), the United States Court of Appeals for the Ninth Circuit reviewed a district court order, issued some eighteen months before the Supreme Court spoke in Liu, awarding the SEC disgorgement. In an unpublished memorandum decision, the Court of Appeals reversed the disgorgement awards and remanded the case to the district court to explicitly determine whether the awards comported with the requirements for such relief under Liu. The Yang decision drew attention because it served as an example of how the high court’s decision is impacting the appellate review of disgorgement awards.  If Yang is any indication, courts of appeal will be remanding cases to district courts with instruction to reach specific findings regarding compliance with Liu’s disgorgement requirements.

In Liu, the Supreme Court held that the SEC could seek disgorgement so long as the amount did not exceed a wrongdoer’s net profits arising from that party’s misconduct and was awarded for victims.  The Court called into question certain historical practices associated with disgorgement in SEC enforcement actions, such as imposing joint and several liability, failing to account for legitimate business expenses in determining the amount of disgorgement, and depositing disgorged funds with the U.S. Treasury. These practices, the Court explained, conflict with equitable principles and risk transforming a disgorgement award into an impermissible penalty.

In Yang, the SEC alleged that two defendants and their related entities defrauded Chinese investors who invested in defendants’ companies in an effort to obtain U.S. residency through the EB-5 Immigrant Investor Program. The EB-5 program allows non-citizens to pursue permanent residency by investing in growth projects so long as those projects provide jobs for U.S. citizens. The United States District Court for the Central District of California awarded the SEC disgorgement, some of which was imposed against defendants individually, and a portion of which was imposed on multiple defendants jointly and severally.  The only rationale provided by the court for ordering disgorgement was that the amounts represented ill-gotten gains obtained as a result of the alleged misconduct. The defendants appealed the decision.

The decision in Yang follows the Ninth Circuit’s ruling on remand from the Supreme Court in Liu.  However, in that case, the Ninth Circuit simply remanded in a summary fashion without issuing a substantive decision as to why it was unable to affirm the disgorgement awards on the existing record.

Following Yang, the United States Court of Appeals for the Fifth Circuit also issued a decision in Securities & Exchange Comm’n v. Team Resources, Inc., No. 18-10931, 2020 WL 4722012 (5th Cir. Aug. 13, 2020) (per curiam), vacating the district court’s disgorgement judgment and remanding the case where “the district court did not have the benefit of Liu’s guidance when it determined the amount of disgorgement. Application of Liu to the facts of this case should be left in the first instance to the district court’s sound judgment.”

While these unpublished decisions do not provide much in the way of substantive analysis, they do demonstrate an early pattern of appellate courts assigning to the district court the responsibility of identifying the Liu factors and ensuring disgorgement awards comply therewith. This approach makes sense given the nature of the Supreme Court’s decision requiring specific findings that disgorgement awards comport with longstanding principles of equity. Thus, it stands to reason that we will continue to see appellate courts delegating this fact-intensive legwork.