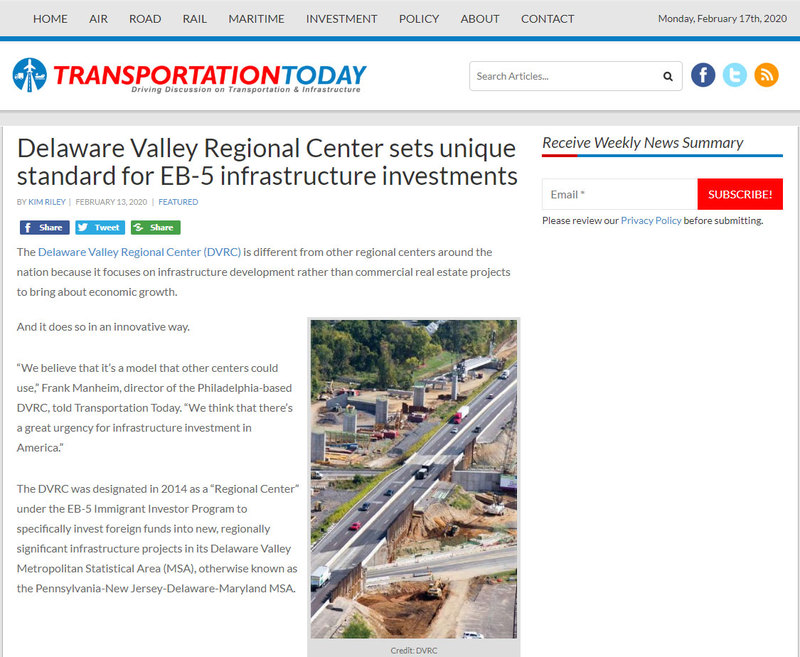 The Delaware Valley Regional Center (DVRC) is different from other regional centers around the nation because it focuses on infrastructure development rather than commercial real estate projects to bring about economic growth.

And it does so in an innovative way.

“We believe that it’s a model that other centers could use,” Frank Manheim, director of the Philadelphia-based DVRC, told Transportation Today. “We think that there’s a great urgency for infrastructure investment in America.”

The DVRC was designated in 2014 as a “Regional Center” under the EB-5 Immigrant Investor Program to specifically invest foreign funds into new, regionally significant infrastructure projects in its Delaware Valley Metropolitan Statistical Area (MSA), otherwise known as the Pennsylvania-New Jersey-Delaware-Maryland MSA.

For instance, the DVRC raised $200 million from EB-5 investments for its initial and signature project to construct the Pennsylvania Turnpike/Interstate-95 Project, providing a direct connection between the two major interchanges and allowing for a more efficient drive along the East Coast (for example, reducing travel time to New York City from Philadelphia by approximately 20 minutes). Indeed, this was the last piece of the Interstate Highway System on the East Coast.

“Joseph P. Manheim CEO and Founder of the DVRC decided that there was a real disconnect in the market,” said Frank Manheim. “The vision my brother had was that he saw that EB-5 immigrant investors were taking a significant risk for which they were getting a return which was virtually negligible.”

“The EB-5 investors allowed for lower returns because they were getting a green card. However, they were also taking significant credit risk which they, typically, weren’t aware of. This significant risk was due to the structures of the typical EB-5 projects.”

Joseph Manheim, he said, realized that the DVRC could reduce the structural risk for the EB-5 investors by providing them with high-quality infrastructure projects to invest in and at the same time providing the low-cost financing of EB-5 capital to municipal entities. This was in contrast to the private property developers who used the EB-5 investors as a replacement for some of their risk capital (i.e. equity or subordinated debt) and providing the property developer the cost savings.

“When you look at the market, what private property developers do is they look at EB-5 and think it could replace equity” or mezzanine capital, for example, said Manheim. “But the problem from a policy perspective is that that benefit goes directly to the pocket of the private developer.”

What the DVRC does instead, he explained, is use the EB-5 program to provide low-cost financing to municipal entities while at the same time providing high-quality investment projects for the immigrant investor.

Essentially, the DVRC is bringing more low-cost financing options to the municipal market.
By doing that, EB-5 investors get a high-quality issuer with a good credit rating, thereby creating much greater security for the underlying EB-5 investors because “they’re not going to be stuck in a complicated structure where they may be subordinated, they may never see their money back, or developers can play games with them,” Manheim said. “They’re going to be a senior lender to a high credit-rated municipal issuer.”

That was what Joseph Manheim pitched during his first meeting with the PTC when he basically told the commission that he could raise $200 million of capital out of China at a cost of 2 percent when municipal bonds at the time cost 3 percent or 4 percent, comparatively, “a significant savings,” said Frank Manheim.

With PTC’s approval, the DVRC’s chief executive then went to China, where he was able to raise that $200 million in less than 12 months for PTC I, which was the I-95 interchange portion of the project. The DVRC then took another 18 to 24 months to raise an additional $184 million for PTC II, the highway infrastructure improvement part of the project.

PTC II — which is the only project the DVRC is currently running — remains open to investors at the new investment amount of $1.8 million, he added.

So, while the DVRC is a standard EB-5 regional center in its structure, it only lends money to municipal infrastructure entities, Manheim said.

And why just concentrate on infrastructure?

Manheim said there are lots of reasons: you have to have issuers of bonds because you’re looking to provide value against the municipal bond market; the infrastructure players are using the municipal bond market so you’re looking to benchmark yourself as a lender against that market; there’s a need for it; there’s $4 trillion in municipal bonds outstanding but there’s another $4 trillion in infrastructure needs in this country, so municipal entities are always looking for new areas of financing or sources for capital.

Manheim added that it’s important not to cede the value to the private sector when financing public assets.

“Not that the private sector shouldn’t get value, but because these are public works, they’re public assets,” he said, “but in order to generate the returns on municipal bonds that would satisfy Wall Street, someone’s going to have to pay and that someone typically ends up being the public itself.”

Joseph noticed that one of the problems with infrastructure investment is that it happens in two places: either the municipal entity takes on significant amounts of debt, maxes out its balance sheets, and is unable to make investments, or people turn to Wall Street.

“And what happens with Wall Street is that you get these public-private partnerships, which must generate a return on equity of 15 percent so who’s going to pay for that? The public’s going to pay for that in higher tolls,” Frank Manheim said. “Off-loading the assets that are involved in these infrastructure investments to the private sector does not benefit the public.”

“What we think is important is that a municipal entity like the PTC just needs to have more innovation and more sources of capital available to them,” he said. “And given that they’re already high-quality issuers… there should be investors who want to get involved with that, especially on an international scale.”

The DVRC, he said, is trying to address the nation’s infrastructure needs by using innovative financing techniques.

“We think it’s something that should be done again and again throughout the country because it’s important that we address the infrastructure needs that this country has,” said Manheim. “Just doing it through Wall Street won’t suffice. We can do this; we think as a nation we are capable of improving our infrastructure using innovative structures which will ultimately benefit the public and not any one particular private stakeholder.”